In doing so, she became like millions of college students and lazy people, except that she doesn’t watch television very often, so it sits mostly unused. Instead, she opts to participate in things that keep her active, like spikeball or table tennis. Even when the Boston College junior sailor tries to relax, her mind becomes restless and she has to get active once again.

Who has time for television when you’re prepping for ISCA Nationals and, eventually, the Olympics?

Upon completing her junior year this spring, Reineke will finish out the season for BC sailing, which stretches into the beginning of June, before making preparations for the 2016 Olympic Games in Rio de Janeiro, Brazil. Seeking to become the second BC athlete from the Class of 2016 to participate in the Olympics—BC women’s hockey’s Alex Carpenter was the first—Reineke has the chance to finish her athletic career on the sport’s biggest stage.

he water wasn’t always so kind to Reineke, though.

Reineke’s parents, Fred and Sharon, signed the family up for a membership at the local yacht club—despite never having sailed themselves—when Erika was about 7 years old. They saw other children sailing in their Fort Lauderdale, Fla. neighborhood and thought it might be an interesting hobby for Erika and their younger daughter, Sophia, to pick up.

“My parents just signed us up, so I did it and I hated it at first,” Reineke said. “I was terrified of the wind, the waves, and just being out in the ocean.”

The youngest sailors at the Lauderdale Yacht Club are kept away from the ocean and trained in a safer space until they are skilled enough to traverse the open seas. Once Reineke became ready to sail on the ocean, she started making excuses to avoid the water at all costs: headache, stomachache, you name it.

“It was happening every weekend, and at first we didn’t realize what was wrong with her,” Sharon said. “But then we realized it was because she was afraid to go to the ocean.”

Eventually, Reineke was convinced to stick with the sport—partially bribed by her mother with cookies, partially enthralled with winning most of the regattas she entered. It’s a good thing she did, because if she hadn’t, the world would be without one of the best young sailors of this generation. Once Reineke got the hang of it, the gold medals started coming and haven’t stopped since.

The junior won the 2010 and 2011 Sailing Laser Radial World Championships, in addition to the 2012 Under-21 World Championships—all before she even enrolled at BC. Reineke added three consecutive NEISA Women’s Singlehanded Championships to expand her trophy case, and last week she received one of her biggest individual honors to date—2015 NEISA Conference Women’s Sailor of the Year.

Asked if she was bewildered to see her college-aged daughter accomplish so much at such a young age, Sharon said she wasn’t surprised at all by Erika’s success.

“Absolutely not,” Sharon said. “It’s not a surprise to us at all, and I hope she succeeds because she deserves it. She really does.”

eineke will not be able to complete her college career at BC in just four years, against her initial wishes. Though a chance to represent the United States at the Olympics would be a no-brainer for many, the decision to leave BC for a year racked Reineke’s mind for a while.

When Reineke first came to BC, head coach Greg Wilkinson presented her BC career as a five-year plan. While she hated it at first—she wanted to complete her degree in four years—her ascent to the top of the collegiate sailing world made that impossible. Still, she held some reservations about the year off.

“She had a very hard time making this decision,” Sharon said. “It was very hard for her because she absolutely loves her team. They push each other, they laugh together, and you can see their success now.”

Reineke chose BC over the College of Charleston and the University of Miami, and while sailing played a big part in her commitment, Reineke values her education. The environmental studies major cited the support from the BC academic community as one of the primary reasons she chose to sail for the Eagles and head coach Greg Wilkinson.

Since singlehanded competition takes place only in a few collegiate regattas each year, Reineke participates in the co-ed division, which Wilkinson described as an “open” category.

“In coed, we sail two-person boats, and there are no gender restrictions,” Wilkinson said. “Most women who steer the boat in college sailing compete for women’s national championships, but what makes Erika so unique—like a couple of women every couple of years—is that she has a huge presence on the co-ed side of sailing.”

Sailing is unique as a sport in that women can compete fairly evenly with men. In Reineke’s case, she does not only hold her own against the boys, but she can consistently beat them.

“She loves not being a ‘female’ athlete at times,” Sharon said. “She thrives on the competitiveness of sailing against men, because that encourages her to train harder and improve.”

he water was rough for the 2013 ISCA/Laser Performance Singlehanded Championships in Newport, R.I.—Reineke, just a sophomore, sits perched on her signature Laser Radial boat with a determined look of confidence on her face.

With winds whipping, waves crashing, chaos ensuing all around her, Reineke is still. She leans back, trusting her whole body weight to the boat, steering it with the precision of a heart surgeon. Reineke slides side to side underneath the mast as it shifts with the winds—she never holds one position for more than a few seconds.

Reineke’s trusty Radial darts around the Narragansett Bay, gliding and turning with the patterns of the breeze. Despite the less-than-ideal weather conditions, she manages to make her journey look graceful, peaceful, serene.

The water that once terrified her has now become one of her best friends.

“She is just a fish out of water,” Sharon said. “On land, she is such a goofball, but the minute she puts her foot in a boat, it’s a totally different story. It’s incredible to watch her.”

No longer scared by the vast mysteriousness of the deep blue sea, she has found a home in the ocean. 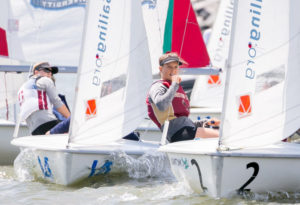