Home » At The Museum: Maintaining A Father-Daughter Tradition From Miles Away 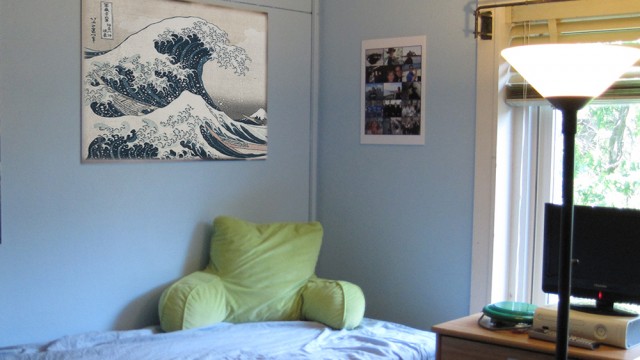 At The Museum: Maintaining A Father-Daughter Tradition From Miles Away

Whenever I describe my dad to someone, I begin by saying the same thing—he is the type of dad who took me to museums instead of baseball games. It’s the most accurate description of him that I can think of: someone who values spending time with others and refuses to ever stop learning. A little nerdy and a lot of fun, I hope that I may earn a similar qualifier at some point.

Although by now I have been to my fair share of ballparks, my dad’s outings of choice permeate my collection of favorite memories and define my knowledge of Washington D.C. As I grew up in suburban Maryland, a short drive from the nation’s capital, my dad and I had a different Smithsonian to explore on each of our trips. Limited only by the ticking timer of a parking meter, we traveled through time and space in a matter of steps. We skipped through decades at American History and ate like astronauts at Air and Space. Remnants of prehistoric monsters towered over us at Natural History, where my dad would nervously laugh as I climbed on the million-year-old petrified wood that sat at its entrance. By the time I entered middle school, I could give comprehensive tours of most of the museums, and I still give directions in D.C. according to Smithsonians instead of street signs.

Museums remind me of my dad, and though I wouldn’t deem myself an art critic or eccentric scholar, I have always been excited to check another one off my list. That being said, it took me almost two years of living in Boston to visit one of the city’s most frequented museums.

My first trip to the Museum of Fine Arts (MFA) was on Saturday, as an extra credit element for one of my classes this semester, of course. After my classmate, companion, (and co-editor) and I wandered past the Pollocks that graced the walls of the Art of the Americas exhibit, we made our way across the expanse of a courtyard to the visiting exhibit.

The MFA had just put a new exhibition on display, featuring paintings, drawings, and carvings by Japanese artist Katsushika Hokusai. Although I’m no Japanese art enthusiast, I actually recognized the main element of the exhibit: Hokusai’s print of the “Great Wave.” Hung everywhere from sushi bars to dorm rooms, the image of the rolling sea comforted me with familiarity.

My friend and I made our way toward the staircase, passing a massive poster advertising the exhibit with blown-up images of the print I was so eager to see. It wasn’t the first depiction of the print that we had seen that morning, and wasn’t the last we would see that day. The museum had plastered the city with posters of its latest exhibit—a great wave rolled past trains at the Kenmore T station, one crashed under the plastic frame on a bus stop just blocks before we reached the MFA, and one hung on huge, weather-proof banners in between the columns that marked the museum’s entrance.

I was ready for immense detail, for breathtaking expanse, to be awestruck by artistic ability. I was excited to be inspired, to feel small in the shadow of one of the world’s most influential artists. Scampering through the exhibit, I scanned walls of intricate floral arrangements, Japanese landscapes, and mythological dragons. Fixated on finding the famous work, we quickly moved from room to room, almost definitely ruining a few photos along the way. After lapping the exhibit twice, we finally asked a young security guard for guidance and he kindly led us to a nondescript wall at the exhibit’s entrance.

There was my great wave, a less than majestic 8-inch by 11-inch woodblock print that hung intermingled indistinguishably with the rest of the Hokusai’s pieces. This is a piece of artwork that Claude Monet had replicated for his personal collection, that has countless copies hanging in institutions of high art from the Met in New York to the National Library of France, and that served as inspiration for both John Mayer album artwork and the iPhone’s wave emoji. A few people stopped momentarily to consider the work, and continued to the next without any visible excitement.

Feeling lied to and dejected, I snapped a few pictures, bought my dad a postcard (which was almost comparable in size to the actual artwork), and made for the exit, passing a few more massive posters on my way out. After parting ways with my companion, I grumpily headed to Newbury St. to attempt to get started on finals studying. En route to my favorite study spot, I thought to call the museum expert himself.

I started the call off in an angered tangent, but as I detailed my disappointment, my dad began to laugh. He told me that the painting that I was so disillusioned with had hung in his dorm room when he was my age. It was one of his favorites, and he was impressed that I got to see the original.

I know that when I come home from school in a few weeks, my postcard version of the great wave will be hanging on our fridge. My dad will excitedly point it out, and I will laugh to myself about how dramatic I was to discount something so special over its size, be it an 8-inch by 11-inch piece of artwork or a nerdy tradition. No matter how insignificant it may seem, some things never fail to bring people together.