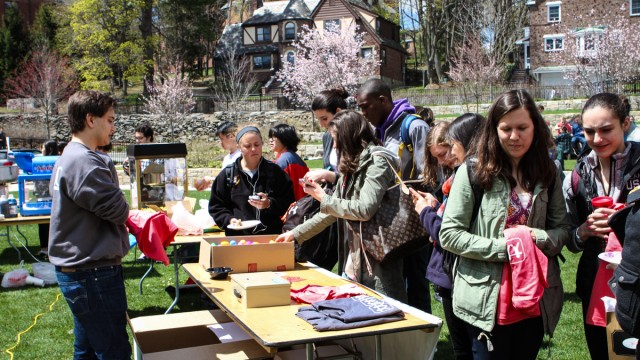 According to several student leaders, a number of previously undisclosed tensions with administrators underscored an initiative calling for Boston College students and alumni to stop donating to the school. Over 300 undergraduates and alumni pledged this week that they will not financially support the University so long as it does not offer an LGBTQ resource center. A letter and petition—penned by Nanci Fiore-Chettiar, outgoing president of the Undergraduate Government of Boston College (UGBC) and A&S ’15—circulated to a viral audience of at least 10,000 on Tuesday, according to Heights analytics, with Fiore-Chettiar identifying the University as having an institutionalized prejudice toward LGBTQ students. The release of a letter, petition, and a related video was scheduled to coincide with Support Love Day, which was hosted by the GLBTQ Leadership Council (GLC).

Several administrators familiar with the LGBTQ resources currently at BC, however, were surprised by the initiative—called the “For Here All Are One” campaign, by its creators—claiming there was a productive dialogue on the issue already going on before Tuesday’s push.

This is not the first instance this past year that students have disagreed with the administration on its handling of LGBTQ issues. Programs like Ignatian Q and Queer Peers have been denied or halted without clear communication between administration and students, according to Martin Casiano, the vice president of diversity and inclusion for UGBC and A&S ’15.

Fiore-Chettiar’s letter acknowledges that a LGBTQ resource center is not something that can immediately be created, but rather is the end goal in a multi-step process. She plans for the letter to be re-released each year.

“It is time we address the troubling reality that students who identify as gay, lesbian, bisexual, transgender, queer, questioning or elsewhere on the spectrum are not properly supported by this institution,” Fiore-Chettiar wrote in the letter.

Queer Peers is a program set up to educate BC students about issues regarding sexuality and gender. At the beginning of this year, members of GLC did the same thing they have done every year since the inception of the program. Queer Peer directors reached out to resident directors in residence halls and explained the program. Two sessions had been booked when one resident assistant told them that their resident director had said they could not hold the session, according to Andrew Engber, chair of GLC and A&S ’15.

The council began to investigate why the program had been shut down, but found it difficult to communicate with members of the BC administration—meetings were pushed back for weeks, and no clear rationale for the end of the program was given.

“The end result is positive, but the problem is that there was no communication along the way with us,” Engber said. “This is something that could have been done in a month, to be honest.”

In addition to the citing the breakdown of communication regarding the Queer Peers program, Engber and Casiano pointed to the cancellation of the Ignation Q conference as another example of the administration’s lack of institutional support for LGBTQ issues.

“They essentially told us it was never going to happen,” Engber said. “We decided we needed to say something about it. We don’t want to see something which is valuable for this campus just die.”

Casiano and Engber acknowledged that as leaders in GLC, their reach is limited—the people who come to their events tend to be those who are already passionate about problems of sexuality and gender. That is why, they said, programs like Ignation Q and Queer Peers are so necessary. They engage people who may otherwise not be participating in those conversations.

The issue of institutional memory—a problem for most campus groups, considering their complete turnover every four years—is particularly problematic for the LGBTQ community at BC. Relevant programs for these students are led by a collection of uncentralized offices and student organizations, with the majority of these initiatives run by current undergraduates. This means that the treatment and funding for these programs can change by the year, and the continuation of LGBTQ programs at BC is left to be decided by a series of administrative decisions each year.

According to associate professor of sociology Shaun McGuffy, the campus climate regarding LGBTQ issues has significantly improved in his 10 years on campus. But, more should be done, McGuffy said.

McGuffy, Engber, and Casiano all noted that the Catholic ideals of the University are made to stand as a barrier to progress on the school’s treatment of LGBTQ issues. Some of these Catholic values could be used to obstruct progress on LGBTQ rights, McGuffy said.

Engber and Casiano emphasized the lengths they go to to ensure their programming does not directly conflict with Catholic and Jesuit principles. For example, they will not talk about gay marriage. Rather, their programming focuses on the student experience, Casiano said.

“If we’re going to continue to talk about ‘cura personalis,’ we can’t continue to ignore that sexuality and gender are part of that whole person,” Casiano said. “It is rooted in our Jesuit values.”

Currently, there is only one LGBTQ group for undergraduates directly funded through the University, a gay-straight alliance called Allies. There are two other recognized LGBTQ organizations on campus, servicing law students and faculty members, respectively. GLC receives its funding through UGBC, its parent organization.

“We can make this work here.”

McGuffey said that the administration acts like the creation of more LGBTQ resources would be like “reinventing the wheel.” There are, however, other Jesuit schools that do have LGBTQ resource centers, Fiore-Chettiar said. Resource centers at Georgetown University and Santa Clara University opened in 2008 and 2011, respectively.

“We have other top tier Catholic schools who found ways to make this work so we can make this work here,” McGuffey said. “I think if we want to keep being a leading Catholic institution we need to be prepared for the future.”

Today, BC does offer institutional support for students who identify as LGBTQ. Caroline Davis, assistant for student outreach and support, oversees a support network for LGBTQ students.

According to Davis, DOS reaches out to these students through programming, one-on-one discussions, collaboration with students, and the Spectrum retreat, which is a confidential, reflective weekend away for students who identify as LGBTQ.

“I think that we provide great support to students in a warm and welcoming atmosphere, many students seek out our office to have one on one conversations and to be connected with resources on campus,” Davis said in an email. “As in all of the work that we do, we are consistently evaluating ourselves and collaborating with students, staff, and faculty to improve our efforts.”

Right now, DOS feels that the resources the administration offers are enough. Dean of Students Thomas Mogan said administrators in the office were surprised that those students involved in the petition decided to take that route rather than continuing the dialogue between UGBC and DOS.

“In terms of the resource center, we do not feel that a dedicated center is necessary to demonstrate our support for students who identify as LGBTQ,” Mogan said in an email.

Fiore-Chettiar anticipates that the process to bring an LGBTQ resource center to campus will be a long-term issue. In the letter attached to the petition, she challenges the University to fulfill its Jesuit goal of providing support and education to all students. She notes that the withdrawal of donations is not a rejection of BC—rather, it is because she and those who sign the petition believe in the future of the University. This problem is less about individual professors and their beliefs, and more about the stance of the University as a whole on LGBTQ problems on campus, she said.

“What I felt is there are a lot of administrators who want to support the community and do in the ways that their job allows them, but at the end of the day they are representatives of the university and have to represent University values, and right now that’s not consistent with having an LGBTQ resource center on campus,” she said.

GLC LGBTQ
For Marandola, Truman Is Next Step In Planned Career Of Service
Person Of The Year: Katie Dalton