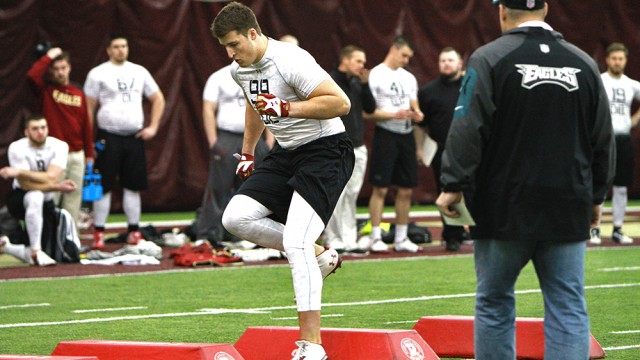 Three Boston College football players were drafted today on the third day of the NFL Draft, and a fourth is rumored to have signed a contract just hours after it ended.

Additionally, quarterback Tyler Murphy is reportedly signing an undrafted free agent contract with the Pittsburgh Steelers, according to Ross Jones of FoxSports.com.

Boston College QB Tyler Murphy to the #Steelers, per source

Silbermann was a graduate transfer who spent only one season in maroon and gold, but he made his mark on the team immediately. Silbermann started all 12 regular season games at right tackle, appearing in 97.8 percent of the Eagles’ offensive snaps throughout the year. Projected to go undrafted by NFL.com, Silbermann is predicted to be a guard in the pros because he lacks the speed to play on the outside.

Gallik was originally expected to be the only BC player drafted, and he was considered by many to be a steal in the latter half of the sixth round for the Titans. Gallik was a four-year starter at center for the Eagles and made 40 career starts at the position. A Second-Team All-ACC honoree, Gallik was also named a finalist for the 2014 Rimington Trophy, awarded to the country’s top center.

Mihalik, also projected to go undrafted by NFL.com, was taken by Philadelphia primarily for his size. The 6-foot-9, 295-pound defensive end started every game for BC last season and finished tied for second on the team with 3.5 sacks. The defense spends an extraordinary amount of time on the field in head coach Chip Kelly’s high-octane offensive scheme, so Mihalik could be valuable to Philadelphia as fresh legs off the bench.

Murphy’s signing with the Steelers does not come as a huge surprise, considering Pittsburgh was one of the teams showing the most interest in him at his pro day in March. While question marks remain about Murphy’s ability to throw at the professional level, his upside on the ground made the low-risk investment worth it. The Steelers already have four quarterbacks on the active roster, so barring a position change, Murphy will have to displace at least one of them in order to make a run at a roster spot for the 2015-16 season.

Murphy shattered numerous records at BC during his one year as a graduate transfer from the University of Florida, including the ACC record for single-season rushing yards by a quarterback. The Wethersfield, Conn. product led the Eagles to a monumental victory over No. 9 University of Southern California in September, BC’s first victory over a top-10 opponent in seven years.

Updated May 2, 10:25 p.m.: Linebacker Josh Keyes has also signed with an NFL team, joining the Tampa Bay Buccaneers, according to the Tampa Bay Times‘ Greg Auman. In his senior season, Keyes recorded four sacks, 66 tackles, and a forced fumble.

Updated May 3, 11:13 a.m.: Two more Eagles will also get cracks at making NFL rosters. Offensive guard Bobby Vardaro signed with the Minnesota Vikings, per Dan Zinski of The Viking Age. The North Reading, Mass. native was a four-year starter at left guard with the Eagles, missing only one game due to injury. Defensive back Manuel Asprilla will also get his shot, but with the San Diego Chargers, according to NFL Media senior analyst Gil Brandt. Asprilla started at cornerback for the last three years at BC, notching one sack, two forced fumbles, and four interceptions.

tyler murphy josh keyes Andy Gallik NFL draft
The Drawing Board, ‘Last Day Of Classes’
BC Will Be Considered For Boston 2024 Olympic Plans 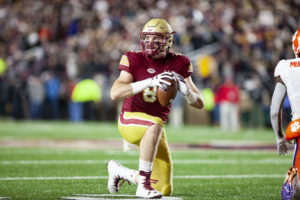 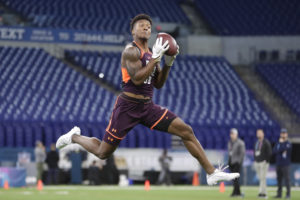