Home » Pixar Takes Another Worthy Leap With ‘Inside Out’ 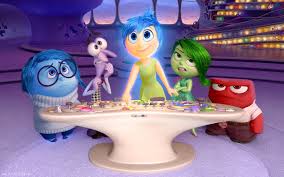 Pixar Takes Another Worthy Leap With ‘Inside Out’

Rare is the 20-something of today who has never fashioned Buzz Lightyear wings out of old cardboard boxes as a kid, triple-checked their bedroom closet for a Monsters, Inc. character gone rogue in the real world, or shed a tear or two while watching Up.

With 25 years of excellence in animation, Pixar has created countless characters whose adventures have become an integral part of the growth and development of their faithful fans—an ever-growing group who’ll arrive en mass to each premiere. Having grossed over $8.6 billion worldwide, the revenue of Pixar’s feature films alone is a testament to the company’s global success. With each additional movie comes a new wave of fans captivated by the company’s imagination.

Having already produced 14 massively successful feature films as well as a slew of shorts, Pixar Studios has established itself as a titan in the animated film industry. Consequently, the company’s virtually unrivaled quality constantly pits Pixar against its toughest competition: itself. By churning out film after hit film from their Emeryville, Calif location, animators faces the perennial pressure of having to outdo their previous works. With more than a dozen delightful films overflowing with ingenuity under Pixar’s metaphorical belt, one can’t help but wonder how long it will be until the company’s familiar “wow-factor” fizzles out.

But Pixar is projecting a big year in 2015. This subsidiary of the Walt Disney Company is prepared to release two full-length features over the course of 12 months. Recently, the media has been abuzz with news of Pixar’s latest project, the highly anticipated Inside Out, set for a June 19 release. The film—with the usual star-studded crew of familiar voices—is a rather ambitious project with the unique premise. It attempts to explain the ever-puzzling nature of human emotions. Pixar has proven for years that it knows the inner workings of a kid’s brain, and with Inside Out, writers / directors Pete Docter and Ronaldo Del Carmen are giving us the blueprints.

The movie offers more than a glimpse into the inner workings of the 11-year-old Riley’s mind—a control room of sorts where the young girl’s emotions work to regulate her mood. This area—aptly called “headquarters”—has Joy (voiced by Amy Poehler) at its helm with help from her friends Disgust (Mindy Kaling), Fear (Bill Hader), Sadness (Phyllis Smith), and Anger (Lewis Black).

Torn suddenly from her comfortable Midwest lifestyle, Riley must move to San Francisco for her father’s new job. Predictably, the big departure from Minnesota and arrival into a drastically different environment leads to a muddled mess of emotions within Riley. The film’s offbeat plotline focuses on the emotions’ desperate attempts to help Riley cope with changes and assimilate into her new life.

Tackling a complex project like the colorful and complex Inside Out—a piece whose premise  takes place predominantly within the cramped confines of a child’s mind—suggests a risky attempt by Pixar to captivate its young audience with an unconventional perspective. While its past movies worked to humanize everything from toys to tropical fish and insects to automobiles, attempting to animate intangible human emotions is a vastly different undertaking. Expected to be one of the company’s most intimate pieces to date, Inside Out should determine whether or not Pixar has preserved its perfect charm over the years.

According to overwhelming praise already expressed for Pixar’s newest feelings-focused venture, however, it appears as though the company has little reason to worry about its brave venture into the untrodden trails of human thought. Boasting a relatable plotline that reveals how everyone is susceptible to sadness and the confusion of competing emotions, Inside Out’s exploration of human vulnerability could prove to be the company’s most rewarding risk yet.

So what is it that audiences adore about Pixar? Perhaps it’s each film’s uncanny ability to be the perfect mix of heartbreaking and heartwarming. Maybe it’s the insightful take-home messages weaved expertly into original storylines that are simultaneously peppered with hilarity and hijinx. Even more likely, the secret could be Pixar’s signature style of making a children’s movie so enthralling for every age.

Or maybe it stems from some distant memory—some snippet of childhood filed neatly in the far recesses of the mind—of those days when mothers packed triangle-shaped sandwiches into a tin Toy Story lunchbox. A time when the biggest decision of your life was not which college to attend or what occupation to pursue, but which stuffed toy—Sully or Mike Wazowski—deserved to sleep with you that night. Those Pixar movie nights when, if only for an hour or so, worries faded into fantastic adventures and reality gave way to whimsical worlds.

Inside Out isn’t your average coming of age tale, even for the usually wacky Pixar. It joins the collections of unconventional stories Pixar has become known for and then raises the bar. Pixar has for years tapped successfully into the minds of their target demographic—children—and accumulated countless accolades as a result. By introducing its audience to talking toys, secret superheroes, and horribly forgetful fish, Pixar has created countless characters whose loveable personas win the adoration of anyone willing to watch. This time around, Pixar has infiltrated yet another child’s brain—and decided to make an entire movie about it.

And just like it has for almost two decades, Pixar will send yet another example of its computer-generated genius to the silver screen.

disney inside out pixar
Oh, The Places BC Football Will Go! (After Fenway And Ireland)
Financial Vice President Plans To Retire In December