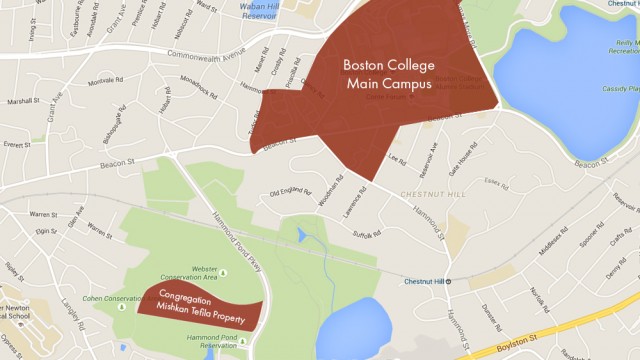 Boston College has made an agreement to purchase more property in Chestnut Hill. The University, which has a 130-acre main campus, bought a 24-acre parcel from Congregation Mishkan Tefila (CMT), Boston area’s oldest Conservative Jewish synagogue. The property is located at 300 Hammond Pond Parkway next to the Mall at Chestnut Hill, just 1.2 miles away from main campus.

The mostly open property is surrounded by conservation land and will likely be used for administrative office space and parking, according to University Spokesperson Jack Dunn.

CMT has occupied the property since the mid-1950s. In the face of a shrinking and aging body of members, the congregation is selling the land in an effort to consolidate its assets.

“We realize that we need to think of ourselves differently as we plan for the future,” CMT President Paul Gershkowitz said in a release. “Our congregation is older and smaller than in the past, and our current building no longer suits our needs. We are excited to chart a new course for CMT and the potential sale of the property allows us to do that.”

The sale still needs the approval of  the boards of both institutions this fall, and the transaction is expected to be finalized in May of 2016, according to Dunn.

The agreement reached stipulates that Mishkan Tefila can remain on the property for the next several years.

“A key to this deal is that CMT can remain on the campus until as long as 2019, allowing them plenty of time to plan next steps,” said Ted Tye, managing partner of National Development, the firm handling the transaction.

Although terms of the deal and how long BC has been interested in the property were not disclosed, BC said in a statement that its policy to explore the acquisition of more land around Chestnut Hill led to its discussion with Mishkan Tefila.