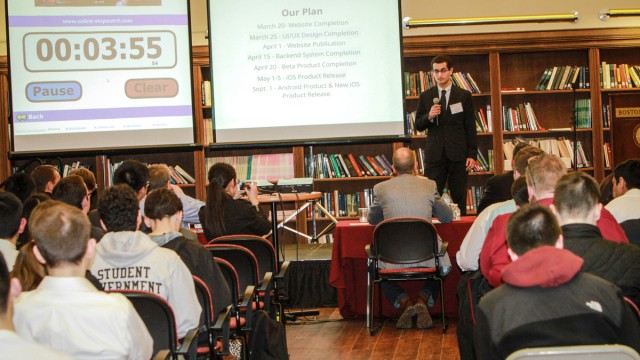 This semester, Boston College is opening the Edmund H. Shea, Jr. Center for Entrepreneurship, centralizing several new academic initiatives and existing business-focused clubs under a single umbrella organization, set to operate out of Cushing Hall. The Center is named for prominent entrepreneur Edmund H. Shea, Jr., whose granddaughters attended Boston College and donated an undisclosed amount to found the Center. The physical center will open late December or January, according to Carroll School professor Jere Doyle, who will lead the newly founded center as its executive director.

Programs focusing on entrepreneurship have been growing at BC for the past several years, including the BC Venture Competition (BCVC) and the elevator pitch competition. The Center will house these previously-existing activities and work to expand them. The primary goal of the Center, according to Doyle, is to create students ready to join start-ups while encouraging them to found their own.

“If you want to start your own business, it’s best to get out of school and go work for an entrepreneur first,” Doyle said. “We think that students need to learn inside and outside the classroom.”

‘What I do is bring the experience of being an entrepreneur back to campus.’

One of the Center’s goals is to become a research hub, so in addition to offering classes within CSOM, it plans to bring various workshops and speakers to campus. Eventually, the Center will host a program to connect students with internships in the startup world.

The Center plans to build on current campus organizations—BCVC, Women’s Innovation Network (WIN), the computer science club, and others—and offer additional resources to students involved. Robbie Li, the chair of BCVC and CSOM ’16, came to BC with little knowledge about entrepreneurship, but became involved in it freshman year. Li said the launch of the Center represents the University’s recognition of the important position entrepreneurship holds at BC.

“There are schools that are miles ahead of us in their programs, but the center lays the foundation that allows us to build something great and creates an environment that can foster the next generation of movers and shakers,” Li said.

The program was inspired, Lynch said, by all that BC students have been doing for the past decade. Much of what the Center will be doing is social entrepreneurship.

More and more social ventures have an ultimate goal to be self-sustaining, according to Mary Tripsas, the director of the Center. Tripsas oversees the academics and research of the Center and said that many of the programming being developed will be helpful to those interesting in pursuing social ventures, she said.

Though the Shea Center will be housed under the CSOM, Doyle hopes to promote an inclusive atmosphere. He plans to form an advisory council made up of students in CSOM, the Morrissey College of Arts & Sciences, the Lynch School of Education, and the Connell School of Nursing to expand the efforts of the Center to all students.

The Center will be physically located in Cushing Hall, the former home of CSON, rather than in Fulton, the traditional home of CSOM. That, Tripsas said, sends a strong signal that the Shea Center will be for all students.