Home » A Portrait Of The Columnist As An Apathetic Man 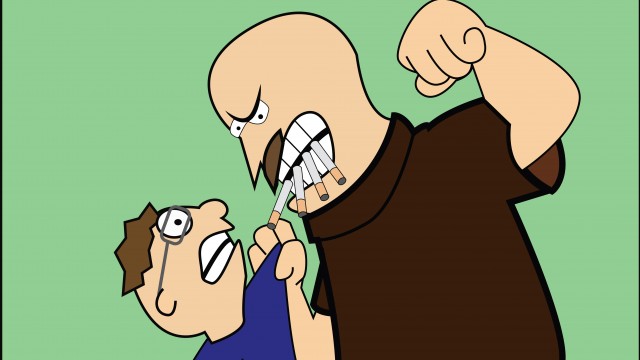 A Portrait Of The Columnist As An Apathetic Man

“The first sentence must draw the reader in immediately. It needs to grab them by the throat and drag them into the piece, whether they want to read it or not. Be exciting, be original, and please, dear God, do not start with a quote.” – Professor Winston Vatraizmet Hufflepants

Boston College is back in session, and my highly esteemed, critically lauded, read-by-millions column is back in print. Once again, it is my sworn goal to force an appreciation of Boston on the young, impressionable, internet-swollen minds of our generation.

In order to correctly complete this sworn goal, I must communicate to all of you with relatable generalizations and easygoing anecdotes that slowly and intelligently show you how lucky you are to go to BC and how amazing the city of Boston really is. Instead, I’m going to tell you an absurd story about myself because I can’t be constrained by my own goals.

On the very first day of classes, I was walking the quiet halls of McElroy Commons when a mustachioed man of menace stepped out from behind a door and punched me in the face. I fell to the ground, blood streaming from my nose. Looking up, I saw the face of Niles Corbitt, my personal editor (Yes, I am more than important enough to have a personal editor). Niles grabbed me by my well-tailored lapis lazuli colored lapels and hauled me to my feet. He had the look of a mad bull that just spotted the Communist flag. With four lit cigarettes dangling from his lips and tears of anger streaming down his cheeks, he screamed at me.

“Arthur, you miserable punk,” he yelled. “I read the first draft of your column today and it’s absolute trash. I ripped it up and flushed it down the toilet because that’s where it belongs you sack of smelly little rat turds.”

“Oh Gosh Mr. Corbitt Sir, man, friend above all friends,” I whimpered. “I’m so sorry. I’ll write another one, I’ll do better.”

He let go of my absolutely-fantastically-tailored-beautifully-dyed-exquisitely-stitched-lapis-lazuli-lapels and pushed me back. I stumbled, barely maintaining my balance, and stared at him with fear, terror, horror, and dread. When he looked back at me his face was no longer a mask of hate, but of disappointment.

“Where did the spark go Arthur?” he asked. “Your columns last year used to inspire people. They used to make people leap into the air and rush for the nearest T-stop. You had something amazing, little man, you had something real good. But this crap you handed me today had nothing. It made me want to move to New York, for God’s sake.”

I hung my head in shame. Then my nose began to bleed profusely so I lifted my head in distress. But when I looked up he was already gone, leaving me with nothing but my failure and humiliation.

There was a new column that needed writing, a column that would paint Boston as the fantastic city that it is. But I just didn’t have the spark.

As I wandered the campus, I noticed the scores of bright-eyed cherub-faced little freshmen (most of whom stand at least half a foot taller than me) and observed them in their new habitats. They were full of energy and vitality. The air was humming with their excited voices, beaming smiles, and fresh, sustaining, lifeblood.

It was really annoying.

As though to remind me of my lack of enthusiasm my dear, dear friend Sally Sunshine ran up to me as I crossed the quad and screamed in my ear.

As I wiped the blood from my ears, I shook my head and grimaced.

“No Sally Sunshine,” I said. “To tell you the truth, I’m not very excited at all.”

“Well you should be,” she said.

So Sally Sunshine forced me to follow her all the way to the Chestnut Hill D-line stop where she subsequently forced me to get into a train car and go to the city. Sitting next to Sally Sunshine, I gazed out the window dramatically and started to feel that old spark returning.

“Look at that sophisticated man over there,” I heard another passenger whisper. “He must be thinking some extraordinarily deep thoughts. He probably reads long and complex novels such as 2666 by Roberto Bolano.”

And with that I was back. Looking out the train window a smile broke out on my face. Everything came flooding back to me.

Boston is one of the best cities on the planet. The historical significance of the place alone is astounding. It has some of the best food, the most interesting people, and the most beautiful sights of any city that ever existed since the dawn of time. We’re all college students living in the prime of our lives. After this it’s nothing more than a downward slog toward death. Enjoy what you have! Explore Boston! Ride the T! Use exclamation points! Live your lives!

I turned to thank Sally Sunshine for showing me the light. But when I turned there was no one in the seat next to me. I looked around the entire train car and couldn’t find her. At first I was scared that she had literally died of excitement and been carted off the train in a body bag while I wasn’t looking. But then I realized with a sigh of relief that she had just been a hallucination. Nothing to worry about, I had just had an extended psychotic episode involving visual, auditory, and spatial hallucinations.

Smiling and relieved, I got off the train at Kenmore station and walked across the bridge. I knew exactly where I was going. Moving with the swiftness of a gazelle, I crossed the busy streets until I reached the base of that tower they call Prudential. I entered and made my way to the top floor, the observation area from which the whole city can be seen.

Standing above it all, I gazed across the city. I saw the ocean in the distance, the busy downtown below, the crowded neighborhoods surrounding it, and Gasson tower far in the distance. Raising a hand in salute, I knew that I was ready to begin another year.