Happy Feet: Alex Howell Is Out For Redemption

he whipping winds and falling rain at Virginia Tech’s Lane Stadium in Blacksburg, Va. should not have made for great football conditions, but last fall’s early afternoon game between the Hokies and the visiting Boston College Eagles had its fair share of offense.

Despite holding the upper hand for most of the contest, the Eagles found themselves trailing late as the Hokies’ sputtering offense suddenly jolted to life. Virginia Tech quarterback Michael Brewer constructed two consecutive 11-play drives to carve through BC’s defense and give the Hokies a one-point lead with just over four minutes to play.

With bowl eligibility on the line for BC, quarterback Tyler Murphy drove the Eagles down the field with precision and poise. Murphy brought the offense inside the Hokies’ 30-yard line, but on third down and short, a wall of Virginia Tech defenders denied running back Marcus Outlow a first down at the line of scrimmage.

Facing a fourth down with two yards to go, BC head coach Steve Addazio had a decision to make. He could have turned to his special teams, which had been dreadfully unreliable, and attempted a 44-yard field goal. He also could have tried to pick up the first down with his running back corps—a three-headed monster that wore the opposition down with hard-nosed, smash-mouth football.

Addazio took a moment to think. His decision could ultimately decide the game. He looked along the sideline and made the signal—field goal.

Junior kicker Alex Howell—physically imposing at 6-foot-5, but personable and articulate away from the game—trotted onto the field.

BC fans everywhere held their collective breath. Howell was a proven punter for sure, and his ability to pin the opposition deep in their own zone was unquestioned. His track record as a kicker, however, was far from comforting.

The fate of his team likely rested squarely on his right foot.

espite showing some signs of life in 2014, BC’s special teams floundered throughout the season.

Howell’s coffin-corner punting kept the Eagles in the game against Clemson, but BC was ultimately undone by a missed extra point by Mike Knoll. Howell’s missed 43-yarder late in the game against Florida State came back to bite the Eagles, as FSU marched down the field for a game-winning chip shot on its ensuing drive. Additionally, Howell’s missed field goal at the end of the first half against Colorado State was the difference in a 24-21 loss.

While last year Addazio employed the trio of Howell, short-range specialist Joey Launceford, and then-freshman Mike Knoll to tackle kicking duties, this year belongs to Howell. Listed as the top kicker, punter, and kickoff specialist on the roster, Howell will be handling all three special teams duties for the first time since Nate Freese did it two years ago.

Also like Freese, Howell struggled in his first extended collegiate action last season. The kicker from West Florence, SC connected on five of his 11 field goal attempts, including only three of nine from beyond 40 yards out. Incredibly, the Eagles missed seven extra points in 2014, although Howell was only responsible for one of those misses in the game against Wake Forest.

Freese bounced back with strong play after a rough inaugural campaign, and Howell hopes to do the same. As far as Howell is concerned, last year’s results are just that—a thing of the past.

“I think last year was out of the ordinary for me,” Howell said following practice leading up to the first against the University of Maine. “We got it fixed and we’re ready for this season.”

To prepare for this season, Howell has relied on two extremely important figures in his life. The first figure that Howell constantly looks to for guidance is God. A co-leader of a Bible study group called Athletes in Action, along with teammate Justin Simmons, Howell is deeply religious—he can often be seen pointing to the heavens after making a kick.

The Bible study primarily consists of athletes—Howell named members from the baseball, swimming, basketball, and soccer teams—but the group is open to everyone.

The second figure is his brother, Jimmy, a former four-year punter at the University of Virginia. The elder Howell sibling has been Alex’s most influential adviser when it comes to football. Alex consults his older brother frequently, picking his mind about pregame preparations, postgame practices, and everything in between.

Howell recalls one piece of advice from his brother that he thinks about frequently while he is on the field.

Special teams coordinator Coleman Hutzler said Howell has been doing just that during camp this preseason. Hutzler, in his first year on the Heights, came to BC after his second stint at the University of Florida, where he held the same position.

The first-year coach at BC has worked with struggling kickers before—last season, he improved Florida kicker Austin Hardin’s field goal percentage by 16 percentage points in his only year with him—and he was excited to begin working with Howell since he was hired in January. Since then, Howell has been nothing but eager to improve.

“Alex is a tremendous person and leader for our special teams group,” Hutzler said. “He’s a guy with an unbelievably strong leg, and he is going to be a great weapon for us going forward. I’m excited for his season.”

Hutzler added that he had full confidence in Howell’s ability to not only handle jobs with all three special teams for the Eagles, but also to mentor Knoll and incoming freshman Colton Lichtenberg as they navigate the year. Howell learned the ways of college football under the guidance of Freese for two seasons, and he hopes to offer the same kind of leadership to the two younger kickers.

“Between spring ball and our fall camp, he has really taken it upon himself to be a leader for Mike and Colton,” Hutzler said. “He has both of them under his wing, and he’s done a great job with them so far.”

ining up his shot at the 44-yarder against Virginia Tech, Howell stood tall above the kneeling holder Murphy. Howell looked up, envisioning the ball soaring dead center through the posts, and breathed deeply, shifting his gaze back toward the beaten green turf.

One, two, three steps backward. He returned his glare to the goal posts and extended his right arm straight out, setting himself up meticulously. He sidestepped to the left, and then replicated the motion once more. Howell breathed deeply again—he understood the importance of the moment.

He shook his shoulders a few times, shedding his nerves and focusing completely on Murphy’s waiting hands. At Murphy’s call, the ball rocketed from the line and into his palms with a thud, overshadowed only by the sudden crunching of helmets and pads just a few yards ahead. Murphy placed the ball slightly tilted backward, laces out—just the way any kicker likes it.

Howell took two strides toward Murphy and swung his right leg back, planting his left just beside the ball. His cleat snapped back toward the ball as if his leg were made of elastic, and the pigskin was sent flying away just as the outstretched arms of Virginia Tech defenders swarmed him from all sides.

The ball didn’t have the traditional end-over-end movement that kickers aim for, and the ball wobbled a bit as it cut through the Virginia air. It was a hard, low kick, not especially pretty—the type of kick that makes you question whether it might have been tipped at the line.

But sure enough, the ball kept going, and going, and going, even when it looked like it had no life left. As is landed softly in the netting behind the goalposts, Howell embraced his celebrating teammates and trotted back off the field, his job completed for now. Before he reached the sideline, with a lifted head and outstretched arms, Howell praised God for guiding him in his work.

There will be more field goals to kick—more successes, for sure, and perhaps some failures.

Alex Howell returned to the sideline, knowing his job was far from over. 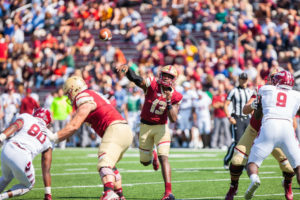 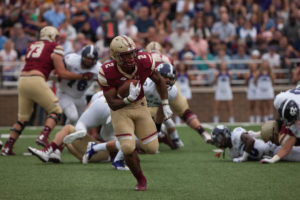 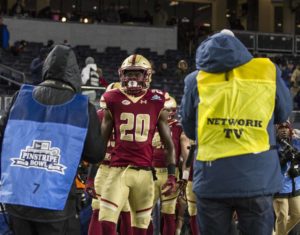