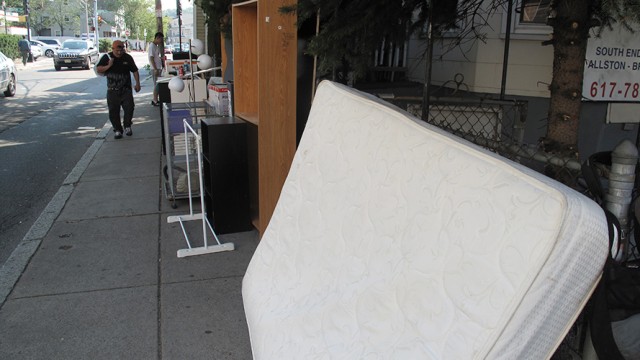 The days surrounding this year’s Sept. 1 move-in chaos came with over 3,500 citations issued by the City of Boston to off-campus housing landlords for violating property codes, as well as 450 housing, building, environmental, and sanitary violations.

With the start of each academic year, full-time residents of student-dense neighborhoods in Boston experience an abrupt interruption of the tranquil summer when students and their U-Hauls flood narrow streets and apartments change hands.

The majority of the write-ups issued this year stemmed from excessive trash, comprised of both garbage bags and sidewalk piles of unwanted gifts that have given rise to the day dubbed “Allston Christmas.”

For Maura Sanbourne, MCAS ’17, and her roommates, the burden of extra trash left behind by previous tenants fell upon them. The group moved into a house on Lane Park last week, and returned to find three separate fines for $25, $150, and $250 after the property’s landlord repeatedly failed to remove the trash in violation. The landlord initially neglected to clear trash out of the area, and stopped by on another occasion to pile more trash on the sidewalk after the first citation was issued. This landlord oversees 10 different properties in the Allston-Brighton area. Sanbourne’s landlord claims that he won’t pay any of the fine—it will be up to Sanbourne and her roommates to cover the cost.

Over the past week, the city issued 3,527 fines to landlords in Boston, with 1,692 falling on those that own properties in Allston-Brighton. There were also 447 property safety violations given, which do not require a fine to be paid. 79 were issued for missing or defective carbon monoxide and smoke detectors. Forty-five resulted from rat or bug infestations—including bed bugs in some cases. Twenty-four were issued for unsafe structures, and 30 for unsanitary conditions.

The record number of citations is a result of numerous requests from the public that the Boston Inspectional Services Department pay closer attention to conditions that are often cramped, unsanitary, and dangerous. A 2014 Boston Globe Spotlight investigation found that many students living off campus have no choice but to live in overcrowded properties that pose hazardous living conditions. In many cases, the landlords of these properties have not been held accountable for the damages.

Brighton property manager Eric Coughlin points out that there are many instances where violation of the “No More Than Four” rule doesn’t give rise to overcrowding.

“You can’t tell a landlord with a five or six bedroom property, ‘You can’t rent this to five or six people,’” Coughlin said. “You’re not going to be living on top of each other.”

Bostonians are calling for upcoming investigations (Aug. 28 to Sept. 2) to be more thorough, and for checkups to be routinely performed throughout the year.

The City has yet to issue a single fine for infringement of this rule, though they found hundreds of apartments in violation during a widespread investigation last year. The ISD is not allowed to force entry into residencies, and cannot force people to identify themselves either, ISD Commissioner William Christopher said to The Globe. He argues that the problem is it is virtually impossible to determine whether residents are undergraduates.

Looking to the future, Boston Mayor Martin J. Walsh, WCAS ‘09, has indicated that this problem is a top priority, and stressed the importance protecting the wellbeing of the thousands of college students living in the area. The City Council will hold several public hearings this month to address the issue of overcrowding in student apartments. The hearings will focus on how the City can more effectively and efficiently enforce the rule, prevent overcrowding, and ensure the overall safety and health of students living in off-campus Boston properties.