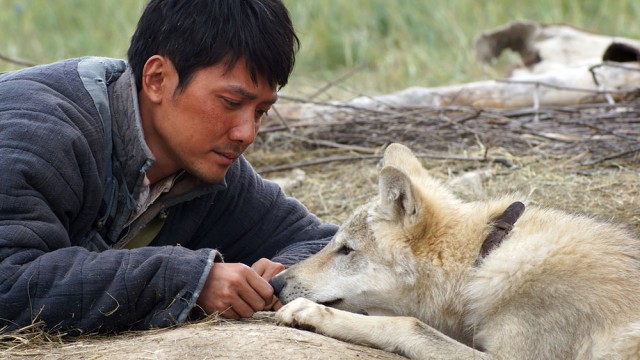 Although it may be a bit early to be speaking of Oscar nominations, French director Jean-Jacques Annaud’s latest film has already gained notoriety across the globe as a frontrunner for the Best Foreign Language Film award at next year’s 88th Academy Awards. Despite the fact that China banned the director for his 1997 biographical war film, Seven Years in Tibet, China Film Group persuaded the Chinese government to lift Annaud’s restrictions in order for Annaud to craft his latest masterpiece, Wolf Totem.

In 1969, Chen Zhen, a Han Chinese university student studying in Beijing, is sent by the Chinese government to teach inner Mongolian nomads and shepherds the ways of modernization and industrialization. Zhen slowly finds his place in the Mongolian tribe and learns more about himself and the world than he could ever teach to the migrants he is sent to instruct. Upon wandering off the main trail that would have led him back to his home, Zhen is surrounded and threatened by a pack of Mongolian wolves. Zhen feels conflicting emotions, as he is both terrified by the ferocious and attentive wolves and mesmerized by their gracefulness and majesty. Barely escaping his seemingly inevitable demise, Zhen grows fascinated with wolves and their role in the Inner Mongolian ecosystem.

Throughout the film, there is constant tension between the ever-rising industrialized society and the nomadic Mongolian people it threatens to engulf. The Chinese government orders its subservient Mongolian tribes to kill off the wild wolf populations surrounding the tall grass hills and valleys of Inner Mongolia. This order entirely defies the Mongolians ideology of the natural order and exchange that their god promotes and demands. In the heat of this slaughter, Zhen grows sickened by the intentions of the Chinese government. Zhen also fails to understand the Mongolians’ belief in a divine connection between the land, animals, and humans. Zhen wrestles with the conflicting ideologies and makes the viewer question their own thoughts on the progression of humankind and our impact on the environment around us.

Hoping to save a wild cub he finds in a wolves’ den, Zhen hides his “Little Wolf” away from both the Chinese officials and the Mongolian nomads, who would find mercy in a quick death to be the most suitable outcome for the cub. Zhen and Little Wolf’s relationship becomes the focal point of this story, as their relationship grows and evolves in cycles throughout the rest of the film.

Wolf Totem exudes both the brutality and tranquility of Mongolian lifestyle. This film is in no way meant for the faint of heart or easily squeamish. Most films tend to shy away from depictions of animal violence or cruelty, but Wolf Totem fully displays terrifying instances of both. Wolf cubs are thrown off cliffs to be given an easy and quick death. Horses kick wolves in the face with their vigorous and unstoppable hind legs as they run for their lives from a teeming wolf pack. Wolf packs drive herds of gazelles and horses into snow banks and rivers to freeze to death in order to keep their hunted meat fresh. On the other hand, the seemingly endless valleys and hills that make up Inner Mongolia and gorgeous sunsets and sunrises provide several brief but necessary peaceful interludes between the carnage that makes up most of the film.

Few films really necessitate an IMAX 3D viewing, but a lot of the power of Wolf Totem would probably be lost on a standard 2D screen or on a television screen. The sprawling hills and sunsets on the horizon are given such a palpable depth that the viewer feels transposed onto the Mongolian valleys. The movie theater as a setting entirely dissipates as the viewer is transported to this sublime and peaceful environment. The aerial shots of stampeding horse herds being chased by ravenous wolves are so enthralling that they put big-budget Hollywood blockbuster action sequences to shame. The juxtaposition of the animalistic and scenic nature shots in the film provides the perfect balance to an otherwise startling and bloody visual necessity.

The Best Foreign Language Film race has garnered a worthy first competitor this year. Wolf Totem captivates the viewer in a culturally specific tale that seamlessly relates to all people of all cultures in its breathtaking visual canvas. It reminds audiences of our everlasting impact on the environment and our relationship with other species around us. It may be violent and cringe-worthy at times, but its brutality is emblematic of the severe impact that we can have on the world around us and what the ignorance of our impact could mean in the grand scheme of time.

wolf totem
Shades Of Cool: Fall Fashion Preview
‘What Was The Most Interesting Thing You Saw This Week?’