Home » ‘The Visit’ Is Another Shyamalan-ian Debacle 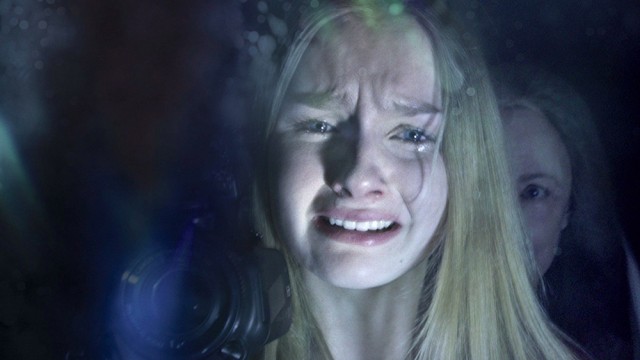 ‘The Visit’ Is Another Shyamalan-ian Debacle

In M. Night Shyamalan’s newest thriller The Visit, it’s over the river and through the woods to grandmother’s horror we go.

And by “horror,” I’m referring to the unsatisfying disaster the movie turned out to be. The Visit is horrible, not frightful. The classification of this anti-climactic cinematic failure is an unprecedented fusion that can only be described as a documentary-meets-comedy-meets-horror-meets-utter kind of disappointment.

With the film’s odd premise, Shyamalan succeeds in ruining even the most innocent of our childhood memories—those highly-anticipated visits to the grandparents’ place of “back in my day” anecdotes and baked goods abounding. Siblings Becca (played by Olivia DeJonge) and her rapper-wannabe brother Tyler (Ed Oxenbould) are sent to their estranged grandparents’ remote farm for the first time in their young lives. Anxious to finally meet the couple who raised her rebellious mother, budding filmmaker Becca decides to make a documentary detailing her first encounter with the estranged—and as she will soon discover, extremely strange—extended family members.

Starring a cast of virtually unknown actors, the low-budget film suffers initially from the absence of a well-known celebrity to draw public interest (perhaps throwing in a hunky Hemsworth brother or two would have worked to ferment some excitement—alas, this was not the case). Dialogue delivery was dull and unnatural; however, the uninspired performances were likely a testament to the poor quality of writing rather than the efforts of the actors themselves.

Within the film’s first few minutes, the audience already has had its fill of the story’s annoying pair of protagonists. It’s difficult to discern which is worse: Becca’s obnoxious know-it-all-ness coupled with an incessant supply of snarky comments, or young Tyler’s overexaggerated adoption of the black culture stereotype. Intended to diffuse the rare moments of much-needed suspense throughout the film (why Shyamalan decided it was necessary to reduce any tension in a horror movie remains a mystery), the self-absorbed tween Tyler sporadically breaks into of a frenzy freestyle rap. His unabashed misogyny and use of expletives seems incredibly out of place for a boy young enough to still play with Pokemon cards.

Upon arriving at the house—a normal, well-kept abode boasting too much natural light for any horror-film fanatic’s liking—the kids are given some ground rules. Pop-Pop says that bedtime is 9:30 p.m. (ugh, old people), and the basement is forbidden. Just as casual and conversational as that—without any thunder crack, lightning strike, or other foreboding element to reveal even the slightest semblance of sinister activity—their grandfather retreats to bed. Unlike that contained in quality horror films, the hype that is supposed to surround this oh-so-secretive space goes unmentioned until the last 15 minutes of the movie.

Other common elements of the genre appear only briefly in The Visit,— such as an old grandfather clock, an eerie soundtrack evocative of Insidious’ “Tiptoe Through the Tulips,” and hideously outdated wallpaper, and these are not used to develop any part of the storyline. Eliciting few gasps and screams from the audience, the film reveals Shyamalan’s failure to effectively produce moments of terror—as if the esteemed director decided to actively avoid all easy opportunities to scare. As director and producer of highly-acclaimed horror stories such as The Sixth Sense, The Happening, and Paranormal Activity, among others, Shyamalan’s failure to capture a similar supernatural suspense is upsetting in itself.

Though the cinematographic decision to structure the film as a documentary and use Becca’s footage exclusively was admittedly ingenious, the intended choppiness and purposely shaky shots failed to capture the intimacy producers were hoping for. Apart from this stylistic choice, few aspects of the camerawork stood out as unique in the lackluster thriller.

The Visit was intended to be a modern-day horror movie, the brainchild of a man well-versed in the art of screams and scare tactics. Instead, it is far from the chilling piece expected after the release of the film’s deceptively promising trailer. Like a middle-aged adult looking to be as “hip” and “groovy” as the kids these days, the film tried too hard to incorporate modern slang and social norms into a horror film setting (petition to ban the terms “YOLO” and “swerve” indefinitely)—all the while omitting actual elements of horror from the plot. Viewers left the theatre unsatisfied, expecting more blood, weapons, and the sinister hijinx expected of haunted houses.

The only scary aspect surrounding this flick is knowing that millions of unsuspecting viewers will waste some hard-earned cash and 94 precious minutes of their lives on The Visit—both of which will disappear forever, impossible to ever get back.

m. night shyamalan the visit
The Long Way Around
Stephen! Stephen! Colbert Is Back