Updated Sep. 16, 11:56 p.m.: At least five fire trucks and two ambulances arrived on College Road around 9:15 p.m. Tuesday to address an electrical fire in a dorm room on the third floor of Roncalli Hall. The Newton Fire Department reported no students were injured in the fire.

An overhead light fixture in a room was the source of the fire, which was extinguished by the building’s sprinkler system, George Arey, the associate vice president of student affairs, said in an email.

After several hours, the Newton Fire Department and BC Facilities staff allowed occupants to reenter the building. Boston College facilities maintenance staff is currently working with vendors to clean and reopen the impacted rooms, Arey said.

Dehumidifiers surround several rooms on the third floor of Roncalli that sustained water damage when the sprinklers went off. Among them is the room in which the fire originated.

“Students in impacted rooms have been offered alternative accommodations on campus,” Arey said, though it is unclear which on-campus housing locations were used for displaced students. “As a proactive measure, members of the BC facilities staff will be conducting a facilities assessment of lighting fixtures in Roncalli in the coming days,” he said. 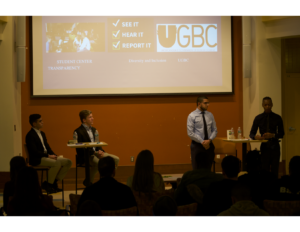