The Dream-Quest Of Unknown Libraries

I was sitting on the edge of my bed staring into the void and questioning the futility of earthly pursuits while listening to the uplifting feel-good hit of the century “When it’s Cold I’d Like to Die” by Moby—as I do many nights when I heard a noise. A tentacle slap against the window and the moaning of 1,000 lost souls, the deep and mournful cries of Carcosa.

“Oh jeez,” I said in my heavy Wisconsin accent. “Not this again.”

“That is not dead which can eternal lie,” a voice whispered from the window.

“I shouldn’t have eaten that burrito right before bed,” I said before passing out and falling into a nightmarish dream-state, as often happens to me when I eat burritos shortly before bed.

In this dream state, I awoke on a purple hill, surrounded by a desert of swirling sand, populated by deer who galloped back and forth. As I gazed upon this remarkable burrito-dream, I felt a hand slam down on my shoulder and grip it tightly. I turned and saw a face I hadn’t seen in years. Not since his untimely, yet surprisingly hilarious, death.

“Yes,” Great-Uncle-Jerry said in his gravely, I-just-ate-three-pounds-of-cheese-and-barbed-wire voice. “I am thy Great-Uncle’s spirit, doomed for a certain term to be stuck inside of your idiotic burrito hallucination dream thing.”

“Because you’re stupid and you need me to guide you through every step of your life. While you’ve been working your way through classes, work, impromptu a capella sessions, club meetings, and more, you’ve forgotten to do anything worthwhile in the City of Boston to write about for your column.”

With that, I awoke in my bed, wondering if it was all a dream. My roommate was on the other side of the room staring at me, his eyes wide and frightened. I had probably been screaming the lyrics to Neil Diamond songs in my sleep again.

That day, I went through my classes like a zombie (except for Dante and Calculus: A Socioeconomic Anti-Visual Exploration, which was a hoot and a half). The whole day I was waiting to go into the city and find something to write about. Long story short, what I should write about was presented to me that night, after eating dinner in the Copley Mall with some family members.

“I have to write a column about stuff and also things this week” I said. “If I don’t the burrito-ghost of my Great-Uncle Jerry will haunt my dreams.”

“You don’t have a Great-Uncle Jerry, Archer,” one of my relatives said. “How many times do we have to tell you? And what in the hell is a burrito-ghost? Seriously, I’m growing concerned about you.”

“Maybe I could write about this mall,” I said.

“I don’t think most college kids would be willing to sell their kidneys to shop here,” he said. “Figure out something else.”

I threw back my head in exhaustion.

“Why don’t you write about the library, since you never shut up about reading,” he said. “You could write an intelligent and thoughtful column about its architecture, layout, and historical significance. Also, since you’re 300 pages into Infinite Jest, it would lend you an opportunity to shamelessly brag about undertaking a monumental literary task by attempting to insert it organically somewhere in the column.”

I pointed a finger at him, “Boom, you got it. Too bad I’m already 582 words into the column, so I’ll probably just write some quick stuff about how cool it looks.”

And finally we arrive at the Boston Public Library, one of the key landmarks in the town of beans. Directly next to the Copley Green Line stop, it’s a very easy, pleasant trip for any Boston College student. The outside may not immediately strike you as impressive (except for the various author’s names which are carved into the wall), it being essentially a large building in the middle of a city, but the inside is surprisingly breath-taking.

High-ceilinged, architecturally fascinating rooms fill the upper levels of the library. A peaceful, Italian villa-esque courtyard sits in the middle of the building, with no roof and calm, blue skies above. A fountain sprinkles water into the air in the middle of the courtyard and I, your humble columnist, thought it was the perfect place to read, study, eat, and generally enjoy one’s life.

The other parts of the upper level boast equally beautiful areas. A large, high-ceilinged room, reminiscent of Bapst Library, is a wonder to behold. While studying there, I could almost pretend that I was doing important, smart things.

In my journey through the halls of learning, I was struck by the lack of books in this library. I was later informed that the fiction selection is housed in a terrifying and dungeon-like basement to which I didn’t dare travel. This was bothersome to me considering that the building is a library and books, arguably, should be its main focus. I supposed a metaphor for society’s lack of appreciation for learning and the great literary works could be forged from this, but then I also decided that I didn’t really want to be the one to forge it.

The Boston Public Library is a fascinating building with astonishing architecture. If you don’t visit it at least once during your time at BC, you’ve failed terribly at your duties as a human being. So pick up a good book, head on over, and enjoy the peaceful, iconic library as you further your studies. It’s a nice place to be and I know from personal experience that a visit can brighten an otherwise gloomy day.

library wandering
‘What Is The Worst Superpower To Have?’
From Rochester To Boston, Abbott’s Custard Scoops Up Another City 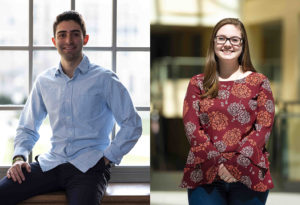 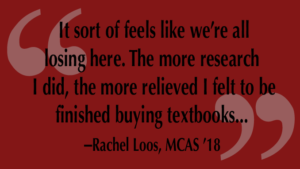