This August, Boston College defensive lineman Connor Wujciak spoke with ESPN about his team’s expectations for the 2015 football season. “We want to have a top-five defense in the country,” the senior said. And, at that point in time, it seemed a good goal. But now, with football having delivered two consecutive defensive drubbings, it seems a legitimate possibility—one that Wujciak and his fellow “blocks of granite” have been pushing BC toward.

Still, with the team set to take on No. 9 Florida State today, it seems probable that the defense’s success streak will come to a halt. Possessing one of the most explosive offenses in the country, the Seminoles will likely outscore the Eagles—albeit not without a challenge from the BC defensive linemen.

The linemen are a formidable bunch. BC’s four starters—Truman Gutapfel, Kevin Kavalec, Harold Landry, and Wujciak—weigh a combined 1,079 pounds, and each stand about 6-foot-3 inches tall. Though imposingly large, these players are also agile and skillful—moreso than they had been in previous years. Among those to become increasingly finesse-oriented are Landry, who focused on conditioning workouts during the summer, and Wujciak, who worked to refine his pass rush skills.

In addition to being big and quick, the BC defensive linemen serve as a veteran presence on an especially young roster. The team’s four starters appeared in all 13 of last year’s games. Over the course of those 13 contests, Gutapfel, Kavalec, Landry, and Wujciak contributed 110 total tackles, nine of them sacks. Their efforts along the line of scrimmage helped BC to rank second in the nation in run defense, keeping opposing teams to a meager 94.5 rushing yards per game.

It’s also noteworthy that the 2014 defense became the NCAA’s second-best run-stopping force without possessing sufficient defensive-line substitutes. That season, BC was undermanned up front, causing regulars to endure great fatigue.

This year, the situation is different. Addazio now has a plethora of options on his defensive line, with his roster boasting between eight and nine reliable choices. Among the most notable are senior defensive end Mehdi Abdesmad and freshmen linemen Zach Allen, Wyatt Ray, and Ray Smith.

Against Maine, the defensive linemen registered five tackles for a loss of 31 yards, including 2.5 sacks. The recently-returned Abdesmad made two of these sacks, earning recognition as the ACC Defensive Lineman of the Week. The following week against Howard, the line once again produced a remarkable set of statistics: six tackles for a loss of 33 yards, with three tackles counting as sacks.

Over the course of the contests against Maine and Howard, the line held the opposition to a total of 14 rushing yards, allowing just .29 yards per carry. Meanwhile the pressure brought on by the BC line’s pass rush aided in keeping Maine and Howard to a total of 88 passing yards. It also prompted two interceptions.

With the BC defensive line rendering two teams’ running games ineffective and with the linemen menacing both opposing quarterbacks, the defense allowed only three points … over eight quarters of play.

While Maine and Howard are not the most daunting opponents that BC will face, the impact of the squad’s defensive line should not be understated. Due to the play of BC’s linemen, the team has yielded the least yards in the country, topping second-place Kent State (309) by over 200 yards. The line has pushed, pressed, and smothered its way to the top, earning BC an early spot as one of the “top 5 defenses in the nation.”

But, despite these recent achievements, the BC linemen will meet their first roadblock of the season tomorrow. Taking on FSU, the defensive line will have to deal with bruising FSU halfback Dalvin Cook. Across two 2015 appearances against Texas State and the University of South Florida, the talented running back has amassed five touchdowns and 422 rushing yards. A Heisman Trophy contender, Cook will likely barrel past Gutapfel, Kavalec, Landry, Wujciak, and their teammates. Additional difficulties will be posed by quarterback Everett Golson and the FSU wide-receiving corps. In the air, the top-ranked team has accumulated a respectable 533 yards, with Golson completing 33 passes in 51 attempts and throwing no interceptions. Having such a solid passing game, and with such a powerful running game, the FSU team will have success marching down the field—en route to its third victory of the year.

Though this prediction is bleak, I anticipate that the linemen will challenge the FSU offense—even in defeat. Given the degree to which they suppressed Maine and Howard, it seems a reasonable expectation. After all, the line is a capable group—a group with the potential to establish BC’s defense as one of the toughest in the entire country. 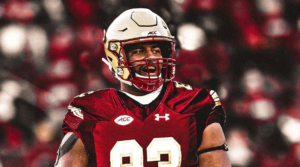