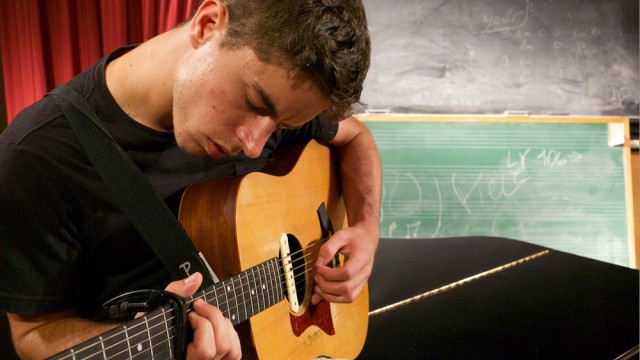 The venue was dimly lit, illuminated only by the vivid orange hue of the lights running along the stage at the very front of the room and the soft glow of the animated, bustling streets beyond the walls that seeped in through the edges of the windows. The Middle East, keeping with Cambridge’s eccentric spirit, exuded an air of vivacity Thursday night.

Singer-songwriter Alex Navarro, BC ‘15, along with his band, had a captivating presence as he swayed back and forth, guitar in hand, to the soft bends of melodic charm within his songs. His movements onstage, which were often both fluid and jolty, along with the vigor behind his raspy voice conveyed a sense of true passion.

The show, which began with a jolt of energy, transitioned to a more mellow tone with Navarro’s second piece, “Midway,” off his debut album Pardon My Eyes. The piece was a dazzling combination of an upbeat, quick tempo and sound embellished by original, heartfelt lyrics. Navarro’s graceful acoustic guitar riffs further exemplified his talent as a musical storyteller, as well as a thought-provoking performer.

Pardon My Eyes, which was released this past February, is available on Spotify, iTunes, and on his website, alexnavarrotunes.com.

The intersection of genuine candor and a sense of transcending mellowness is an essential aspect of Navarro’s performance style and allows his music to resonate with any listener. For instance, his cover of Neil Young’s “My My, Hey Hey,” which can be found on YouTube, does not fall under the weight of the original piece, as Navarro is able to personalize it and add a new dimension of significance to the song. His distinct voice also adds an element of singularity to his music. It is inherently raspy but also resonating and can be both powerful and gentle simultaneously.

Navarro’s third piece of the night was another cover, Garth Brooks’ “Much Too Young,” which, he dedicated to his brother Frank. Once again, Navarro was able to personalize the song in such a way that it felt as though it was his own, original piece. The country-folk backdrop of the original was less prominent as the song was sped up by the strum of Navarro’s acoustic guitar, giving the piece a smooth, swift edge.

Navarro performed three other songs from his debut album; “Love is Here and Now,” “Gone,” and “One More Time.” All three pieces embody Navarro’s signature strumming guitar, reflective lyrics, and raspy vocals, yet, all three were inherently different from one another in their own respective ways. “Love is Here and Now,” for instance, was upbeat in its sound and brutally honest, depicting a relationship between two people in both its finer moments and its difficult circumstances while ultimately echoing that love is only, “here and now.” On the other hand, “Gone,” was much slower and more introspective, culminating in the chorus with Navarro singing ruefully, “Gone without a moment’s notice. Gone so many words unspoken. Gone beat of my heart unspoken.” The third piece, “One More Time,” was the most distinct among the three, beginning with a keyboard accompanied by the backdrop of an electric guitar. Navarro’s voice echoed, repeating each line before swiftly changing pace and adopting a cool, rock and roll flare. The piece then picked up and slowed down throughout, featuring a wider array of instruments, while Navarro’s vocals add a terrifically eerie sound.

Overall, it was this masterful and quite enjoyable performance by Alex Navarro and his band that filled The Middle East with great vivacity on a Thursday night. Navarro, in an artist profile done on him by Boston Busking in 2014, explained that playing an original song to a receptive, intimate crowd was, “the realest thing I could experience as a musician,” and truly, Navarro’s performance at the Middle East was real, raw, and simply wonderful.