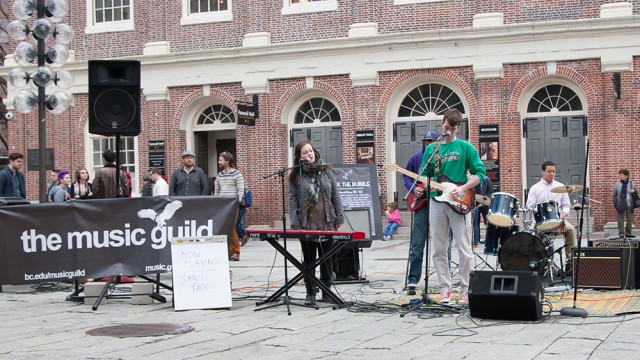 On Thursday night, the patrons of Lower Live were treated to a show. For its first major open mic of the year, the Music Guild filled the patio outside Corcoran Commons with performers, drawing a sizable audience.

The Music Guild is a collection of campus musicians headed by co-presidents Sean Seaver, MCAS ’16, of Small Talk, and Dan Lyle, MCAS ’16, of The Island. The Music Guild provides prospective musicians with equipment and recording space. It hosts informal Jammin’ Toast sessions—a songwriting/breakfast-eating event—open mics, and most prominently, the band showcases in the Cabaret Room. But more than just acting as the practical middle-man between musicians and the things musicians need, the Guild has continually taken upon the role of growing the BC music scene. The Guild orchestrated Break the Bubble, a Boston College music festival in downtown Boston last spring during the heart of Arts  Fest. This was a move that signaled the group’s aspirations to build audiences for BC artists beyond Chestnut Hill, where the interest in independent music can be lukewarm.

But last Thursday, the Guild brought its musicians and audience together in way previous open mics simply hadn’t been able to do. Previous mics in the Stokes amphitheater or the old Chocolate Bar in McElroy developed in quiet, stirring scenes, and were not as centrally located as this event on Lower Campus. The open mic on Thursday allowed students walking to the Plex or dinner to sit down and listen. The quality of the music wasn’t what would be expected in a more marquee event like the Band Showcase due to acoustical problems and a generally more imperfect structure. The casual atmosphere, however, leant itself to a better listening experience. Toward the end, Jim Devoe, the manager of Lower Dining Hall, delighted the crowd with a quick set.

In the past, open mic nights have been nights for musicians to gather and meet one another, somewhere outside of the normal flow of campus. But on Thursday, the Music Guild was able to integrate themselves and their music into the fabric of campus life.

It is a strong move from the Music Guild. What will prove more difficult in the coming months is replicating the success of Thursday’s event as the New England weather grows less accommodating.+