Home » A Look At BC Master Planning: Past, Present, And Future 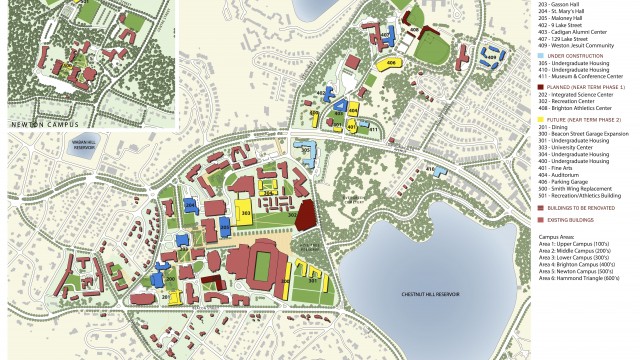 A Look At BC Master Planning: Past, Present, And Future

hen Boston College first opened its doors on Sept. 5, 1864 to its initial three professors and 22 male students, the Jesuit campus was comprised of only two buildings and 115,000 square feet—essentially one city block on the South End’s Harrison Ave.

Since its 19th-century inauguration, BC has accrued 147 buildings within 362 acres and nearly 152 years of history, spanning three campuses and boasting eight schools and colleges, 786 full-time faculty, and a coeducational student population of 14,100—a significant portion of this campus development owing to the University’s 2007 Master Plan.

ollowing its 1864 opening, the expanding institution quickly outgrew the main campus building, and the Church of the Immaculate Conception. They were constructed—in red brick and white New Hampshire granite—in 1858 under the direction of founder Rev. John McElroy, S.J. So in 1907, Rev. Thomas I. Gasson, S.J., purchased the 31-acre Lawrence Farm in “rural” Chestnut Hill for the location of a new, larger campus. The architectural firm of Maginnis & Walsh won the bid for BC’s original “Master Plan”: an enlarged campus planned six miles west of downtown Boston featuring English Collegiate Gothic style.

On June 19, 1909, ground was broken for the construction of Gasson Hall, (originally called the Recitation Building and then the Tower Building, but eventually named for Gasson, who led the relocation effort) which opened in March of 1913. In its wake followed St. Mary’s, Devlin Hall, and Bapst Library, opening in 1917, 1924, and 1928, respectively, and with their predecessor, collectively shaping the core of Chestnut Hill Campus.

While wartime collegiate enrollment was significantly lower than that of peacetime, the years following World War II brought with them great expansion for BC, and with additional acreage purchased surrounding Main Campus—the University bought land southwest of Gasson in 1941 and acquired the Lawrence Basin and the adjacent land in 1949—emerged the division of three distinct sections of campus: Lower, Middle, and Upper.

In 1974, the University acquired 40 acres of land previously owned by Newton College of the Sacred Heart—a site 1.5 miles from the Chestnut Hill campus that would later become the location of BC Law School and housing residence for approximately 800 freshmen each year. The 65-acre parcel that now comprises Brighton campus came into BC’s possession in 2004 after being owned by the Archdiocese of Boston. Formerly the location of the Cardinal’s residence, Brighton Campus is now home to the School of Theology and Ministry, established in 2008.

The University launched its “Light the World” campaign in October of 2008, striving to raise $1.5 billion toward advancing academic development, student and faculty growth and formation, research, financial aid, and capital projections—a fundraising initiative that concludes with the 2015-16 academic year, but is only part of an ongoing endeavor to fashion BC into the world’s leading Catholic university.

key facet of BC’s continuing advancement efforts regards construction projects, both in terms of renovation and new development. To that end, in December of 2007 the University announced its 10-year, $1.6 billion Master Plan to revamp campus and upgrade academic facilities—and thereby attract the world’s finest students and faculty.

Recently completed within the Master Plan, both St. Mary’s and Maloney Hall underwent significant renovation through expansion, restoration, and office relocation in the past two years. Maloney Hall was completely renovated, with different apartments moved around in the last few years—the last piece of that being the math department’s transition to the fifth floor this summer.

Additionally, Cushing and Carney Hall are undergoing renovations and modifications, with projects further down the line affecting the long-term trajectory of their development. Several CSOM offices were expanded and moved into Cushing Hall, and Cushing Hall underwent significant renovation when the School of Nursing moved into Maloney Hall, where Nursing now occupies the entire second and part of the third floor. “They have 50 percent more space than they had—they had really outgrown Cushing … and [this move] is really important to our academic mission,” BC’s Vice President for Planning and Assessment Kelli Armstrong said.

While University Health Services remains in Cushing for the time being, it will move to a bigger and better set of suites—with five patient rooms, 12 exam rooms, one isolation room for infectious diseases, and one treatment room—upon completion of the new 2150 Commonwealth Ave. residence hall.

lated to conclude by the summer of 2016—and thus ready for occupancy in the fall—construction on 2150 is underway, as workers progress steadily toward meeting the ambitious deadline. Next year’s seniors have first chance at the 490-bed hall, comprised of 60 six-person and 16 four-person apartments—all furnished with full kitchens—five floor lounges, 15 floor study rooms, a seminar room, three soundproof music rooms, and a commons area including a small cafe. With regard to sustainability in the new building, the University is looking to advance, employing water filtration, recycling techniques, and high-efficiency furnaces so as to conserve water and energy.

“The great thing about 2150 that I think students will notice right away is the additional community space—more lounges, more places to gather—which is something we really need for the campus,” Armstrong said. “It’s going to have a wonderful quad, grassy area in front so that students will be able to gather there, and then of course it’s just in a great location.”

Also to be completed by fall of 2016, 2000 Commonwealth Ave. will be renovated from its current state as an apartment complex into a 540-bed residence hall for junior and senior students. In addition to modifying rooms for student housing, the University is in the process of upgrading elevators and laundry rooms, building new common areas, removing the existing gym, and filling in the pool.

September of 2016 will bring with it the unveiling of the relocated and completely redesigned McMullen Museum and Conference Center, located in the former Boston Cardinal’s residence at 2101 Commonwealth Ave. Complete with climate control, a loading dock and freight elevator, LED lighting, and a glass atrium welcome center, the 30,000-square foot space was funded, in part, through the Light the World campaign.

“It is going to be beautiful, it will have a glass connector … it has that [MFA] feel, just gorgeous. It will also function on the first floor as a conference center, so people could come in, hold events there, and then enjoy the museum space upstairs … it’s a nice support of the arts at BC,” Armstrong said.

urther on down the line will be construction of an entirely new recreation center to replace the Flynn Recreation Complex—a project with which Armstrong is intimately involved. The completion of 2150 and 2000 will engender the razing of Edmonds and the subsequent raising of the four-story Rec Center, which will overlook the Res on one side and look up toward Gasson on the other.

While many of the Rec Center’s existing athletic and recreational programs will continue within the new building, the interior—and its facilities and equipment—will be much enhanced, featuring an elevated track, expanded fitness space, improved locker rooms, and indoor basketball courts among other amenities. “We’re all really excited about it because in many ways, it’s such a central part of the BC community, and we have really tired space,” Armstrong said.

A large challenge with many of these construction projects involves the balance between architectural continuity and modern innovation.
“Lower Campus isn’t as Gothic as Upper Campus, but we still want it to feel very BC,” Armstrong said. “We’re looking at a lot of different options there, but that’s a project we’re all really excited about. And we’ve had a lot of involvement with the Rec Center staff, we did student surveys, we did faculty surveys to make sure we understood what people most wanted with this new center. We looked at, I think, 20 different institutions and their Rec Centers to kind of pick the best of them for this. So this is going to be a great building—I can’t wait.”
Across from the Rec Center will be the University Center—a project currently in its planning stages.

“We have an idea of the programs in there, but we’re still sort of thinking about all the composition of that. So, if you think about how the Lower Campus will be transformed, it will be much more green, there will be many more quad spaces … and it will be anchored by the Rec Center on one side and the Student Center on the other, so it’s going to be phenomenal,” Armstrong said.

Regarding academic buildings, too, the Master Plan has significant development in store: for the past several years, the University has been conceptualizing an institute for integrated science and society to be located near Higgins—and possibly to include an engineering program.
“We’ve been talking about that for a number of years, but we’re really getting a lot of energy around this,” Armstrong said. “It was in our strategic plan to enhance our sciences, and the building is a companion to that. Because, again, we have these great science faculty, but our facilities, compared to some of our peers’, need to be upgraded, and we want to attract the very best students.”

BC recently acquired 24 acres of property 1.2 miles from Main Campus at 300 Hammond Pond Parkway, purchasing the land from Congregation Mishkan Tefila (CMT), the Boston area’s oldest Conservative Jewish synagogue. While the property’s potential uses are uncertain as of yet, the University is exploring different possibilities regarding not only long-term utility, but also the building’s short-term usage as potential performance space, symposium space, or conference space. “[It is] really exciting to have a nice block of land that close to BC because it gives us a whole other opportunity, and it also shows that BC is growing in the right direction—we’re expanding,” Armstrong said.

n terms of construction leadership for all facets of the Master Plan, each construction process goes out to bid and then through a selection process with BC trustees and senior leadership—the University considers the expertise of different construction managers and architects, as well as the pricing and range of experience based on building type.

“What we look for, like for the Rec Center, there are construction teams and architectural firms that are really good at those particular kinds of spaces, so we try to find the experts. And that, for a Rec Center, that’s an expertise that might be very different from the new ResLife expertise, so we really tailor it to what BC needs,” Armstrong said.

Within the University, each project has a project manager through the facilities department, as well, and senior leadership teams manage the intricacies of the process. “Fr. Leahy is involved in every single construction project in terms of oversight and making sure that we check in with him every stage of the way,” Armstrong said. The senior leadership teams depend upon office expertise surrounding and relevance to an individual project, often involving a combination of offices.

ince its inception, the University has grown over 181,000 percent, amassing acreage, inspiring steadily increasing enrollment, and ever excelling toward becoming a globally acclaimed Catholic university.

As for the Mods, they are here to stay—at least temporarily. “In the Master Plan years out, they will be re-designed with a townhouse model but for the foreseeable future, they will remain intact,” Armstrong said, via email.