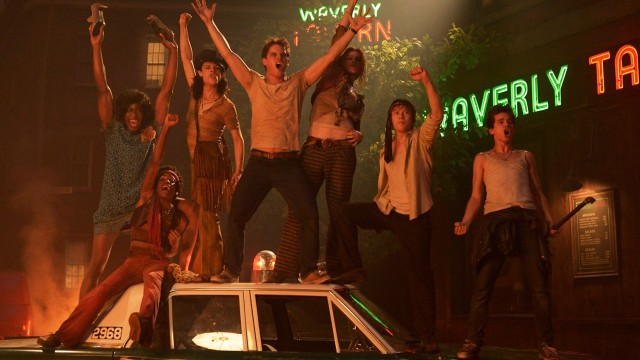 The atmosphere is thick with unrest, the air pierced only by pained cries of the people. A great injustice has happened here, and tensions today are higher than ever before.

While the somber scene illustrated above could certainly be applied to the pandemonium that ensued after senseless police brutality sparked the 1969 Stonewall riots, it more aptly applies to what went down at the press screening of the dishearteningly horrible historical fiction drama, Stonewall.

With his newest film’s release date of Sept. 25 looming ominously in the distance, German-born Roland Emmerich adds another disaster film to his repertoire. Unlike his previous productions like Independence Day and 2012, Stonewall boasts no apocalyptic premise or computer-generated explosions characteristic of the genre. However, what wins this film its description of “disaster” is the the unforgivable inaccuracies of Emmerich’s portrayal of the early gay rights movement and his needless mutilation of such a significant historical event.

Stonewall couldn’t be more whitewashed than if it was doused in Clorox Bleach and thrown into the laundry three times over. Hunky midwestern hero Danny (played by Jeremy Irvine) arrives in New York City after being booted out of his childhood home when word gets out that this all-American Adonis is gay. Disowned by his football coach father for allegedly seducing the school’s star quarterback, Danny seeks shelter in the big city where he plans to tough it out until the fall semester that promises all the cushy comfort of Columbia University. Upon his arrival, Danny meets a ragtag team of transvestites and transgender people led by the charismatic Ray (Jonny Beauchamp), who immediately takes the clueless boy under his wing(ed eyeliner) and makeup-clad influence. Opening much like the average Disney Channel Original Movie, Stonewall begins on a promising note.

While this band of vagabonds is multi-racial, the film’s most prominent characters are white. This particular casting mistake succeeds in brushing notable historically-accurate black and hispanic influence of the gay rights movement under the rug, all while demoting the non-white characters to flamboyant hype-men or undesirable lovers. For a film that supposedly focuses so intently on minority groups, Stonewall provides little representation of the lesbian or bisexual communities, among others.

The protagonist is as one-dimensional as his neat, starch-pressed T-shirt. He is nowhere near the dynamic Herculean hero we want him to be. Doing little for the film apart from standing there under flattering light while looking really good, Irvine’s character is oddly underdeveloped for a main character. Conversely, the sole performance deserving of praise is Beauchamp’s. As the only dynamic character in the story, Ray’s entertaining commentary and wit provide multiple moments of relief from an otherwise annoying storyline.

For a screenplay written and directed by two gay men (Emmerich teamed up with playwright Jon Robin Baitz), Stonewall seems to make a mockery of the gay community’s good fight by completely missing the mark on all accounts. Contorting the LGBTQ community into a caricature of itself, the overblown stereotype of the gay man is more than perceptible. Despite what the film may suggest, not every gay man knows which nail polish color suits him best or how to strut his stuff down invisible catwalks on city sidewalks (yes, a version of this was unfortunately written into the script). Danny’s overnight transformation from a timid guy to an overconfident jokester whose curiously increasing femininity suggests a contagious quality to homosexuality—the very myth Emmerich tried to dispel by including an abhorrent “What To Do When Approached By a Homosexual” public service video in an earlier scene.

The overdramatic acting is laughable, and the stock line-laden dialogue simply adds to the unintended hilarity that made critics cringe in their seats. Sappy lines like Danny’s rage-filled “I’M TOO MAD TO LOVE RIGHT NOW. I want to break things,” and “Of course I care about you, you’re my friend,” elicit exaggerated eye rolls and from all audience members in attendance. Everything is overdone. When the film’s cartoon-like villain Mr. Murphy— a shady club-owning criminal with a long record and secret ties to the Mafia—is finally arrested, he is put in a police vehicle and practically shakes an exasperated fist in Danny’s direction. (“And I could’ve gotten away with it, too, if it weren’t for you meddling kids!”)

The actual riot scene is poorly produced and drawn out too long. Still looking great in that tight white T-shirt, though, demigod Danny is the chosen one—the leader of the cause. Throwing the first brick that grants his misfit followers the unspoken permission to wreak havoc upon the police force, Danny then delivers the undisputed worst line in the entire film. Raising a fist to the sky, he screams repeatedly “Gay power!,” which sends viewers into an unintended eruption of laughter.

Stonewall is the perfect film for a moviegoer who craves the odd combination of an R-rated flick with reach-for-your-dreams and never-turn-your-back-on-your-true-friends life lessons, all with the added flourish of offensive stereotypes. At one moment in the film—about mid-way through the wildly chaotic riot—a protester turns calmly to his fellow confidant and says, “This is not good. This is going to get out of hand.” This warning comes tragically late not only for the characters in the film, but also for the audience of film critics who willingly volunteered to review Stonewall.