Home » Mogan Connects With Students Through Dinner With The Dean
News, Featured Story

Mogan Connects With Students Through Dinner With The Dean

Last week, Katie Lamirato, MCAS ’18, sat with several other students, Dean of Students Thomas Mogan, and his wife, on Mogan’s back patio for dinner. She and the other students met his family and talked about their personal lives over lasagna, Mogan’s favorite dinner, until the citronella candles could no longer keep the bugs away, and the group went inside.

After joining the Boston College community in January as the new dean of students, Mogan set out to better understand the BC community, in part by initiating the Dinner with the Dean program, which kicked off this fall.

At the dinner, Mogan began by introducing himself to the students so that they could get to know him a little better. He then invited the students to go around and introduce themselves and say what their highs and lows have been at BC. Mogan said he does this so all of the students have an opportunity to talk.

“I think that part of the reason why they may want to come is they may have something that they want to share with me and they have an insight that I would love to hear,” he said. “Or they may have a new perspective on BC that I haven’t heard yet.”

Usually, the conversation revolves around these highs and lows—many students have similar feelings and can offer each other some advice. Part of Mogan’s goal, he said, is to help the students get to know each other. He wanted to immerse himself in BC culture, he said, in order to learn as much as possible about students and their experiences.

“The students seem to be hungry for authentic conversation,” he said.

Mogan explained that his position would naturally bring him in close contact with several groups of students on campus, such as the Undergraduate Government and cultural organizations, but he wanted to expand that scope. He hopes students will come to his home for dinner to enjoy a relaxed conversation and good food.

“I also wanted to throw out an invitation to the general student body,” he said. “One, so that they could get to meet me, but then two, so that I could again meet them and learn as much as I could about their experiences here.”

Previously, Mogan and his wife worked at Villanova, where they taught some classes and would occasionally have groups of students over for dinner. But now, at BC, Mogan extends the offer to all students to come dressed casually and get to know Mogan and his family.

“One of my biggest goals here is to show that the Dean of Students Office has a human side to it,” he said. “So part of my motivation in holding these dinners is to really reach students on a one-on-one basis to let them know that we’re here to help and support them, and that I’m a person that they can come and talk to.”

Lamirato signed up for this first dinner because she appreciated that Mogan was reaching out to the students to get to know them better.

“Dean Mogan and his wife were so welcoming that I quickly fell into a sense of comfort and belonging,” she said. “Dean Mogan and Mrs. Mogan treated us as if we were their own children. It honestly felt like a home away from home.”

Emma Jordi, MCAS ’18, who also attended last week’s dinner, said she felt very comfortable and relaxed at Mogan’s home. Jordi is studying abroad from South Africa, and she was hoping to meet more American students when she signed up for the dinner.

Mogan said that he has enjoyed the dinners and hopes to continue them every semester. Some of the students have since followed up with Mogan, which he believes shows the dinners are achieving what he hoped they would: allowing members BC community to connect with one another. 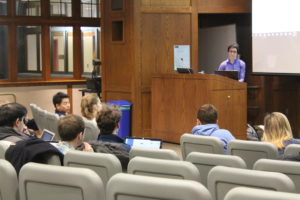 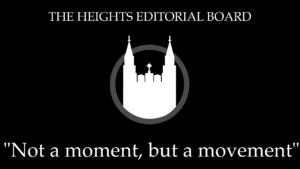