Home » Boston Calling: Alabama Shakes Is All Rhythm And Blues 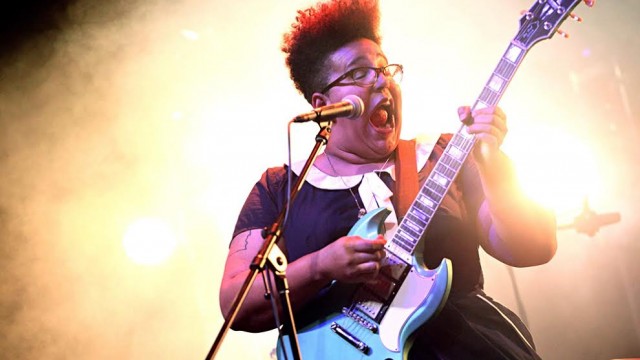 Boston Calling: Alabama Shakes Is All Rhythm And Blues

It was a sweltering 90 degrees at the dust-soaked festival grounds at the Woodlands in Dover, Del., when a woman, clad in a billowing blue dress, stepped up to the microphone. My mind was still on the Kendrick Lamar performance I had just seen (in a few short months, he would play a sold-out show at Madison Square Garden with Kanye West for good kid, M.A.A.d city, making it nearly impossible for me to see Kendrick up close again without selling an arm or a leg.) By then, fatigue had settled in on the festival-goers and I could think of little else besides getting water or finding some shade. The woman, all big black curly hair and sweat rivulets streaming down her forehead, leaned into the mic and starting singing, “Bless my heart, bless my soul…”

The voice that came from this woman opened up a portal to this otherworldly sound that seemed to transcend even Aretha or Joplin or Etta, a voice that would blow even Otis Redding away. It was the second day of the 2013 Firefly Music Festival and I had never been this transfixed by a frontwoman before. Later on that weekend, I would go on to see the Red Hot Chili Peppers, Tom Petty and the Heartbreakers, and Vampire Weekend. The year after that: Beck, the Arctic Monkeys, Outkast, Weezer, and the Foo Fighters. Nothing else could compare back to that moment sitting in the grass on that Saturday afternoon, listening to Brittany Howard belt “Hold On” into the mic.

Back then, 26-year-old Howard and Alabama Shakes were relative newcomers to the mainstream music scene. In 2012, the then-unsigned band had released their debut album, Boys & Girls to near universal acclaim. Alabama Shakes then embarked on a festival tour in 2013, with “Hold On,” the leading single off its album peaking at number one on the Billboard Adult Alternative Songs chart. Meanwhile, the band was playing gigs at the White House and on “Saturday Night Live.”

A large portion of Alabama Shakes’ critical and commercial success has been attributed to Howard and it isn’t hard to see why. She was two parts Janis Joplin, one part Aretha Franklin—a reputation that she would later come to reject. Howard’s vocal changes shifted seamlessly from her soulful croon to raw gritty screaming, all while backed by powerful guitars and a natural energy that permeated her stage presence. She was mesmerizing in a way that lead singers from 1960s rock performers were—Robert Plant of Led Zeppelin or David Bowie. It was these comparisons that earned Alabama Shakes the reputation as a “revivalist” band—something that Howard would also later reject.

In 2014, Alabama Shakes released its sophomore album, Of Sound and Color and may have finally shed its “revivalist band” image once and for all. Leading singles like “Don’t Wanna Fight” and “Future People” stand out as triumphant intersections of genre and sound, imbuing ’70s funk and bluesy soul with psychedelic guitar lines and powerful harmonies. It’s Howard at her best, drifting from falsetto vocals to her trademark raucous belt, and backed by a sound that was pure rock and roll, casting aside all Aretha comparisons in the process.

When Alabama Shakes capped off this year’s Boston Calling Festival on Sunday night, I found myself in a similar position, flanked by other festival-goers, and completely mesmerized once Howard took the stage. She looked a little different from when I had seen her last in 2013— her wild mess of curls had been cropped short, but her gritty contralto still enveloped the crowd at City Hall Plaza in her classic soul-shouting delivery. Without even realizing it, I caught myself mouthing along as she began singing the lines of the next song, “You got to hold on … Hey, you got to hold on …”