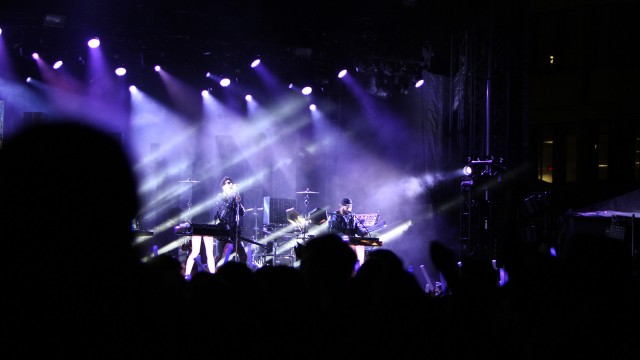 With the supermoon looming overhead on a crisp autumn night, hundreds of glow sticks bobbed across the crowd as lead singer and guitarist Joe Newman led his band into a synth-laden, drum-heavy rendition of “Tessellate,” a single off alt-J’s first album. This was the second night of the Boston Calling Music Festival.

Bookending festival season, Boston Calling serves as the last big party of the summer every year at City Hall Plaza. Day two of the festival treated the ever-expansive crowd to one of the lineup’s most anticipated acts—English indie rock band, alt-J, as it played popular songs from its 2014 sophomore album, This Is All Yours. In a departure from Friday night’s main headliners, day two acts infused electronica music with folk rock stylings, transforming the otherwise immobilized crowd into a makeshift dance party.

Saturday featured alt-J’s infectious, electronica imbued high-energy indie rock. The Leeds-formed band began with songs from its newest album, from the torridly slow guitar riffs in “Every Other Freckle” to the downright bluesy “Left Hand Free” before drifting into fan favorites from their first album, An Awesome Wave. Following the humming bass synths of “Fitzpleasure” and the upbeat guitar twangs in “Dissolve Me,” the band finished off its set with a popular leading single off its first album, launching into a flurry of ethereal, breathy synths in “Breezeblocks.”

Geared toward a younger demographic this time around, Saturday’s star-studded lineup included the likes of Father John Misty, CHVRCHES, Chromeo, Walk the Moon, Sturgill Simpson, Grey Season, Skylar Spence, Doomtree, and Stephen Malkmus and The Jicks. With folk rock singer Father John Misty launching into the title track of his lauded I Love You Honeybear, the folk rock stylings of the afternoon gave way to a nighttime light show. Walk the Moon, the pop rock band from Ohio, blew up the radio waves this summer with “Shut Up And Dance.” The crowd at City Hall Plaza did just that as Walk the Moon launched into the poppy guitar riffs and sing-a-long chorus off its most popular single.

Canadian-based electro funk duo, Chromeo then warmed up the crowd with rock-inspired dance singles like “Jealous (I Ain’t With It)” and “Over Your Shoulder” off its album, White Woman. Following its set, the Glasgow trio, CHVRCHES rolled out tracks like “Tether,” “Gun,” and “We Sink” from their 2013 debut album, Bones Of What You Believe. Despite some audio difficulties, the synthpop group finished off strong with its leading single, “The Mother We Share.”

Misterwives, Twin Shadow, Hozier, and Alabama Shakes are slated to cap off this year’s festival on Sunday.

boston calling alt-j Father John Misty walk the moon boston calling 2015
How We Like Them Apples: Beantown On The Silver Screen
With Recent National Data, A Renewed Conversation On Assault At BC