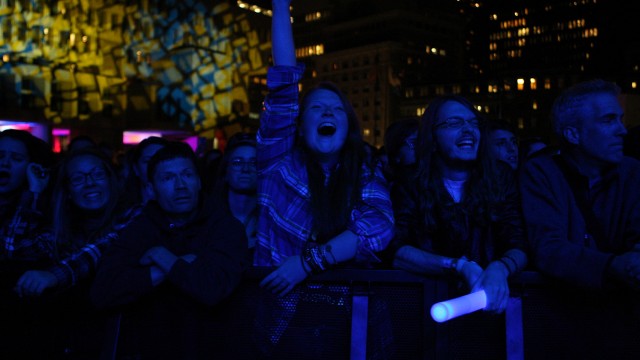 Seth Avett leaned into his microphone, sweat streaming down his face and through his mustache, and said “Scott Avett, everyone.” Seth’s older brother Scott slid to the center of the stage as the rest of the band headed off in the typical mid-set break/solo performance. The gloriously bearded Scott, sporting a trucker hat and acoustic guitar, struck a few winding chords and sung “If I get murdered in the city / Don’t go revengin’ in my name.”

“Murder in the City,” a song that consisted mostly of Scott’s timbered voice and guitar ringing through the commons, really shouldn’t have engaged that many people. It was an ironically fitting song to sing in the heart of a city. The song—the Avett Brothers’ whole set, really—was about the ways and means of the heart, love and death. The Avett Brothers, the most popular folk-rock group outside of Mumford and Sons, can get away with what sometimes comes off as sappy because of the band’s undeniable, richly textured sincerity.

The Avett Brothers played for a little over an hour and a half, a set brimming with classics like “Head Full of Doubt / Morning Full of Promise” and the more recent “Morning Song.” But some of their songs came alive in Boston Common in ways many probably didn’t expect. “Down with the Shine” got the crowd humming and singing along as much as any of the others. “The Once and Future Carpenter” was a mid-set highlight, as happy folks bobbed and bounced and pretended their expensive Sam Adams were in a mason jar. Near the end, “Vanity,” from their most recent record Magpie and the Dandelion, gave the band a chance to jam and bounce around the stage. Through the set, Seth swapped between acoustic and electric guitar, and Scott rotated from banjo, piano, and acoustic guitar.

Where the set from the folk-poets was warm and sincere, the preceding set from Of Monsters and Men felt cold and distant. Yet it was still, in its own way, beautiful and engaging.

It was the Icelandic band’s second go-round at Boston Calling, and they kicked off the set with a couple cuts from their most recent record from over the summer—Beneath the Skin. They went for a black and white visual aesthetic as their chaotic new material tore its way through the festival square. Eventually, the band made its way back to the hits from their breakthrough debut album My Head Is an Animal. The crowd surfed and sung along to “Little Talks,” “King and Lionheart,” and “Dirty Paws.” It’s not that the earlier work of Of Monsters and Men is that much better, but the band seemed to enjoy playing it much more. And the audience seemed to feel that, too. The band’s older material is distant—singing about mystical nature—but still engaging. Their sound at times felt like it was cascading—as it does in “Dirty Talks”—and other times rose in tides—as it does in “Little Talks.” Their music sort of engages in pastoral melancholy, orchestral tides with a sprinkling of acoustic guitar.

Gregory Alan Isakov had kicked off the festivities. He has a few of those acoustic songs that everyone seems to have heard and can hum and pretend to strum along to. “Big Black Car” and “The Stable Song” are bound to be featured on any ‘Acoustic’ playlists. The songs had a raw quality live, and that’s really the way they’re meant to be heard.

Scott Avett had finished “Murder in the City” to wide, rousing applause. The rest of the band joined him back on stage. The Avett Brothers—the festival’s headliners—were a safe choice. No one’s going to be offended by two brothers from North Carolina singing about love, death, and family. The rhythm of the festival for the past few years has been: give the kids someone to listen to in the late afternoon and let the adults come out at night. Acts like Tove Lo and The 1975 have ruled the late afternoon, and acts like Nas and Beck have delighted and stirred mostly middle aged guys at night. And while the Avett Brothers aren’t what “the kids” are dancing to, it’s what a lot of them are jamming to. But The Avett Brothers are also a band your dad might like. It’s not necessarily out with the old and in with the new. It’s a meeting of both.