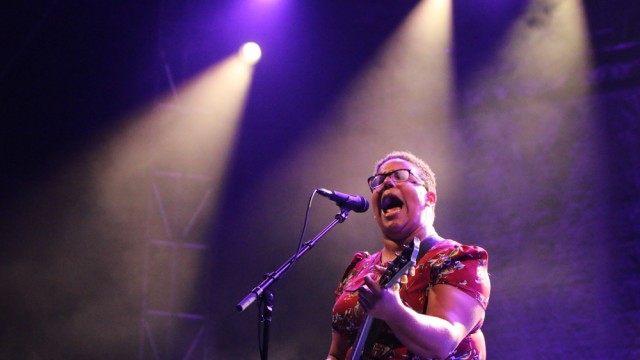 Look out, Chicago— here comes a new, cooler city that seems to know its tofu from its turkey burgers and its cortados from its cold brews. The land of Lollapalooza and renown rock groups found a ready rival this weekend by Beantown, which drew throngs of young music lovers straight to City Hall Plaza with a lineup of indie-infused and rock-saturated setlists. On Sunday, Boston might as well have been dubbed the “Indie City.”

Forming an all-star lineup of high-energy performers whose styles straddle several genres but hold indie at their core, the artists drew large crowds throughout the day. Composed predominantly of hipster-esque 20-somethings who swayed along to Daughter’s drawn-out vocals and bopped their heads to Ben Howard’s lively instrumentals, the audience enjoyed an afternoon soundtrack split somewhat evenly between hard rock and atmospheric alternative. Contrasted with this year’s spring installment of the outdoor music festival that brought in a more mature crowd, Boston Calling’s September shows catered to a new wave of college-aged kids.

The early afternoon was dominated by free-spirited singers and loud dance tracks from the likes of British band Daughter and Bay State-born Dirty Bangs. This made-in-Massachusetts group started the final day with a bang by introducing its audience to the energetic atmosphere it was to expect from the subsequent performances. Having concocted a signature sound influenced by everything from alt-pop to doo-wop to rock n’ roll, the Dirty Bangs seem to be perfect for producing “songs for the spirited, songs for the misunderstood romantics, [and songs] for the drunks and the saints.” The openers treated the concert’s early-arrivals to percussion-heavy hits like “I’m in Love With the Summertime” and their passionate track “Pleasures.”

Following Brooklyn-bred Twin Shadow and his triumphant lyrics intertwined with infectious night club background beats, Misterwives marked a high point of the afternoon, pumping indie-pop into the plaza with their single “Reflections” and an inventive cover of The Weeknd’s “Can’t Feel My Face.”

After the Misterwives, Nate Ruess brought fans back in time with throwback tracks straight from fun.’s 2011 glory days. Despite performing at this weekend’s venue as a solo musician, the Iowa native prepared a selection of songs from his heyday as the lead singer in fun., as well as a few covers of classic rock hits. Ruess showed off his high notes and emphatic fist pumps, all while inviting the audience to sing along to “Some Nights,” “We Are Young,” and Elton John’s “Rocket Man,” among other chart-topping hits of the past.

As soon as the sun went down, Ben Howard graced the JetBlue Stage with his yearning lyrics yelled against a backdrop of indie-folk beats. Howard’s heart-pumping prepared the young concertgoers for Hozier’s highly-anticipated appearance.

Irish singing sensation Hozier won the night with his soulful ballads and atmospheric echoes. His wide vocal range reverberated around the venue, commanding the crowd’s undivided attention. “Take Me to Church,” “From Eden,” and the lullaby “Like Real People Do” made the list, among other favorites from the Irishman’s self-titled studio album Hozier. Adding an unexpected indie-rock rendition of Ariana Grande’s pop hit “Problem” to his repertoire, Hozier’s high-powered performance was the perfect precursor to the night’s headliner.

To cap off Boston Calling came Alabama Shakes and all of its bluesy-rock bravado. Owing much of its power to the compelling voice of frontwoman Brittany Howard, the American rock group brought its supercharged sound with a slight southern charm to City Hall’s JetBlue stage. Present in all of the band’s fan favorites like “Hang Loose,” “Dunes,” and “Over My Head,” the Shakes’ harsh motown-rock style shook an otherwise homogeneous group of Indie artists.

Set coincidentally at the same time as the super blood moon eclipse, Boston Calling’s final night ended the festival on a powerful note thanks to a lineup made mostly for the Millennials.

boston calling misterwives alabama shakes boston calling 2015
Drake and Future Trade Swings on ‘What a Time to Be Alive’
‘What Is Your Favorite Song To Listen To When It Rains?’