If there has ever been a time to get into “synthpop” or “inditronica,” it’s now. Released this past Friday, CHVRCHES’ new album, Every Open Eye, brings the Scottish electro-pop band to a whole new level. Without abandoning its signature synthesizer, the band has found a way to enhance Lauren Mayberry’s dulcet vocals and has elevated the band’s sound to soaring heights.

“Leave a Trace”—a single that was released a few days before the album—sets the tone for an unapologetic, unforgiving, and unforgettable album. With lyrics like “You think I’ll apologize for things I left behind / But you got it wrong / and I’m as sane as I ever was / You talk far too much  / For someone so unkind,” the song gives the album an edge. The brilliant synth created by Mayberry, Iain Cook, and Martin Doherty gives the songs a beat and rhythm you’ll want to groove to, but Mayberry’s melodic voice and emotional lyrics often call for more than just dance. Mayberry is dropping pearls of reflection through the entire album.

In CHVRCHES’ debut studio album The Bones of What You Believe, they focused on (and succeeded in) showcasing their talents with intriguing lyrics and a display of synth mastery. It’s clear they’ve come a long way since working together in a small basement studio in Glasgow, both musically and personally. While the first album was for the public, it’s clear Every Open Eye–though still for the audience’s enjoyment–comes from a much more personal place, almost as if the band needed to get the words and music out for their own benefit.

The band’s second studio album is all about emotional release and healing, about reaching a better place, and about letting go of toxic personalities. Much of the inspiration for the tracks on this album come from Mayberry’s personal relationships and experiences, using the music as an outlet for all the things she regrets saying and the things she couldn’t say. But the album also showcases Martin Doherty’s raspy pipes in a surprise takeover of lead vocals in “Follow You,” contrasting nicely with Mayberry’s lilting harmonies.

The album presents harsh emotions like anger, sorrow, and grudges in a sweet and appealing way that will lure and confuse and please the listener all at the same time. But don’t be fooled, they do not lose their optimism either—with upbeat gems like “Make Them Gold” and “Clearest Blue” (another single released a few days before the album), it’s clear that the album is all about renewal, and having let all the negative emotions go, they can focus on a brighter future.

The band manages to keep the poetic lyricism many other synth bands let fall away when they lend all their focus to the sound and forget about the meaning behind the words—with thought-provoking lyrics full of paradoxes, metaphors and allusions, CHVRCHES at times touches pure lyrical genius. And the perfect balance between the synth and the vocals is not just intriguing, but striking to listen to. The duality it displays is echoed in the descriptions of the band, as it has been known to give a modern aspect to songs described as reminiscent of ’80s synth pop. Drawing its influences from acts like Madonna, Depeche Mode, Prince, Eurythmics, Throbbing Gristle, and more, it’s no surprise that this band’s sound is so unique when they draw from such an eclectic mix.

The band manages to weave a story of heartbreak, break-ups, breaking down, and getting back up in 11 songs. It’s a cathartic, relatable experience. It’s a breakthrough creatively for the Scottish band, and one that will probably result in a commercial one as well.

album review chvrches
Caught In A Pinch? There’s An App For That
Why Amy Schumer Is Not Your Feminist Icon 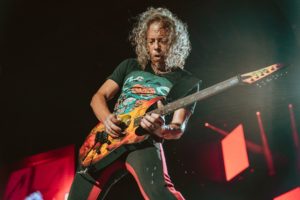