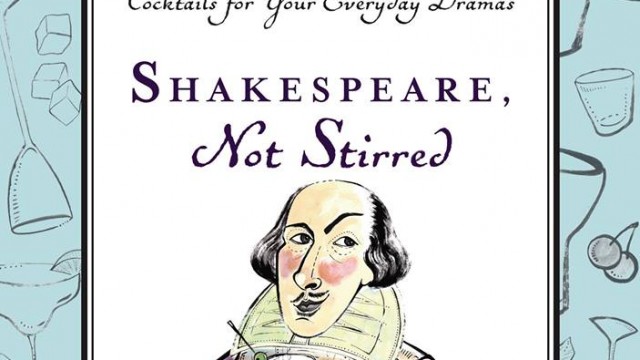 Cocktails, Mixed With A Literary Twist

Published in the United States by Perigee Books—a division of Penguin—and in the United Kingdom by Scribe, the book compiles cocktail and hors d’ouvre recipes inspired by Shakespeare characters. Similar to Tequila Mockingbird, the work strives to bring Shakespeare to readers’ daily lives through humorous recipes, puns, and images.

Bicks, a graduate of Harvard University who earned her Ph.D. from Stanford University, specializes in gender studies as well as the history of science. She has spent the bulk of her 13 years at BC teaching courses on Shakespeare, as well as classes on gender theory, including masculinity studies and the history of feminist thought. Her diverse skillsets and interests proved to be the catalyst for Shakespeare, Not Stirred.

“I also have a background in improvisational comedy and have written humorous creative nonfiction pieces over the years,” she said. “I started a blog about six years ago with my good friend Michelle Ephraim … the blog, Everyday Shakespeare, was a place for us to have fun with the characters and plotlines we talked and wrote about all day in our academic lives.”

Bicks’ and Ephraim’s joint blog served as a forum for their creative humor and their professional interests. It eventually led them to think about a larger commercial venture.

“We had features like ‘Ask the Experts,’ where we’d ask Lady Macbeth, Gertrude, and Cleopatra to debate different parenting styles, for example,” she said. “It was a lot of fun for us, so we decided to create something in the spirit of the blog that we could market as a commercial book. Shakespeare, Not Stirred came to me as a title first. I knew we had to write it, and luckily Michelle was game to do it.”

While both authors went into the project with expertise in the Shakespearean field, their personal and professional obligations proved challenging enough to stretch the project out over three years.

During the writing and editing stages of Shakespeare, Not Stirred, Bicks and Ephraim worked as much as they could each day amid their busy personal and professional schedules. On a given day, Bicks would write late into the evening after spending the day dropping her children off at school before teaching courses at BC and fulfilling her other research obligations.

“One of us would take a pass at something and then the other would work on it, and then we’d brainstorm together to get it just right,” she said. “As academics in the humanities, we usually write by ourselves, so this was a very refreshing and exciting way to write. Of course, Shakespeare collaborated all the time, so we also felt very authentic as we did it.”

Bicks admits that compared to her other work—her first book was about midwives in 16th- and 17th-century English medical and literary texts, and a book she is currently writing focuses on the minds of adolescent girls in Shakespeare’s time—Shakespeare, Not Stirred provided more laughs and a far different process as far as perfecting all aspects of the work.

“We spent a lot of time inventing puns like ‘Maki-Beth Rolls’ and ‘Kate’s Shrew-Driver.’ And, of course, we had to have a lot of tasting parties as we developed the drink and hors d’oeuvre recipes,” she said.

To develop the images used throughout the book, Bicks and Ephraim worked with the Folger Shakespeare Library in Washington, D.C. Working exclusively with the library’s collection, they found images to accompany drink and hors d’ouvre recipes that they then used in conjunction with Photoshop to show characters holding drinks and snacks.

Bicks emphasized the Folger’s support throughout the process of completing the book, and noted that the library hosted a party in honor of the book this past weekend in Washington, D.C.

The book’s chapters are divided into different life issues and themes, including “Shall I Compari to a Summer’s Day?: Romantic Occasions,” as well as “Get Thee to a Winery: Girls’ Night Out.” From here, drinks within each chapter focus on specific Shakespearian characters.

“We key the drinks in each chapter to specific characters whom we think embody an aspect of that theme. Richard III, for example, is in our ‘Dysfunctional Family Gatherings’ chapter. We talk about him as an angry middle child and create a ‘Gimme-let’ for him as a nod to his jealous power grab,” she said.

While the book’s more humorous side is its puns, drink recipes, and artwork, Bicks notes that at its core, Shakespeare, Not Stirred has a definite agenda to bring the playwright and his characters into the forefront of modern readers’ attention.

“At its heart, this is a book about Shakespeare, not a book about drinking. It’s part of our larger mission to bring the Bard out of the Ivory Tower and into the stuff of people’s everyday lives,” she said. “We quote a lot from the plays throughout the book to make his beautiful language more accessible.”

Part of this effort, Bicks continued, is inspired by her classroom experiences over the years with students that are intimidated by Shakespeare.

“[Shakespeare] wrote, produced and performed for everyone. Part of what makes him so enduring is his ability to get inside the heads and hearts of people who were not at all like him: women, people of other countries, religions, classes, races,” she said. “And he knew how to play with the poetics of language and to create lines that would stick with his audiences. He’s endlessly adaptable for these reasons.”

Bicks and Ephraim wanted to make sure interested readers could still learn significant details about the specific historical contexts in which Shakespeare wrote.

That is why, Bicks said, that they included “mini-Bards” in the book, or short bits of information and commentary for readers if they have further interests in the plays, historical issues, or themes being discussed.

Although the book was written nearly half a millennium after Shakespeare’s last works by two English professors collaborating on a Google Doc, Shakespeare, Not Stirred has found a home on the shelves of The Globe Theatre Bookstore in London, as well as the Shakespeare Birthplace Trust in Stratford-on-Avon. Being sold in these locations gives Bicks a tremendous amount of pride in her work.

“I love that our little book is sitting there so close to where Shakespeare lived and performed.”