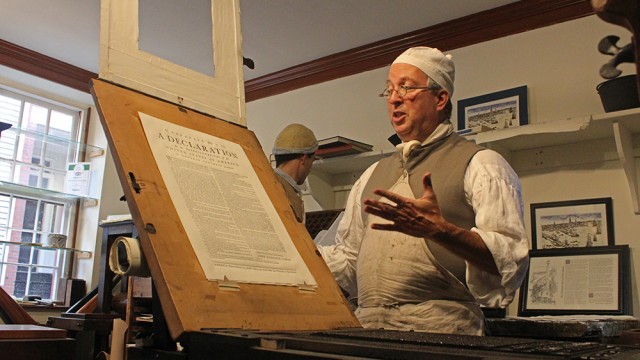 Upon entering the Clough House, visitors say they feel as though they have stepped into the past—back to an era where America was just beginning to take birth. Along the Freedom Trail, tucked away in a little room just around the corner from the Old North Church, is The Printing Office of Edes and Gill, a recreation of the historic colonial print shop that produced famous documents such as the Declaration of Independence.

As visitors step inside, they are greeted at the door by a man dressed in colonial attire—complete with cravat, Monmouth cap, and stockings—whose appearance calls to mind images of America’s founding fathers. This patriot is historian and master printer Gary Gregory, whose passion for American revolutionary history and printing led him to open the colonial printing office in the North End.

The shop, an educational enterprise meant to recreate and demonstrate the workings of colonial-era printing, was Gregory’s brainchild. Before deciding to open the shop, Gregory worked in sales management for Emerson, a $25 billion dollar corporation.

It started when Gregory became interested in the Boston Gazette, a weekly newspaper printed by Edes and Gill in Boston between 1755 and 1775 that was instrumental in egging on the Revolution.

“I started reading the political essays in the Boston Gazette, and was captivated by how powerful and moving they are,” Gregory said of the essays written under pseudonyms by revolutionary figures such as Samuel Adams. “Then I wondered, ‘Who are these printers, Edes and Gill?’” Spurred by this curiosity, Gregory developed his passion for printing.

In 2003, Gregory founded a nonprofit organization called Lessons on Liberty, which offers Freedom Trail tours that Gregory has been leading for eight years. The print shop, which opened in 2010, is a collaboration between Lessons on Liberty and the Old North Foundation, which owns the space and manages the retail aspect.

It took Gregory five years of preparation to buy all the equipment and learn how to use it properly. He considered six locations to open his shop, but the empty room at the Old North Church was his favorite by far.

The first thing Gregory had to do was find a press, or else he had to build one. He looked to professors at a university in Tennessee who were building one, and they referred him to a man in Williamsburg who, fortuitously, had a spare printing press.

Gregory began using this 1949 reproduction of an English common press for his demonstrations, particularly to print the Declaration of Independence, which he sells at the shop. The shop prints about 30 declarations a day, although the original Edes and Gill only ever printed about 200 copies total, Gregory said.

Though Gregory strictly prints the Boston version of the Declaration, he explained that the document was printed in different formats by 14fourteen colonial cities, with Philadelphia’s being the first version printed and Baltimore’s the last. Notably, Gregory said, the Baltimore Declaration was printed by a woman—Mary Goddard—who owned her own press.

“The Declaration came up the coast by horseback from Philadelphia to all the colonies,” Gregory said.

Since no local government would have paid to print it for all the colonies, and as there was no federal government, each colony had to print its own Declaration. Boston received the Philadelphia-printed Declaration as an official document to format its own version, which was then printed by Edes and Gilles—a document that Gregory has accurately recreated at his shop.

In order to create such documents, Gregory had to learn how to set type, composing the documents letter by letter. He has memorized the location of each metal letter in the case, since the letters are too small to look at individually each time. Every piece of type has a nick on it, which Gregory feels for when he puts his hand in the box so that he can orient it the proper way, placing it upside down and backwards on the plate to form the printing template.

“It’s hard for people from the digital age to wrap their heads around it, but printing was a totally manual process,” Gregory said. “In 1900 in this country, more people were employed in the print industry than any other industry, newspapers are everywhere, and people are running these machines and setting type. It’s just this phenomenally big industry that virtually disappears overnight in the 1970s with the dawn of digital printing.”

At the shop, Gregory now has three presses, but actively prints only from one. One of these presses is an original 1740 copper plate rolling press from Paris, one of four in the world, which Gregory bought from a printmaking museum that had gone out of business He got a grant from the Society of Cincinnati to create a replica of that press, the only replica in the country, which is the third press Gregory keeps in the store. Paul Revere used a similar machine to make his prints, which would later be painted by watercolor artists. Due to the complicated process, only about three prints could be produced per hour.

Besides the declaration, Gregory said that his shop prints all types of documents, all originally produced in Boston during the revolutionary period.

“I’m getting ready to do the 1787 Constitution,” Gregory said. “It’s a two page document, and it’s pretty awesome.”

Colonial American printing, especially at its beginnings, was extremely limited and elementary compared to the printing industry in England. Despite this fact, said Gregory, the implications of printing and the importance the printed word played in these times was exceptional.

“It’s amazing to think that these printing presses allowed the revolution to spread in the colonies,” Gregory said. “Printing is what made the revolution possible.”

Just across the hall is the conjoined chocolate shop, where interpreters in colonial dress—some of whom also work in the printing shop—demonstrate the way 18th century Americans prepared and consumed chocolate. After the demonstration, observers are offered a free sample of the rich chocolate drink enjoyed by Boston’s Revolutionary-era patriots.

First, cocoa seeds are grounded into a powder, which is then placed on a slab of hot stone and rolled, melting into a rich, buttery texture. Since the cocoa seeds were bitter and sugar was expensive, spices like cinnamon, chili pepper, and cardamom are added to the chocolate. The melted chocolate is then placed in a container and left to harden. The solidified “cake” of chocolate is then wrapped in paper and sold. Colonial households who could afford to grind these cakes up and mix the chocolate powder with hot water, producing a delicious beverage.

At that time, chocolate was rather expensive and was usually consumed by upper-class households. Sugar, too, was very expensive, so it was not included in the chocolate but rather added later at the consumer’s discretion. For this reason, the chocolate drink is rather bitter.

By displaying two sides of the nation’s rich cultural history, Edes and Gill hopes to highlight its unique and eccentric niche in the North End. 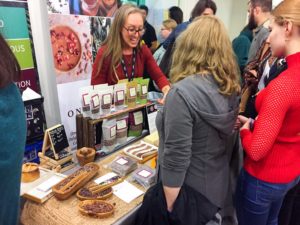 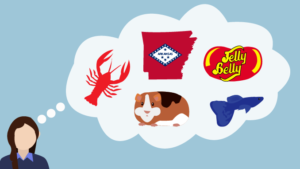