Home » Beers And Bacon Jam: A Visit To Newton’s Only Commercial Brewery 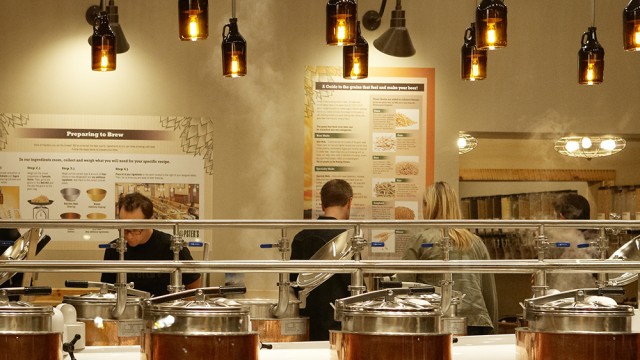 Beers And Bacon Jam: A Visit To Newton’s Only Commercial Brewery

Something caught my eye outside the passenger’s seat window. It was a little jarring to see something so lit up and full of energy between the residential streets of Newton and the exit to the Pike.

“What do you think that place is?” a friend asked from somewhere in the back of the car. “Some kind of bar?”

A big, minimalist logo hung outside. We could see the warm wood, large communal tables, and exposed-bulb BREW sign from the car. It was full of people. It would make a great Instagram.

“Do you think we’re cool enough to go there?” someone else asked. “It seems like a hipster beer place.”

A few weeks later, I was thumbing through filters on my phone, deciding if I was a huge poser Instagramming a brewery when my followers know very well I’m much more of a wine girl. I was still a little apprehensive of brewing my own beer, but it seemed like the perfect adventure for 11 college seniors who were relishing the last few days of summer with few responsibilities and no work to do.

Hopsters is a so-called “community brewery,” a licensed brew pub in Newton, Mass. where visitors can have the hands-on experience of crafting their own beer, learn about craft brewing, and enjoy some local brews. Owner Lee Cooper says the goal is “to create an increased awareness about craft beer.”

“And have fun,” he added, as an afterthought.

It was fun. Don’t think you’re cool enough for it? Wrong, you definitely are.

We were greeted by a generic hostess in black who explained the process and left us with a laminated cookbook of sorts to choose what kind of beer our group of 11 liked enough to take home two and a half cases. We were then handed off to our sweet brewer who was the furthest thing from intimidating. He is obviously a craft beer enthusiast who seemed to get even more excited when we said that none of us were home-brewers, as if he was privileged to be the one who peeled back the veil on the world of beer for us.

Under his guidance, we measured, we smelled, we weighed, we actually learned what a hop is, we tasted, we boiled, we stirred, we laughed at the silly pictures of us over the kettle. Our hands were held throughout the entire process, but it was sneakily educational. Not in an annoying field-trip way either, but more in the way that when someone is really excited about something; you get excited, too. Our brewer answered all of our annoying questions and, despite my doubts in our brewing skills, was enthusiastic about our opinions on the recipe. At Hopsters, the beer you make is really your own. My group chose not only the type of beer we wanted, but smelled and picked the hops and a few other ingredients.

A quilt-like display hung next two us, boasting some of the best customer-designed labels (things like “Spank: Pale Ass Ale” or inside jokes celebrating bachelor parties and retirement). We took dorky Snapchats and debated what our label would look like. Our brewer made sure he went slow enough so that we could get good pictures.

Hopsters has this rhythm to it that seems so obvious, I asked Cooper if anyone else was doing it. Not only does it capitalize on popular trends like personalization, farm-to-table sourcing, and Pinterest-worthy aesthetics, but after you do all the mixing and measuring, each group’s kettle needs about 45 minutes to boil. In the downtime, groups can try the local beers on tap and eat.

The food is good beer food: Hot, soft pretzels with beer mustard and bacon jam. Flatbreads. Buffalo chicken dip. Huge boards of local handmade charcuterie from Moody’s in Waltham, Mass. The large tables encourage family-style eating. My friends and I partook in family-style drinking, passing around each of our different beers to be sampled.

The interior is small, all the groups are very aware of one another as the brewers run between the various groups in the various stages of production. The rowdiness of the groups in various states of buzz feed one another. Cheesy toasts to brewing or good friends are heard every few minutes. Every person in there seemed dorkily enthusiastic or at least very happy to be there. I had caught the wave as it was cresting, a success story unfolding as I participated in it.

Something about all of this felt predictable. Not bad predictable, just a nagging sense along the lines of, “Of course this is a thing. Why hasn’t this happened before.” The place felt familiar and welcoming. The concept seemed bulletproof, playing into so many trends at once;—an outing that had a built in activity involving beer and built in time for customizing, learning, talking and, eating. It was obvious, simple, and just really cool in that magical way that things that are often perfectly simple are really fun.