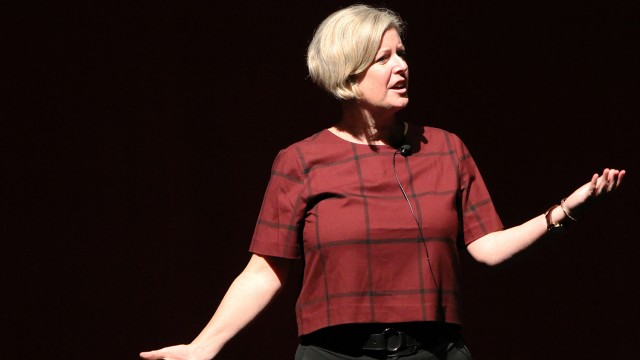 All 567 newly upholstered seats in Robsham Theater are filled with students chattering with friends and classmates. As the lights dim down, the last students to get a star-covered paper wristband find their seats. The rumble of clapping and cheering shakes the floor as Kerry Cronin, part professor, part BC celebrity, takes the stage.

In celebration of Espresso Your Faith Week, the Church in the 21st Century Center hosted an Agape Latte “Beanpot” on Tuesday night featuring campus band Juice and Cronin, a philosophy professor at Boston College who now travels around the country, talking to students about dating.

Espresso Your Faith Week is all about sharing stories, said Karen Kiefer, the associate director of C21, noting how students and faculty alike can participate in the week. It is a week, she said, of awakening to opportunity, to faith, and to spirituality.

The Espresso Your Faith Week began in the spring of 2013. After the program’s first year, the students decided to move the week to the early fall so that BC students could find out about C21 and Campus Ministry offerings earlier.

She said the members of Agape Latte are the ones who put the whole week together—their ideas and creativity are essential to the formation of Espresso Your Faith week.

“No matter where you are in your spiritual life, Agape Latte meets you where you’re at,” said John Walsh, CSOM ’17, an organizer for the event. “It helps you to recognize the presence of God’s agapic love in your own life, and inspires you to make it a deeper reality in the lives of others.”

At Tuesday’s event, Cronin explained that she never tells her own stories during her talks, but rather shares what she’s learned from conversations with students.

Cronin began her talk by joking about all the various and embarrassing promos that the Agape Latte has had her do over the years—everything from talking to a coffee bean to posing with a latte mustache.

She raised some interesting questions—what if when you liked someone, they liked you back? What if when you didn’t like that person anymore, they also no longer liked you? And what if there was a human catalogue that you could flip through when you were bored to judge other people and get only positive feedback about yourself?

Well, she said, there is such an app—Tinder. Cronin believes that people use Tinder because they want a shortcut to the end of a love story.

But, she said, the most beautiful stories she has heard from students—stories of heartache, of love, of pain—have all been long.
Of those students at BC with love stories, she said, they are often not novels, but more like novellas or poems or haikus.

She also shared that the students often have many different ways of approaching their stories—some students come in and tell their entire life story and then slip in the real story in the last two minutes of their time, while others talk about problems that friends or family members face to avoid talking about their own problems.

Cronin discussed her dating assignment and how students are always surprised by the outcome—some realize that their crush is not as great as he or she thought, while others wonder if they will go on a second date. She said that no matter the story, Cronin hopes that we can all make sense of our own love stories.

Cronin said that we, too, have all that we need within ourselves to date—we do not need an sheet for guidelines on how to date.
She offered some advice when it comes to dating—be courageous, do some internal reflection, and never give up. Most college kids, she believes, are afraid to reach the end of a love story.

“Seek more than what the app can give you,” she said.

Cronin explained that having strong and deep relationships is what God calls us to do.

“That is what it means to be made in the image and likeness of God—to be in relationship where the love and the beloved are loving each other in a way in which the love is just pouring out,” she said.

Cronin aims to include multiple pieces in her talks so that every student can take away something. She wanted to illuminate the importance and power of stories of love and heartache. But, she said, she is never quite sure what students will get out of her speeches.

She also strives to include humor into her talks because humor, she believes, breaks down walls, which then allows her to go delve into deeper ideas.

Cronin said she enjoys being part of Espresso Your Faith week because she has the opportunity to be connected to students and their creativity.

“Students know what students want to talk about,” she said. 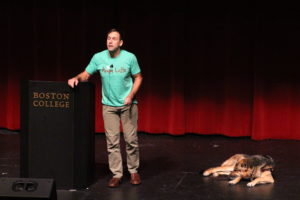