Home » Developing A Campus Voice To Defend ‘Our Common Home’ 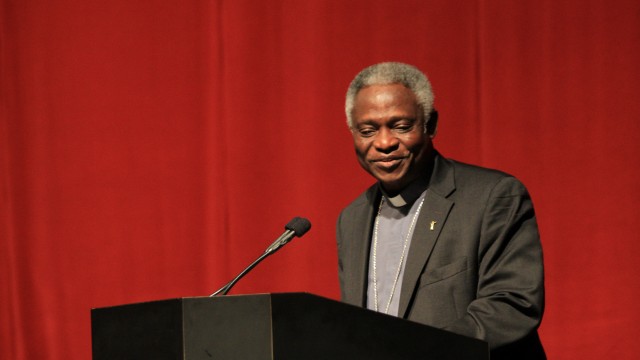 Developing A Campus Voice To Defend ‘Our Common Home’

This week, the University hosted Our Common Home, a conference meant to address Pope Francis’ recent encyclical regarding climate change. In the encyclical, Pope Francis urges the world to treat the earth with respect and work to reverse environmental damage. The University  brought several prominent speakers, including Massachusetts Senator Ed Markey and Ghanaian Cardinal Peter Turkson to campus to discuss the problems of climate change in our nation and globally, as well as the importance of the encyclical itself.

New residential buildings on campus have been outfitted with green technology, and old administrative buildings are updated so that they are more energy efficient, all of which are efforts by the University to create a more sustainable campus. Focusing on infrastructural advancements, the administration has been hesitant to take a more formal stance on the adverse effects of climate change. Last year, for example, when a group of students called for Boston College’s divestment in fossil fuels, the University said the school’s endowment would not be used as a political wedge. This understated approach—and lack of strong administrative stances—on major issues like climate change has caused several groups to characterize the University as uncaring or too risk-adverse to stand up to injustice.

But, Our Common House represents a distinct change in thinking, even if the conference was not focused on the divisive issue of divestment. This week-long event was an attempt by faculty to involve the students in these important issues, and for that they should be commended.

Moving forward, BC ought to continue in this vein, allowing University spaces to freely serve as a forum for major issues affecting both the country and the Church. Such an involved conference cannot be staged every week, but continuing to hold speakers and events that engage students and address controversial problems like climate change help. The University has been hesitant to take a stance on several social problems which clearly should be the concern of a Catholic institution, like mass incarceration, police violence, and the death penalty. BC should not be afraid to actively address injustices and stand with students on major issues of national and global importance, that affect us and our common home.