Home » Students Convene To Discuss Experiences With BC Drinking Culture 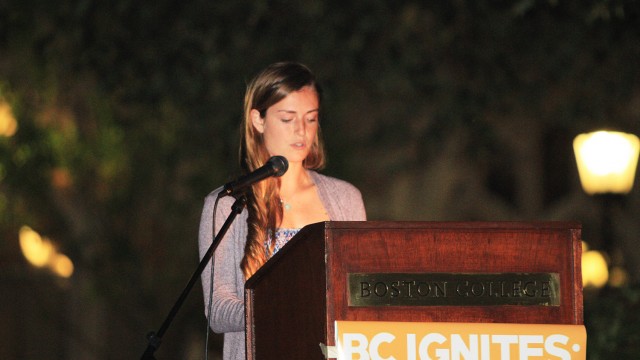 Students Convene To Discuss Experiences With BC Drinking Culture

Three upperclassmen discussed their experiences with the University drinking culture, with speeches ranging from the effects of drinking on a family to the societal pressures around alcohol. As the sun set Monday night, a small group gathered in O’Neill Plaza for the first BC Ignites event of the year. A group of about 30 students grabbed cookies and hot chocolate, and spread out on the lawn to listen to other students discuss their experiences with the Boston College drinking culture.

BC Ignites is a continuing student speaker series, put on by the Undergraduate Government of Boston College, that attempts to spur dialogue about issues regarding student life at the University. In the past, BC Ignites topics have included race, socioeconomic status, and mental health.

The talk began with a short speech by Robyn Priest, the associate director of the Alcohol and Drug Education Program in the Office of Health Promotion. She began by acknowledging that BC does have a culture of drinking, but questioned whether that was a good thing. She noted that drinking on college campuses is a big problem throughout the nation, and that as a Division-I residential school in the Northeast, BC is at particularly high risk of having significant student drinking on campus.

She conceded that drinking does have certain upsides, including increased social interaction and stress relief, but warned against over-drinking. She addressed the pop culture saying used by BC students, “work hard, play hard,” but advised students to consider “playing smarter” when it came to alcohol consumption.

Three student speakers shared their own experiences with alcohol. The first speaker discussed the difficulty in growing up with a father that suffered from alcoholism. She mentioned how her dad had missed a father-daughter dance her senior year of high school because he had been drinking.

“I never hated my father,” she said. “Only the disease that kept him from me.”

Guy Guenthner, MCAS ’17, discussed coming into college having tried alcohol in high school, with plans to continue. As a pre-med student, he found that going out several nights a week was not realistic. He instead had to find a balance between finishing school work and having a social life on the weekends. Guenthner’s ultimate point was about the stigma surrounding college students that drink, reiterating that it is possible for students to work hard academically, get involved around school, and still go out and drink with friends on the weekends.

Alex La Torre, LSOE ’17, grew up in a family that was comfortable with alcohol. She drank casually and carefully, encouraged by a mother that wanted to safely expose her children to drinking. Upon entering college, La Torre was taken aback by the drinking culture surrounding her, with so many of her peers frequently binge drinking. She emphasized that drinking doesn’t have to be about getting drunk, but can instead be a nice social activity when done in moderation. On some nights, she said she doesn’t drink at all and still has plenty of fun with her friends.

After the student speakers finished, attendees broke off into small groups, each facilitated by a health coach. Group members shared their own experiences with alcohol at BC, with topics ranging from how the culture changes each year to why students drink the types of alcohol they do.

“The event aims to spark dialogue, and I truly emphasize spark, because we don’t want the conversations of BC Ignites to end with the event but merely provide the initial outlet for students to express their thoughts,” said Theresa Rager, the director of student dialogue for UGBC, one of the organizers for BC Ignites, and MCAS ’17.

BC ignites Drinking Culture
The Muppets, They Are A Changin’
The Sister Act: Meghan and Katie Kelleher