Fetty Wap Puts On The Charm For Debut Album

Fetty Wap was launched into the public eye by the success of his debut single “Trap Queen,” which has gone on to become a bonafide radio juggernaut, peaking on the Billboard Top 100 Chart at No. 2. Accumulating over 250 million views on YouTube, a feat in and of itself, Fetty was further propelled into the pop music stratosphere with a helpful co-sign from Drake—the reigning King of Pop— on his track “My Way,” another Billboard smash. He has followed up the success of his two debut singles with three more (“679,” “Again,” and “RGF Island”) that have, so far, peaked at six, seven, and 61 on the charts respectively. With his recent musical onslaught, Fetty Wap has proven to be a ubiquitous radio presence and a preeminent force in the world of hip-hop today.

Widely considered to be one of the most anticipated projects of the year, his debut album, Fetty Wap, has finally arrived. Anxious to hear what their new favorite hip-hop crooner had cooked up for them, people took no time in downloading the LP. It currently sits atop the iTunes Album chart, second only to a joint album from Drake and Future, arguably the two most influential artists in rap right now.

The album’s commercial success has been solid, and deservedly so. Fetty Wap stacks this project from top to bottom with infectiously catchy hooks and upbeat production, making for irresistibly fun music.

His voice glides into every track dripping with auto-tuned swagger. While many see the use of voice enhancement technology as a crutch, Fetty seems to use it as an addition to the fact that he is a naturally gifted singer, giving his sound a unique flare and allowing room for even more impressive vocal acrobatics than he is innately capable of.

While his lyrics are admittedly simple and, at times,even laughably silly, his music possesses an undeniable charm. Fetty Wap sings a Siren song strong enough to lure even the staunchest lyric-lovers into the rocks of his Trap Kingdom. The sincerity in Fetty’s voice transcends the importance of powerful lyricism. He communicates more through the fluidity of his sound, warbling in and out of jubilant trap beats, than through the content of his lyrics. When listening to this album, you get the impression that you’re witnessing Fetty Wap in his purest, most honest form: naturally talented and indisputably fun.

The feel of this album is only further reinforced by Fetty’s genuinely earnest public persona. After winning a Music Choice Award for “Trap Queen” earlier this year, he accepted the award and went on to say, “This is actually the first award I ever won. I ain’t never won nothin’ in my life before.” He pauses for a moment in reflection, and then looks up from beneath his dreads to reveal that he’s actually crying—over a Music Choice Award.

From poignant moments like this to something as simple as referring to his legion of fans as “buddies,” Fetty Wap presents himself as a guy who is, quite simply ,humble, heartfelt, and happy to be here, and it is precisely that attitude that has helped to thrust him to the forefront of pop culture. This album has carved out a place in my heart for Fetty Wap, each song more endearing than the last. 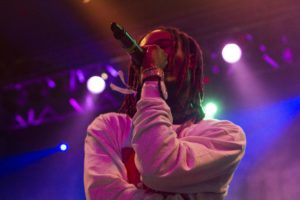