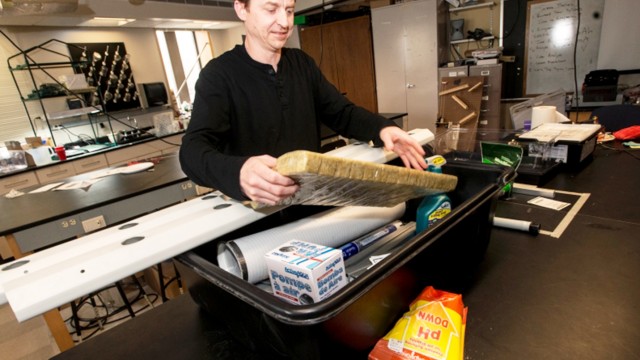 After Lynch School professor Mike Barnett presented at the Massachusetts Institute of Technology Maker Faire this past fall, the Chinese Delegation regarding American education systems and curriculum approached his research and development team, the Innovations in Urban Science Education. They began to discuss how they could collaborate to build upon the strengths of both systems.

Barnett has since been involved in an effort to develop a curriculum in China that incorporates a larger emphasis on critical thinking. For him, research opportunities at Boston College came in the form of the availability of the University’s greenhouse as a research and development space, as well as in the University’s support of his team in obtaining federal funding through the National Science Foundation and the USDA. In the past, he has done significant research, specifically in hydroponics, which has supported urban youth in various areas of their learning.

“Rote learning should be secondary to learning that supports critical thinking and creativity.”

—Mike Barnett, professor in the Lynch school of Education

China’s education system has typically been founded in rote learning, where the primary focus is memorization of facts. This has come, however, at the cost of further development in critical thinking, Barnett said.

“Technology has certainly increased our access to information, while reducing the need to memorize,” said Susan Bruce, professor and chair of the Teacher Education, Special Education, Curriculum, and Instruction department of LSOE. “The ability to apply what you know, solve problems, and see connections among what you’ve learned is critical preparation for a changing world.”

The Chinese education system is built heavily upon memorization and uniformity, Barnett said. This concentration is emphasized with the goal for students of performing well on the national test. The system works well for this outcome, but -hinders academic creativity. Still, China’s education system has been around significantly longer than America’s, and rote learning remains important in both countries.

Although Chinese educators initially wanted to adopt and implement the entirety of America’s curriculum at first, Barnett chose to take a different course of action. With the intention to preserve rote learning while implementing more critical thinking, Barnett began to evaluate the Chinese curriculum, along with his R&D team, particularly Anne Vera-Cruz, Paul Xu, Paul Madden, and Amie Patchen. They determined the concepts focused on in China, and re-wrote, or, in many cases, developed new curriculum materials that were better aligned with the concepts that Chinese teachers are expected to teach.

“This should help a Chinese teacher to utilize our materials in their classrooms since the lessons are now aligned with the concepts they have to teach,” Barnett said.

In May, Barnett spent a little over a week in China, visiting schools and after-school centers, and working with lead contacts in the nation. He has plans to return in November with Amie Patchen, one of the members of his Ph.D. team working on the China project. Then, they will visit new schools, as well as receive feedback from teachers on the revised curriculum. Ultimately, they will begin training teachers sometime in January 2016.

The hope is to slowly expand to 500 teachers over the next three to five years. Barnett is working toward creating a core set of master teachers in China that will begin the shift to a problem-based teaching approach. This will allow for the system to spread from within the country, with less support needed from the team in America.

In this development, Barnett hopes to engage students in the Lynch School in teaching in China, beginning in the summer of 2016.

One of the major focuses of the project, however, is not just altering China’s curriculum, but also on learning from the benefits of their system, Barnett said.

“One of the biggest differences is that teachers are highly respected in China, and in the U.S. they are not and are often blamed for the system’s shortcomings,” Barnett said. “The respect for teachers is something that the United States can learn from China, for sure.”

As a result, the project is a five-year experiment to integrate problem-based learning and, if promising results arise, a much longer-term initiative, Barnett said.

“We hope we will be able to support youth in learning science through a way that encourages them to be critical thinkers and to support them in not just learning about the ecological footprint of their nation, but also how to help reduce that footprint,” Barnett said.

“We also hope to do the same with teachers … that we will learn from them how we can leverage what they do well to improve our work here in the United States.”