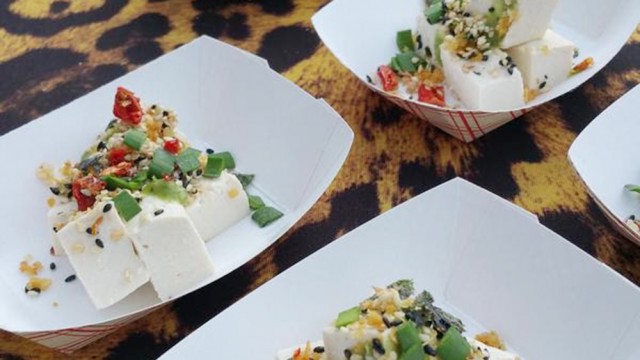 From a young age, dumplings have been on Matt Cunningham’s mind. Now, the 32-year-old chef is looking to add exotic and innovative flavors to a familiar Asian staple. The owner and executive chef of Pink Samurai is attempting to bring his fast and casual restaurant to a Jamaica Plain. Pink Samurai will be moving into the space formerly occupied by the Chinese restaurant Charlie Chan’s and will provide a laid-back atmosphere and “a place people can come multiple nights per week,” Cunningham said. The restaurant is scheduled to open in just a few weeks.

Although Pink Samurai is not officially open, Cunningham and the staff of Pink Samurai recently participated in the “Taste Of Jamaica Plain festival” where they received much praise from the local community after dishing out specials of steamed and fried dumplings stuffed with gourmet ingredients such as foie gras, fermented sweet peas, and confit duck soup.

With a number of restaurants emerging in Jamaica Plain, Pink Samurai is looking to place greater focus on the vegan and vegetarian communities. Cunningham hopes his house-made tofu will attract a larger number of health-conscious customers, and heavy foot traffic on Centre St. in Jamaica Plain will satisfy a craving people have been waiting for, he said. He hopes hisa dumpling’s craze will attract a large amount of people in Jamaica Plain. Cunningham believes that the positive feedback he has already gotten over his dumplings is a promising indicator for the opening of Pink Samurai.

Pink Samurai will incorporate a fast-casual format to supply customers with his decadent dumplings. The restaurant will offer a relatively small menu of 20 items, and Cunningham claims that every option on the menu is his favorite, because the intricate process for creating each dumpling is so rewarding to the chef.

“One of our handmade dumplings will have foie gras, peach kimchi, and pig skin cracklings,” he said.

Cunningham explained that everything will be made in-house, including vinegar and tofu, as well as sodas and juices, and the chef will be using locally sourced ingredients when possible. The menu will also change frequently.

Cunningham made the conscious choice to not be firmly rooted in traditional Asian cuisine, instead branching out and using European techniques and ingredients, such as foie gras in a traditionally Asian dumpling. Apart from dumplings and house-made tofu, Pink Samurai’s menu will feature small plates—such as thick chicken wings and crab rangoons—soups, and steamed buns.

Although Cunningham’s wish for Pink Samurai is to appeal to all ages, the fast and casual restaurant with a newly renovated interior will be aimed at a younger, college crowd.

“Things will be priced as reasonably as we can,” Cunningham said. “Food will be quick to prepare and we are planning on being open late.”

College students finding themselves craving dumplings late at night can now satisfy their desires, as Pink Samurai will most likely be open until 1 a.m. on weekdays and later on weekends. Cunningham hopes the relaxed atmosphere will be welcoming to the average student—he does not want to create “a stuffy restaurant treated as something for events and special occasions,” he said. This is a normal misconception, as traditional gourmet dumplings are typically served in upscale conditions.

With an opening date just a few weeks away, plans for the future are already in the works for Cunningham.

Fresh dumplings and tofu available at grocery stores or more local, organic markets is one real possibility, and would provide customers easy access to Pink Samurai’s gourmet menu across the Boston area.

Looking to the future, expansion of operations for Pink Samurai is on the horizon, as well as “the possibility of some of our product, such as our own house-made tofu or dumplings, being made available in other markets,” Cunningham said.

pink samurai
Snapping Out Of The Technology Mirage
TU/TD: October Is Rolling