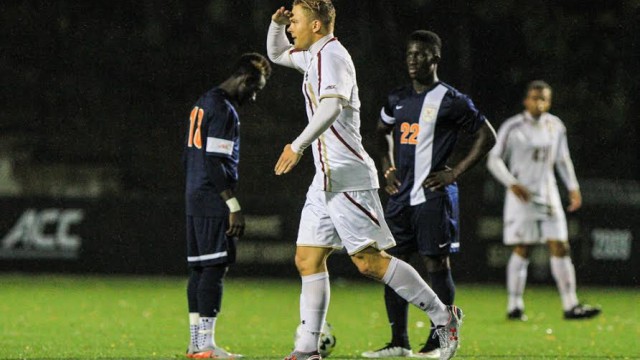 Simon Enstrom might not speak the most perfect English just yet, as it’s the Swede’s first year in America, but he described his 58th minute game-winning goal perfectly.

“It has nothing to do with me, it’s just Zeiko,” he said. “I drop it to him and then he does magic.”

An act of wizardry is just about the only way you can categorize Zeiko Lewis’ assist. With no room for error in front of the net, Lewis chipped an inch-perfect ball to Enstrom, over the defender and just far away enough from the oncoming goalie.

It was no easy finish for the Swede though, who stretched for the full volley before the keeper could get there for his second goal of the night.

In some games, a team needs that kind of magical moment to pull out a win. The team will be overmatched completely, but hang in there just enough for one moment of brilliance to be the deciding factor. In Boston College’s (8-3-1, 3-2 ACC) 2-1 victory against No. 10 Virginia (7-1-3, 2-1-2 ACC), however, this was not the case.

The game-winning goal was magic, sure. But it wasn’t the flick-of-a-wand type of magic, where something just emerges out of mid-air from a puff of smoke. It was more of a potion, in which the goal resulted from a potent mix of stellar play from defense to forward.

Enstrom’s work before the goal, for example, showed the end-to-end quality from BC. Simon received the ball in the defensive third, and played a long ball to Trevor Davock, who collected it on the left sideline. Enstrom then ran the length of the field to get the ball back from Davock before playing the give-and-go with Lewis. Covering three quarters of the field, Enstrom used only three touches on his way to scoring.

From start to finish, the play was an example of soccer at its finest, and BC was creating those types of sequences all night long.

At the start, the Eagles took advantage of its size to put UVA on its heels. Enstrom was magnificent in hold-up play, constantly winning the ball with his head and finding a teammate. He put himself in the position to do this by matching up with UVA defender Sheldon Sullivan, who is two inches shorter than Enstrom.

Balf similarly had his way with aerial duels, constantly heading the ball back up field. The Cavaliers enjoyed bouts of possession while keeping the ball on the ground, but they couldn’t handle BC’s height.

The first breakthrough came just after the half hour mark. The play began when Enstrom, despite not getting his head on the ball, did enough to box out the defender so that the ball could fall to his feet. Enstrom found Lewis, who then got just enough on his flick to place the ball in the path of the oncoming Mohammed Moro. Dribbling to the top of the box, Moro fired a shot at goalie Jeff Caldwell, who couldn’t handle it cleanly on the wet turf.

Enstrom instinctively crashed the net and put in the rebound. The goal wasn’t just a simple tap-in, though. Enstrom brilliantly chipped the ball into the top corner, avoiding the outstretched Caldwell, who might have made the save if Enstrom had just tapped it.

On both goals, Enstrom started the play and finished it, which shows just how complete his game is.

The other difference maker for the Eagles was Moro. After playing left back all of last year and starting there this year, Moro moved to left outside midfielder against Brown, and started there against UVA. The tactical switch has already paid off for Ed Kelly, as Moro scored the lone goal in the win over Brown on Tuesday and created the chance for the first goal last night.

“He’s better there. That’s his better position,” Kelly said while also noting that Moro originally started as a striker in his native Ghana.

As a defender, the speedy Moro was attack-minded, resulting in a lot of times where he was caught out of his position when balls were played over his head. In the midfield, he has free reign to run at defenders with pace at will.

The Cavaliers did well to shut down Davock on the opposite side of the field, but that only left Moro with acres of space every time he got the ball. For most of the first half, BC’s offense was generated when Zeiko turned in the midfield to switch fields and give it to Moro. Leaving a player with Moro’s speed left open proved deadly for UVA as it directly led to the first goal. Watch as Zeiko finds Moro. The man who should be marking Moro is caught up field and in the middle, so Moro only has one defender in front of him.

Injuries were the only thing that hindered Moro and BC’s offense. After both starting fullbacks, Derek Lyons and Joshua Forbes, had to exit the game, Moro was forced back to his former position in the 52nd minute, as Kelly opted not to throw newcomers into the backline.

Despite losing two starters, the defensive shape and effort was solid all game. Len Zeugner and Toby Ampadu commanded the middle of the defense, and Zuegner in particular came up with two huge clearances down the stretch. While Davock couldn’t get the wheels turning offensively, he performed his defensive duties effectively the full 90.

Throwing everything forward, the Cavaliers eventually broke through the stout defense off a corner in the 85th minute. Up until that point, BC counterattack was giving UVA fits as the visitors pushed higher up the field and played less defensively, but the UVA goal sparked a last-ditch effort for the final five minutes.

Cedric Saladin was in fine form all night for the Eagles, but he looked especially sharp when it mattered most, coming up with a diving save with a minute left

Under high pressure, BC’s inexperience almost gave the game away. With 20 seconds left, Abe Bibas committed a rash foul about 30 yards out and received a yellow card for clobbering the opponent. UVA couldn’t capitalize, though, as the free kick soared over everyone’s head and past the endline, securing Kelly’s 299th career win with BC.

BC narrowly held onto the lead in the final minutes, but for the other 85 minutes of the game, BC was the better team by a wide margin.

While magic might be the right term to explain some of the moves Zeiko pulls, it doesn’t quite describe BC’s upset win. Magic implies some unknown quantity, but BC’s performance was laid out for all eyes to see.

One play might be magical, but a whole team? No, BC is just that good, and they proved it against the No. 10 team in the country.