Home » Two Second Half Goals By No. 4 Duke Sink BC 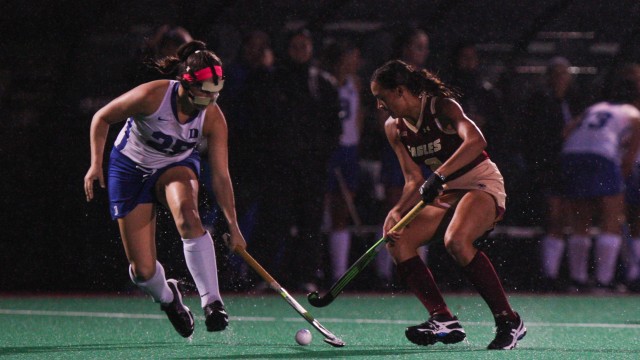 Two Second Half Goals By No. 4 Duke Sink BC

Boston College field hockey didn’t wait for the rain to fall to start its game—in fact, the Eagles moved their match up an hour earlier, trying to avoid the inclement weather. The storm came anyway, sending players and sticks slipping and sliding. Despite the sheets of rain coming down on them, the Eagles managed to play the “best 70 minutes that we’ve played all year,” according to head coach Kelly Doton. The Eagles could not lock down a win in those 70 minutes, falling to the Duke University 2-1.

The game started off slowly, perhaps due to the quick schedule change that gave both teams less time to practice. The teams essentially warmed up in the first half, particularly the Eagles, who played two penalty corners, but couldn’t score on either. The second penalty corner came close to a goal, after Ymke Rose Gote’s initial shot ricocheted off Duke goalie Lauren Blazing’s foot. Another member of the Eagles attempted a shot, but the ball went to high over the cage.

The second half brought new energy to both the Eagles and the Blue Devils. Five minutes in, Emily McCoy shot hard towards the goal. Before the ball went out of founds, Emily’s sister Eryn secured the goal by tapping it into the cage. Eryn and Emily prove to be a strong offensive pairing, as Emily assisted Eryn on her first goal of the season against Providence earlier in the fall. “We can be very intense with each other, but we know we want the best out of each other,” Emily said.

Duke responded quickly to BC’s goal, with fullback Amanda Kim scoring on an overwhelmed Leah Settipane in the 44th minute. Settipane, who dove as the Blue Devils surrounded the net, could not gain control of the ball through the sticks and pelting rain, and Kim wrestled the ball out and hit it high into the middle of the net. The goal did not create cause for alarm, but a play 10 minutes later by Duke put a win for the Eagles out of reach. After receiving a pass from Alyssa Chillano, Ainsley Gill shot past Settipane for another Duke goal.

Settipane notched four saves against the Blue Devils, putting up a strong fight even through the rain. Settipane is one game shy of breaking the BC record for most wins in field hockey. According to Doton, Settipane’s 42nd career win is coming soon. “[The team] wants to win every single game, regardless if records are broken,” Doton said, “but it’s a good sign for us.”

The Eagles outshot Duke 17-8, displaying BC’s inability to finish off well-executed plays. “We couldn’t have executed the gameplan more,” said Doton. “I think maybe putting the ball in the back of the cage on all the opportunities that we had, obviously the outcome would be a little bit different.” The Eagles tried to follow up every shot with a rebound, but only the one goal stuck. BC stayed in the game to the last minute, playing a penalty corner after time had run out. The last shot failed to reach the cage, instead going out of bounds.

BC, ranked No. 10 in the NCAA, gave No. 4 Duke a run for its money. Keeping the Blue Devils at bay until the second half shows strong defense, and with shots 7-3 in favor of BC at the half demonstrates the Eagles’ ability to break through an ironclad defense. With an all-star sister act and a record tying goalie, Doton is optimistic despite the loss: “We’re right where we need to be.”