Home » Twin Takeover Tortures BC In Loss At Notre Dame 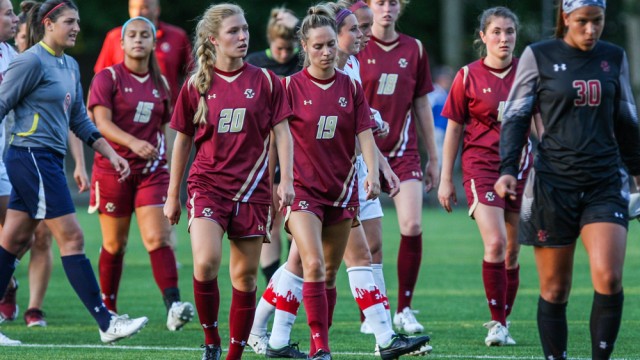 Twin Takeover Tortures BC In Loss At Notre Dame

Twins Taylor and Kaitlin Klawunder secured the University of Notre Dame’s victory in today’s tough matchup between ACC rivals. Boston College (9-5-1, 3-2-1 ACC) fell to the Fighting Irish (10-3-1, 3-3 ACC) in a 2-0 loss in South Bend, Ind. The teams last met in 2014, when both schools walked away with a 1-1 tie after double-overtime.

Immediately after the starting whistle, the Eagles faced high pressure from the Irish. Within the first four minutes of play, Notre Dame got off four shots on BC goalie Alexis Bryant. A redshirt freshman, Bryant came into this match with an impressive .821 save percentage in the previous nine games. Yet it wasn’t enough to stop the Irish offense. Notre Dame’s quick transitions from its defensive to its offensive-third were the reason for its success in this match-up. Notre Dame’s high pressure forced BC to give up the ball, making it difficult for the Eagles to string together effective passes through the midfield.

Notre Dame’s relentless defense and active offense awarded them several corners in the first half. In the 27th minute, Taylor Klawunder scored her third goal of the season, capitalizing off one of these corners. The Irish upheld their attacking speed and continued to run at BC’s defensive line. By the end of the first half, Notre Dame outshot BC 15-0.

While the Eagles came out in the second half with more defensive energy, their efforts were not enough to stop the determined Notre Dame offense. Eleven minutes into the second half, Notre Dame junior Sandra Yu drove a shot on frame, which was deflected by Bryant back into the box, where Kaitlin Klawunder, who had just subbed into the game, headed the ball into the net to give Notre Dame a 2-0 lead.

While this second goal seemed to statistically seal Notre Dame’s win (who have only ever lost one game with a 2-0 lead), BC’s offense refused to surrender. In the last 20 minutes of the match, the Eagles came alive with an energetic attacking effort. Ripping off five shots in the few remaining minutes, BC saw several more opportunities to score with four corner kicks and a set piece just outside the 18-yard box. With some beautiful combinations between McKenzie Meehan and Hayley Dowd, the Eagles looked ready to retaliate for the previous 70 minutes of defensively minded soccer.

Yet, in the battle of superstar twins, BC’s own set of sisters, McKenzie and Madison Meehan, were not as effective in today’s matchup against Notre Dame as the Klawunder’s. Despite their best efforts, time ran out for the Eagles, resulting in a loss to the Irish, and a fulfilling game for the Klawunder family.