Home » Eagles Roll Along In 7-4 Win Over St. Lawrence 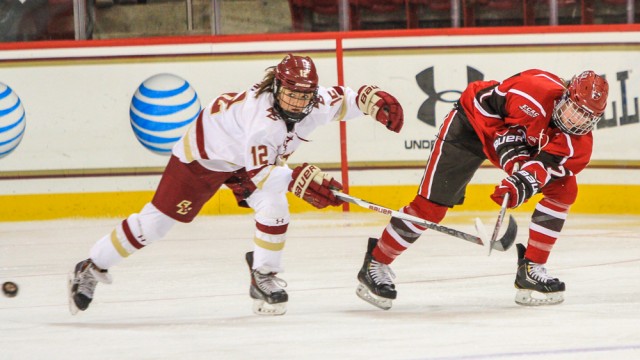 Eagles Roll Along In 7-4 Win Over St. Lawrence

Kali Flanigan storms down the ice with the puck in tow. She dishes the puck off to Megan Keller, who takes control. From the edge of the circle she winds up with no defenders nearby. The goalie anxiously eyes the puck from in between the pipes. Keller shoots. She misses wide right. The puck hits the backboard and flies around the goal to meet Haley Skarupa’s stick. She sweeps the puck into the net as the goalie dives from the opposite post, giving BC another tally.

The Eagles came out hungry and applied early pressure. The offense kept firing at Saints’ goaltender Sonja Shelly to no avail. To get things going, the defense had to take control. From BC’s defensive end, Kenzie Kent headed down ice before passing the puck off to Alex Carpenter. Defender Toni Ann Miano moved alongside Carpenter, who sent her the puck. Miano’s initial shot hit Shelly’s pads, but Miano stayed along the post and sent the rebound into the goal for a 1-0 lead.

“Toni was hungry for that goal,” BC head coach Katie Crowley said. “Sometimes our forwards try to get too fancy where the D will go take a shot and go get the rebound and keep it simple.”

For the remainder of the period the offense still struggled to get past Shelly, attempting weak side and backwards shots. With 8.7 seconds left in the period and an expiring power play, defender Megan Keller had to step in and put an end the showy strikes. With an assist from Carpenter, Keller nailed one into the net to give BC a 2-0 lead.

After the first intermission, it seemed BC had fixed its offensive woes. Seventeen seconds into the second period Carpenter scored to make it 3-0. However, the offense could not keep it going. The defense tried to step up but got ahead of itself, failing to give Katie Burt the support she needed in front of the goal. “We tried to take things in our own hands instead of using our teammates,” Crowley said. “When we do that in the neutral zone and turn over the pucks then they are going to come out on the attack.”

With back-to-back goals midway through the period, the Saints showed some life and were ready to put up a fight. After a constant back and forth battle, Haley Skarupa gave BC a little cushion at the end of the period to head into the final frame with a 4-2 lead.

The Eagles were quiet on the offensive end for the first four minutes of the period. Keller once again stepped up from defense with the assistance of Carpenter. Scoring her second power play goal of the game, Keller gave her team a 5-2 lead with 15 minutes to play.

The offense took Keller’s energy and simplicity to make a charge 45 seconds later. Andie Anastos fed Meghan Grieves up the boards and she then found Tori Sullivan in front of goal. Sullivan put one past Shelly to give her team a 6-2 lead, potentially shutting the door on the Saints.

The Saints were not ready to call it quits and continually knocked on Burt’s door. After sneaking in two past Burt, the Saints trailed 6-4 with five minutes remaining.

The Eagles’ defense held its ground, denying the Saints any access to the goal. With 1:07 left in the game, St. Lawrence pulled its goalie. Freshman Makenna Newkirk took a deflected shot from the defensive end down the ice and slid it into the empty net for her first career goal, putting a little bit of icing on the lackluster win.

The Eagles maintained their composure to close out a 7-4 win, but Crowley was clearly not too impressed. “It was an ugly win, kind of a some fluke things that happened to us,” Crowley said. The Eagles had to feed off not only St. Lawrence’s mistakes but their own. B slowly, the Eagles are learning from Crowley. “You’re going to have to be on your game for a full 60 minutes,” Crowley said. “You can’t take a shift off.”