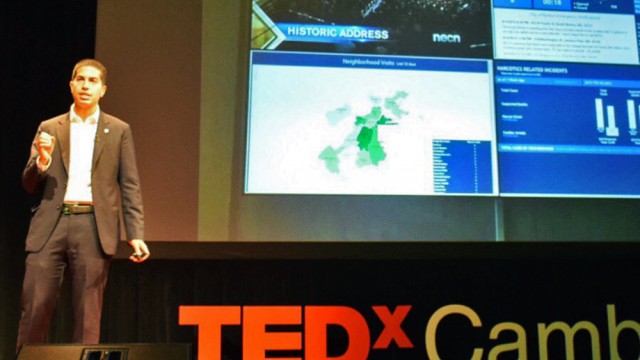 A red circular carpet decorated the otherwise bare stage at the Back Bay Events Center last Thursday as a crowd of academics, students, and curious citizens inquisitives sat in anticipation of for the TEDxCambridge Fall event to begin. Locally organized and run, TEDxCambridge followed in the steps of other TED Talks, designed to bring together communities for a night of discussion in the spirit of the Ted organizations’ “ideas worth spreading.”

Koh asked the audience: Can similar data analytics be applied to the government in order to optimize performance and curb slow bureaucratic operations? Upon induction to office, Walsh and his administration asked cabinet members to develop a similar set of metrics that could be monitored and serve as a benchmark for performance evaluation. Koh described the City’s partnership with BigBelly waste management, which, as of January 2015 had installed over 700 solar trash collectors throughout Boston. Data processed by these collectors have enabled waste collection based on off demand, making the process more efficient.

Optimization has also been extended to traffic synchronization, and the City announced its partnership with the Waze traffic app this past February. Further, the City developed and instituted an app called “Boston 311” in August, which allows citizens to self-report anything from graffiti to potholes and then receive updates after the jobs have been repaired. Since its implementation, 39 percent of requests to the Mayor’s office have been submitted digitally using the app.

Following Koh, Adam Cohen, a professor of chemistry, chemical biology, and physics at Massachusetts Institute of Technology, shared his research on neuroimaging with the audience. Cohen describes himself as an electrophysiologist because he explores the electrical mechanisms of neural impulses. These electrical signals are responsible for constructing our experiences and cognition of everyday experiences, he explained.

“From the sound of my voice to the memory of your first kiss, everything is just electrical blips,” Cohen said. “That’s all it is.”

Previous techniques in studying neurons have been limited by methodology. Voltage probes could only monitor cells in one region of the brain, and therefore provided limited insight into the macroscopic neural network. This limitation, as Cohen described, was “like watching an opera through a straw.”

Using properties of proteins found in an English algae and a microorganism from the Dead Sea, Cohen and his colleagues were able to modify neurons so that that were could be stimulated by light and respond by emitting light. This combination served to reveal the specific physiology of neurons firing. Using this technique, Cohen and his team have managed to take skin from patients suffering from motor neural disorders, like ALS, and grow neural tissue to study the responses of the cells. Due to this work, researchers have isolated specific characteristics of ALS that may be treated by a preexisting epilepsy medication. A clinical study is currently underway to examine the use of the drug in treating ALS patients.

The closing presentation featured the director of MIT’s Laboratory for Financial Engineering. He began by prompting the question: “Can financial engineering cure Cancer?”

Citing annual trends in cancer research finance, Andrew Lo argued that funding for cancer treatment development is decreasing as financial riskiness is increasing. Lo noted that this leads to an adverse consequence. “Our financing drives our scientific agenda,” he said, rather than the logical converse.

Lo also suggested that financial engineering could improve these odds by helping to lower risk. “If we don’t talk about investment rates of return, we won’t get the funding needed,” he said.

Creating a super fund by selling cancer bonds would yield a return for investors if structured the right way, Lo said. Investing in 150 separate drug projects at the simultaneously yields a 98 percent chance that at least three of these drugs will be successful.

“With the right expectations, the right financing and the right vision we can accomplish amazing things,” he said.

Lo echoed a common thread among the series of speakers: vision and initiative are the catalysts for innovation and change. Whether speaking about in the forums of civil service, science, or financial markets, the speakers at TEDxCambridge argued that finding novel and effective ways to approach issues can yield powerful results.