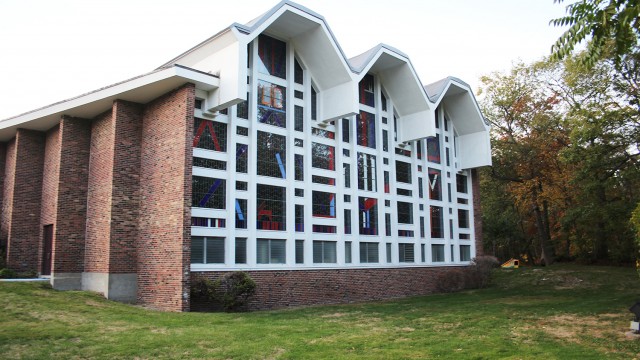 Members of the synagogue Congregation Mishkan Tefila (CMT) voted to approve Boston College’s acquisition of the 23 acres of land it owns at 300 Hammond Pond Parkway in Newton. This land, formally acquired by BC on Sunday afternoon, consists of 14 acres of wooded land and nine acres of developed property, where the synagogue resides. The property is about 1.2 miles from main campus.

Over two-thirds of the congregation voted to approve the sale, more than needed for the sale to go forward, said Ted Tye, a managing partner of National Development who was hired by CMT to represent the synagogue in evaluating options for its property and ultimately negotiate an agreement with BC.

“There was no one who spoke against the sale,” he said in an email. “The congregation was enthusiastic about moving ahead with its plans for the future. The sale will allow them to focus on next steps. Boston College has not commented further on their plans.”

University Spokesperson Jack Dunn said he cannot comment until the deal is officially finalized in the spring of 2016. In August, when the sale was first announced, Dunn said that the land would be used for administrative buildings and parking lots.

“The congregation was enthusiastic about moving ahead with its plans for the future. The sale will allow them to focus on next steps.”

Members of the Newton community recently spoke out against the land sale, citing environmental concerns and arguing that the wooded property being purchased ought to be conserved. The aldermen of Newton passed a resolution urging Mayor Setti Warren to conserve the wooded land owned by CMT, either by purchasing the property or placing conservation restrictions on the land, which is criss-crossed by hiking trails and is used by residents to walk dogs and run.

The synagogue will remain on the property until 2019, and will then likely move to another location in Newton.

“It’s sad because there are so many members that have such a history in the building itself, and that’s a difficult thing for our congregants,” Congregation President Paul Gershkowitz said about the sale in August. “But we also are very excited about our future and reestablishing Congregation Mishkan Tefila as a viable entity moving forward.”