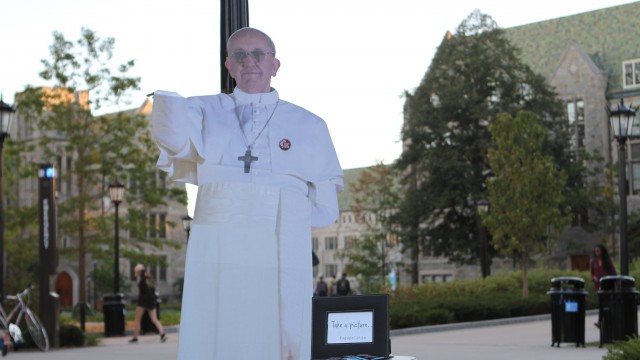 The Student Assembly of the Undergraduate Government of Boston College rejected—nine yes, 14 no, and six abstentions—a resolution on Sunday night that would symbolically align UGBC with the moral purpose of the University and endorse BC’s Jesuit history and identity. The resolution was sponsored by Senator Hagop Toghramadjian, President Pro Tempore and MCAS ’17.

Toghramadjian decided to bring the resolution to the Student Assembly in light of the Pope’s recent encyclical addressing climate change, his subsequent visit to the United States, and Cardinal Peter Turkson’s address to BC students. The bill should not be viewed as a pointless reaffirmation of the University’s Catholic values, he said. Rather, and most importantly, it should be a point of reflection about what it means to be a Catholic university and why BC as a community should be proud of that distinction, he said.

“More than anything else during my time here, the Catholic identity has been used as an excuse to stifle any attempt to foster an environment of respect, dignity, and love for all Boston College students.”

At the same time, Toghramadjian believes that it can be a useful policy tool when working with the administration. He said that showing the University that UGBC is on the same page with the administration would go a long way in achieving compromise on certain community issues that UGBC has tried to address through policy changes such as free speech. Despite differing interpretations or perspectives on social issues, Toghramadjian believes it would be easier to push the envelop with new initiatives if there’s an underlying trust between the administration and UGBC.

“I think that all of our initiatives will go through more smoothly if we pass this bill because it’s basically saying to all the stakeholders at the school that we share their basic philosophy,” Toghramadjian said.

Senator Eileen Corkery, MCAS ’17, who helped co-sponsor the bill, said that UGBC should not frame BC’s Catholic identity as a weakness or as something that limits progress on campus, but should instead look to it as a strength. As leaders in student government, she said, members of the Student Assembly should stand up for what they believe in.

Though the bill had support from other members of the Student Assembly, the students who opposed the resolution were very outspoken and believed that the resolution could actually alienate undergraduates from the organization or make UGBC seem like a religious body.

Collin Pratt, director of policy in the GLBTQ Leadership Council and MCAS ’17, said that the LGBTQ community at BC has felt the effects of the Catholic identity at BC. He said as a result of that identity, the entire community has been disrespected and unrecognized.

“More than anything else during my time here, the Catholic identity has been used as an excuse to stifle any attempt to foster an environment of respect, dignity, and love for all Boston College students,” Pratt said. “If we pass this resolution, the name of Catholic that we label ourselves or endorse ourselves, will not liberate us. It will limit us.”

Senator Connor Kratz, MCAS ’18, among others, took issue with the phrase “see beyond the current dominant culture and act consequently”—taken from Cardinal Turkson’s speech—that was used in the resolution. Toghramadjian said that the phrase meant UGBC is not expected to pass a resolution like the one proposed, but Kratz believed that the phrase was too vague and could be used to the administration’s advantage. When it comes to BC’s administration, he said, ambiguity leaves a lot of room for policy discretion, which could be used to enact other policies that discriminate against students who don’t perfectly conform to Catholic ideals.

“UGBC has a lot of potential this year to make a lot of social progress and I think that could potentially be stymied by this resolution,” Kratz said.

Despite the failure to pass the resolution, Toghramadjian said that he and the co-sponsors plan to introduce a revised version next Sunday. He said that the debate during the meeting was encouraging in and of itself, because it is the first contentious vote that UGBC has had in the three years of his participation.

“I’m glad we had a reflective and thoughtful debate tonight—I consider the discussion a victory in itself,” Toghramadjian said in an email.