Home » ‘You Have To Make Room:’ Daniel Dae Kim On Race, Show Biz 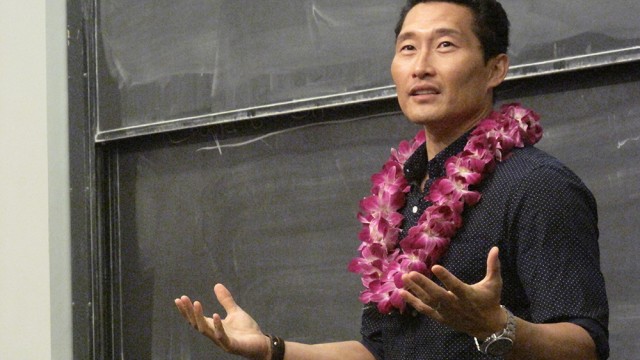 ‘You Have To Make Room:’ Daniel Dae Kim On Race, Show Biz

When actor Daniel Dae Kim took the stage in Devlin 008 to detail his secret to looking so young—exercise, face-washing, and rigorous TV makeup—the audience burst into laughter and applause.

After prefacing the event with a brief autobiography, he addressed audience questions, especially emphasizing the role of race relations and the role of Asian-Americans in media. Nearly every seat in Devlin 008 was filled.

Kim donned an honorary Hawaiian lei as he explained his personal background, born in South Korea but raised in New York and Pennsylvania. He described himself as a heavily-involved high school student without a concrete group of friends. While at Haverford College, he majored in Political Science but decided to leave his legal aspirations behind to pursue his calling—acting.

“I knew that if I had done that then I would always be asking myself, ‘What if?’” he said regarding his decision against pursuing law.

Kim cited his childhood role models as those most successful Asian actors at the time: Bruce Lee, Jackie Chan, and George Takei. He expressed, however, that his relationship with Bruce Lee in particular has been complicated to navigate, as Kim believes that while he was certainly influential, some of his roles promoted harmful stereotypes of Asians and Asian-Americans. He lauded programs like Fresh Off the Boat and Dr. Ken as marked differences from usual Asian acting roles.

Approaching Lost from this standpoint was difficult to Kim at first. He initially perceived his character, Korean-speaking Jin-Soo Kwon, to be a negative portrayal of an Asian man. Writer and Executive Producer Damon Lindelof asked him to wait to pass judgment and that change would happen.

“I didn’t want people to think ‘Well, all Korean men are like this, all Korean women are like this,’” Kim said. “One of the best things about television as a medium is that your ride isn’t over in two-hours like it is in a movie theater. In a movie, you watch your character begin and end. In TV, we got to watch a character grow for six seasons, for six years.”

Kim described his approach to the character of Jin as nuanced and with a clear vision, explaining that all of his complex actions could be rationalized as manifestations of overprotectiveness. This subversion of traditional Korean matriarchal values and his Korean language ability were the two principal criticisms he identified from the Asian community, which at least represent a far cry from typical accusations of gross misrepresentation.

Kim also lauds television as a medium for improving race relations relative to other media, as it requires shorter-term investments in unusual decisions like minority hiring. Kim encouraged and praised shows like Fresh Off the Boat and Dr. Ken that contextualize Asian-American experiences, but he believes that there is still ample room for improvement in Hollywood, discussing the institution of minority quotas that induce strict competition for roles, the pervasiveness of stereotyping in writing, and the dearth of lead roles for Asian heritage actors.

Kim stressed that minorities should create their own opportunities for success rather than waiting for offers to appear, noting that the problem lies not only in the underrepresentation of Asian actors and characters but writers, agents, producers, and many components of the media creation process. His talk especially conveyed his admiration for Asian YouTubers who have cut around the mainstream media and have grown their grassroots fame independently.

“There’s a statement I learned early on in my career,” Kim told the audience. “‘There’s no room for you in show business. You have to make room.’”

Kim spoke contentedly about his home in Hawaii in the same context. While he praised Hawaii’s natural beauty as a setting for his family during multiple stable television roles, he also spoke to a local cultural relatively freer from racial discrimination than those of other regions.

“For an Asian-American person, there’s no more harmonious place where you can live and speak English at the same time,” Kim said.

Though the conversation of the night consisted largely of show-specific inquiries and those about Asian-American representation in media, Kim diverged from these topics to discuss his choice to pursue an artistic career, as the audience was composed of students likely with career decisions to make.

“I felt the need to represent stories that I hadn’t heard before and seen before,” Kim said. “Ultimately, we all, every one of us in this room, have a story to tell about our family, and our past … I just wasn’t hearing a lot that resonated with me. So I think that drove me to tell them myself.”

He encouraged students to explore different subjects and, with a practical plan and proper skills, to pursue what they feel to be their calling.

“Especially at a place like this, keep exploring,” Kim said. “You’re never going to have another opportunity like this.”

Correction: The original article incorrectly referred to a television show as Dr. Kim. The correct name is Dr. Ken. The article has been updated to reflect this.

Featured Image by James Clark / For The Heights