Home » Writing Straight To The Heart Of The Medium 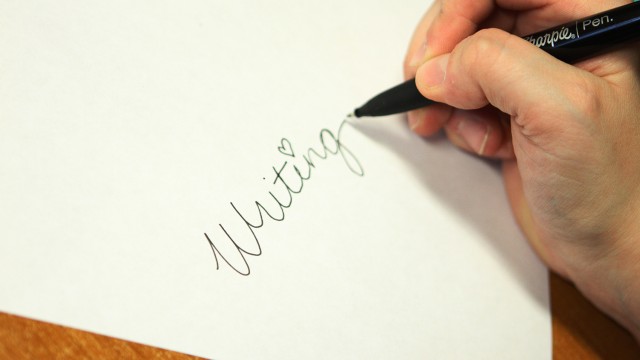 Writing Straight To The Heart Of The Medium

Last Saturday, I walked out of my girlfriend’s bedroom in Voute Hall and shut the door behind me. I didn’t think it was that weird.

But apparently, I’m the only person to do this in the two months that she has lived there, because when the door clicked shut, it locked. My backpack, jacket, laptop, and her only set of keys were all inside.

Now, did I think this was the worst thing that had ever happened to anyone?

Not so much the jacket and the phone—I could live without those. It wasn’t very cold that night and everyone who usually texts me was preoccupied with driving my sister to tennis and other mom stuff like that.

But my computer—the one with the 500-ish word draft of this column on its desktop—was still locked inside, 10 feet and one (unnecessarily) thick wooden door away. Later, while everyone else was playing with the lock and coming up with solutions, I sat on the couch, sulking.

Briefly, I considered scribbling what I already had from memory and finishing the column on paper. Like, with a pen and everything. That way I could just type it up on Sunday morning (when the draft was due) and avoid the desolate, desperate, and allegedly vampire-ridden landscape that is O’Neill Library on a Saturday night. Both thoughts were unsettling.

Anyway, to jump ahead a few hours, they got the door open with a credit card or something—I’m not really sure. (Like I said, I wasn’t helping.) Regardless, everything turned out fine. I got my laptop back, and no one had to sleep outside or write on paper.

But I started wondering where the dread at the thought of having to do so really came from. Why did writing with a pen seem so inherently ridiculous?

I thought about it some more and came up with … nothing. So, I decided to scrap what I already had done and start over on paper. Without using the computer, that is.

How bad could it be, right?

The few words I’d already come up with weren’t really anything special anyway—just the conclusions that I’ve come to during a few years of AIDS research in my basement. I think I’ve got a trial cure ready, but we can talk about that in two weeks—right now, I’ll stick to this whole writing on paper thing.

Getting down to business: Everything you’ve just read was written, initially at least, on blank sheets of computer paper—no lines, no margins—with a silver fountain pen. Before you ask, I did look for one of those big feather and inkwell sets, but CVS was out. Having thrown a small fit in the store, I went home to work.

According to my rigid, self-enforced rules, I did not:

Assuming that there is a lesson here, I’m determined to learn it—for all of us.

Right now I’m what, halfway through? Can’t tell without that word count on the bottom of the screen. God I miss that.

My handwriting is also much worse than I remember. Over the years, I guess, it has gotten to be so bad that I can hardly read it myself anymore. What it amounts to is this unintelligible system of loopy, half-cursive symbols and haggard bumps, for which I often apologize in the margins of written exams.

I’ve got three sheets done, and the first one is about 60 percent scribbles and cross-outs. I tried four different first sentences, and spelled the word “preoccupied” wrong three times. I also looked twice for a backspace key, and tried to cut and paste one whole paragraph.

Rough start, but on the whole, not as bad as I thought.

In all likelihood, the problem is that I’ve never used written letters for anything but transcription or note taking. This is the first time in years that I’ve used it to form good sentences or paragraphs.

By the fourth page, things are moving. I’ve learned to think things through before setting them down. The actual writing is slower, too. The words are all neater, arranged in straighter lines, and letters are starting to get out of each other’s way.

It’s actually gotten to be nice, writing without consideration of length or page limits.

In their absence, I think, the only metric for successful prose is how well you’ve expressed the idea that’s in your head on paper. Which I suppose shakes out to this: Once you get used to all the limitations of pen and paper, they really do start to work in your favor.

In fact, the slower pace seems more conducive to human patterns of thought than working with a word processor. Ideas come only as quickly as the hand can move, and develop fully in the slow seconds between letters.

It’s such a perfect process that the mind actually begins to crave all the subtle pauses. A rhythm develops, the writing gets slower and letters start looking good—plus, you can follow the line of your reasoning across a piece of paper, and it looks nice, although it’s also strange, writing when you had spent so much time staring at the warm glow of your computer screen. Strange, but not entirely inhospitable. For good, well-reasoned writing, slow strokes of the pen might even be the best way to go.