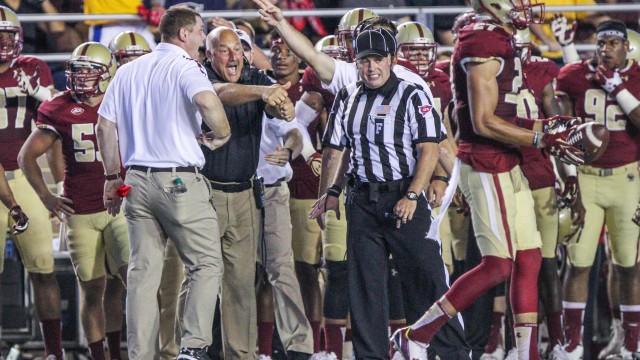 The 1989 movie Back To The Future Part II predicted the technological and social advancements of 2015 with almost impeccable foresight.

Those involved with the movie were able to accurately predict scientific progresses more than 25 years into the future. But even they couldn’t have anticipated the future of Boston College football just two or three months ago.

While many expected to have a good defense and a struggling offense, no one expected BC to be this good on defense and this bad on offense.

This season has been a lot to digest, but digest it we must. Seven weeks into the season is a good time for reflection. BC’s new starters have gotten enough playing time to accurately judge their progress, so let’s take a look at how each unit, spanning all three phases of the game, has done this season.

I get it. If Darius Wade had never gotten hurt, things probably wouldn’t be as bad as they seem right now. Playing a true freshman at the most important position on the field is not ideal, but it’s what BC has to do for the rest of the year. Given the circumstances, Jeff Smith has done all right—he was only just announced as the official starter this past week against Clemson. Since BC’s quarterback essentially functions as its primary rusher, the position has to be graded a little bit differently than it normally would. When it comes to passing, BC’s attack can’t get much worse. But Smith’s ability to run—he leads the team with 266 rushing yards—salvages a mediocre grade for the first half of the season.

By getting blessed with Andre Williams, BC’s all-time leading rusher, and Tyler Murphy, BC’s single-season quarterback rushing leader, the Eagles have been spoiled with elite threats on the ground in back-to-back seasons. So while the running backs this season haven’t been bad, they can’t touch the production that BC put up in its first two years under head coach Steve Addazio. Jonathan Hilliman sustained a broken foot in week three that will likely keep him out of action all season, and Myles Willis is only just returning to regular action following a few weeks on the mend. A quarterback is the Eagles’ leading rusher right now, which tells you a little bit about how Tyler Rouse, Marcus Outlow, and Jordan Gowins have filled in for Hilliman and Willis.

Since BC throws so rarely—and since the Eagles throw successfully even more rarely—it is tough to assign a grade to the receiving corps. Through seven games, Thadd Smith, BC’s leading receiver, has six catches for 158 yards and a touchdown. There are some college receivers who will put up that stat line in a single half. Again, it’s not necessarily the receiving corps’ fault, but that’s all that we have to go by. I was hoping for a little more from quarterback-turned-wide-receiver Elijah Robinson this year, but he only has four catches in BC’s seven games.

One of the biggest question marks to start the year, the offensive line has actually impressed in the first half of 2015. BC is fifth in the country in rushing yards per game, even with all of the injuries that its tailbacks have suffered. Rushing yards are just as much about the holes that the offensive line opens up as it is about the rusher himself. And while BC ranks near the bottom of the nation in passing yards per game, it isn’t because the quarterback hasn’t had enough time to find an open receiver and release. Sixth-year senior Harris Williams is the elder statesman of the offensive line, and he has done an honorable job of ensuring this unit is up to snuff each week.

Without a doubt, the front seven, but specifically the defensive line, has been BC’s best individual unit all year. The Eagles are still the only team in the FBS whose opponents are averaging fewer than 200 yards per game. The D-line can stuff the run, apply pressure when the opposition passes, and make tackles that players would have missed in years past. Harold Landry, Kevin Kavalec, Truman Gutapfel, Connor Wujciak, and Mehdi Abdesmad, as a group, are BC’s midseason MVPs. If every unit of this team was half as strong as the defensive line, BC would have the best team in the country.

The other unit that makes up the dominating front seven, the linebackers are the crucial link between BC’s suffocating run defense and formidable pass defense. Steven Daniels makes some plays that are so brilliant they’re hard to believe. Matt Milano is a force, whether he’s rushing from the edge or dropping back into pass coverage. There were a few lapses in pass coverage against Clemson, but the linebackers have been phenomenal through seven games.

Against Clemson, for the first time this season, BC’s stellar defense cracked. While it wasn’t entirely the secondary’s fault, Deshaun Watson torched the Eagles for more than 400 yards through the air, including nine plays that gained more than 20 yards. The secondary has impressed thus far in the season, but the blemish against Clemson holds it back from receiving an A. Despite that, John Johnson has been a real breakout star for the BC defense, and Justin Simmons has flourished in his final season at BC.

The Eagles have yet to miss an extra point more than halfway through the season, which is basically the only reason this unit receives a passing grade. The moment starting kicker Alex Howell went down with an injury that has kept him from kicking field goals (but allowed him to continue punting), BC special teams was doomed. Colton Lichtenberg and Mike Knoll might improve down the road, but neither has the consistency or the mental fortitude to be an everyday college kicker this season. Howell’s punting has ranged from good to very good, and he deserves a lot of credit for playing through his injury. But BC’s kicking game leaves too much to be desired at this point.

Sherman Alston has struggled mightily on punt returns this year—he’s fine once he catches the ball, but getting to the spot and cleanly receiving punts have been a big problem. Freshman Michael Walker has been a pleasant surprise on kickoff returns, which gives the return game a bit of a bump. Steve Addazio puts heavy focus on starting with good field position each drive, but the Eagles haven’t helped out their coach too much in that respect.

I hate to keep harping on this, but you could not manage crucial junctures of important games worse than BC has this season. Poor clock management has taken a number of points off the board at the end of halves, and a communication breakdown in the last seconds of the game against Wake Forest led directly to a loss. Addazio is one hell of a recruiter and could motivate the survivors of Custer’s Last Stand to just give it another shot, but his predictable playcalling and inability to manage the clock down the stretch has lost BC more games than it has won. On the bright side, Addazio and his staff have done a good job of preparing a number of freshmen and first-time starters to play significant minutes.