Nothing makes college sports fans more impatient than youth and inexperience. Unless a new player shines from the moment of his arrival, fans immediately bash their team for thinking that player had talent. This phenomenon especially affects teams that undergo significant change after a period of noteworthy success, replacing championship-caliber veterans with freshmen.

Boston College (3-4, 0-4 ACC) fans would begrudgingly agree that they fit into this category. Louisville (2-4, 1-2 ACC) fans share the feeling. But remarkable youth appears to be the only similarity between the two schools, with Louisville finally showing signs of promise as BC sinks into deeper ineptitude by the week. After a disastrous 0-3 start, head coach Bobby Petrino’s Cardinals have won two of their last three games. Even the loss showcased Louisville’s improvements, as it held Florida State to just six first-half points last Saturday, before succumbing to fatigue in the second half of its 41-21 defeat.

Louisville’s turnaround can be traced back to the emergence of true freshman QB Lamar Jackson. Petrino entered the season with three possible starting QBs—Reggie Bonnafon, Kyle Bolin, and Jackson—giving each a start during the first three games. After starting the second game against Houston, Jackson claimed the starting job for good in Louisville’s fourth game against Samford. As a true freshman, Jackson’s body of work makes him highly impressive. Despite missing most of one game, Jackson has amassed 467 rushing yards, fifth among FBS QBs, and five rushing TDs. He leads Louisville in rushing by more than 200 yards and has already topped 100 yards on the ground three times. With excellent speed and elusiveness, Jackson is a nightmare in the open field, similar to BC’s Jeff Smith.

That is where the comparison with Smith ends, as Jackson has also shown star potential with his arm. His appeal as a passer extends beyond his admittedly subpar statistics. Jackson has averaged a paltry 6.86 yards per pass, while completing just 54.5 percent of his throws and tossing five interceptions. The numbers are a bit misleading, as just two of the picks have come during his three-game tenure as the undisputed starter. In addition, last week against FSU, he had his best game of the season, throwing for 307 yards and three TDs against a very talented secondary. Jackson has shown a strong arm and the capabilities to make throws at all levels. His elusiveness translates well to the pocket, where he has shown a tendency to keep his eyes downfield, even while scrambling to avoid the rush—something young QBs rarely manage to do. He also has shown the ability to extend drives, as Louisville has converted 44.3 percent of its third downs, 32nd nationally.

While Jackson still struggles with making multiple reads, Petrino’s spread offense greatly minimizes the difficulty of the QB’s progressions. With four- or five-receiver sets, Louisville gets a lot of one-on-one matchups. The offense stresses the middle of the field, where linebackers must not only cover a multitude of receivers but also keep their eyes in the backfield, lest Jackson takes off to run. Quick screens to the outside also give Jackson easy completions to boost his confidence.

On Saturday, expect a very similar game plan to the one that Clemson ran so efficiently against BC last week. Louisville should throw much more than it runs, substituting the short passes for runs that will likely be snuffed out by BC’s stellar defensive front. Look for Jackson to exploit the Eagles in their preferred man coverage, especially against the linebacking core. In addition, expect Jackson to target leading receiver James Quick, who scored three TDs against FSU, downfield several times on explosive plays. It will be a long day for the BC linebackers, spending all afternoon in coverage while simultaneously spying Jackson.

Louisville’s defensive performance has varied this season. After losing six starters from the 2014 team, including superstar safety Gerod Holliman, struggles were expected for Todd Grantham’s unit. Some of the dropoff has been more precipitous than expected. After ranking 10th in rushing defense last season, Louisville has fallen to 45th in 2015, over-pursuing and missing tackles with alarming regularity. In addition, after totaling 40 sacks in 2014, Louisville has only recorded 12 in its first six games.

To make matters worse, the defense has shown an inability to end opponents’ drives, with opponents converting 41.9 percent of their third downs, 91st in the FBS. Struggles in the red zone have also plagued the Cardinals, as their unit ranks an abysmal 113th in the nation in defensive red zone efficiency. Despite some encouraging signs, allowing just 16 points across their two wins and the aforementioned six points in the first half of the FSU game, the defense has regressed across the board.

Still, Louisville has found ways to remain effective through momentum-changing plays, which provide a great way to overcome a leaky defense. Louisville has intercepted nine passes in 2015, despite Holliman’s departure, keeping its offense in the game. In addition, the pass rush showed signs of life last Saturday, with Grantham dialing up a variety of blitz packages to get to the QB. Grantham effectively shows more blitzers than will rush the passer, with the rush coming from unpredictable spots, aiming to confuse the QB when he sets up the protection. Against a veteran QB like FSU’s Everett Golson, there might not be huge amounts of confusion, but against the freshman Smith, Grantham’s defense could force numerous mistakes.

Against BC, look for Louisville to try everything possible to stop the run, stemming its slide in run defense efficiency. Still, look for the Cardinals’ front to struggle a bit with the physicality of BC’s run game and with being able to get off the field. When possible, they will look to force Smith into obvious passing scenarios, where their multiple looks can confuse the newly appointed starter. Count on at least one Louisville interception. Louisville must remember to keep a spy on Smith, as he possesses the blazing speed to simply outrun blitzers on multiple plays. These plays serve as BC’s only source of explosive offensive plays, something that Steve Addazio is painfully aware of.

Addazio pointed out that explosion is the main difference between these two young teams, noting that “they are young like us, but I would say the thing that would be different, is that [Louisville] is a very explosive team on both sides of the ball.” If both teams continue their recent trends Saturday, it could be a long afternoon for the Eagles. 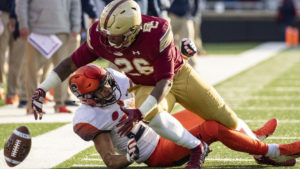 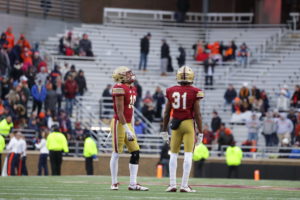 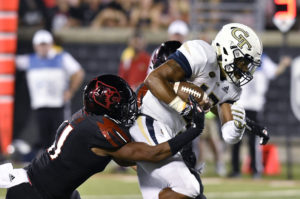