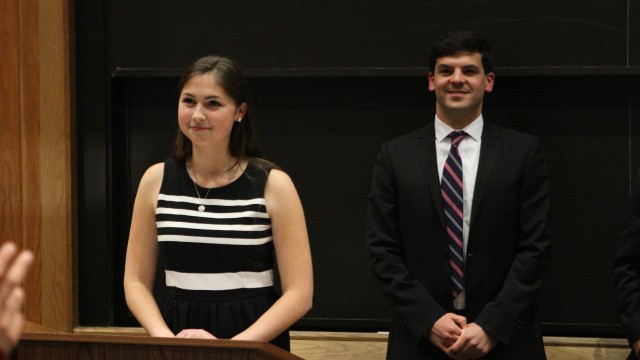 The Undergraduate Government of Boston College is launching two initiatives that give students tools to target or bypass restrictions around free expression on campus. First, the Free Expression Reporting form is an online way for students to privately report incidents in which they believe their free speech was curtailed. Second, the Ten-Student Service will allow students not in registered student organizations to stage demonstrations on campus (currently, only recognized groups can do this). If 10 or more students wish to demonstrate, they can apply to meet with UGBC within 48 hours of the planned event. They will then push the proposal to the Office of Student Involvement, effectively sponsoring the demonstration.

Both initiatives come a few months after the free speech and expression proposal pitched by UGBC last semester was excluded from the new version of the Student Guide released in September. The policy, which was passed by the Student Assembly, aimed to limit BC’s ability to control who could conduct protests and distribute fliers on campus. The policy also suggested that a Committee for Free Expression be formed on campus.

“This is taking control of what we can take control of…We can’t control University policy. This is something that we can do and I think it provides a tangible service to students.”

Despite the fact that this policy did not make it into the Guide, he said the conversation on free expression is continuing on campus, and professors, students, and administrators are now aware of the problem.

The reporting form is an outlet to track instances where community members’ feel their free speech was limited. With the data, UGBC will see whether they can assist the reporting party in reversing the decision, and over time, track patterns of reports.

“This is taking control of what we can take control of,” Napoli said. “The free expression policy was not passed—okay, it was passed by the Student Assembly, but it shows the limits of the Student Assembly. We can’t control University policy. This is something that we can do and I think it provides a tangible service to students.”

UGBC will consider two factors when deciding whether to apply for a demonstration on students’ behalf. They will consider whether or not the demonstration would violate the bias-motivated offense policy—that is, if it is motivated by bias toward race, religion, disability, sexual orientation, nationality, gender, or ethnicity.

Also, as UGBC will be responsible for the demonstration, it will consider the nature of it to protect the organization from liability issues. Neither the new plan for demonstrations nor the reporting form were formal resolutions passed through the Student Assembly, though members were included in the decision-making process—particularly the Student Rights Committee, one of seven committees in the Student Assembly.

Because both plans are more of a service than a policy, Napoli said it did not need to formally pass through the Student Assembly.
Napoli and Olivia Hussey, executive vice president of UGBC and MCAS ’17, noted that the action plan has two goals. First, the initiative gives students not in registered student organizations the opportunity to demonstrate in a more spontaneous, unrestricted manner. Second, it shows the administration how necessary it is to shift University policy.

“It will just further go to show that free expression is necessary on campus and it’s not just a one year fad,” Hussey said. “It’s not a phase that’s going to go away.”

Napoli is a strong believer that policy can affect culture, and he hopes to show students that UGBC is prioritizing this issue and will stand by them. In recent years, UGBC has primarily approached policy shifts in meetings with administrators behind closed doors.

Neither Napoli nor Hussey could recall a recent time when UGBC constructed an alternate method for students to work around administrative policies.

“A lot of times with UGBC, we say we’ll do things, and we get pushback from administration, and nothing happens, and years go by, and they’re like, ‘Well, we tried,’” Hussey said. “So now, with this, we are continuing to try with administration but we’re also finding alternative methods to create more and expand free expression rights. I think the purpose of a student government is to create change.”

UGBC free speech
This Year, Funding Has Been Cut For BC Jumpstart Program
The Dawn Of The Silver Age Of Television