Home » LTE: A Response To ‘The Heights’ Coverage Of Coates’ Talk 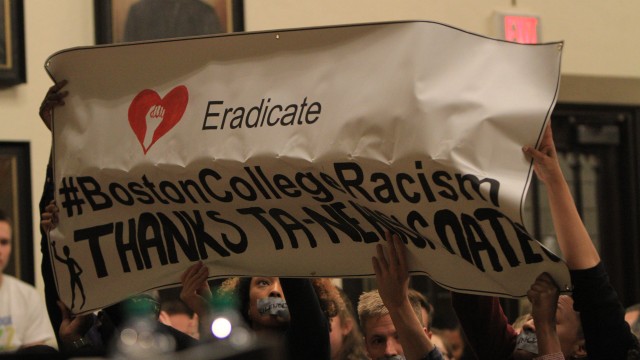 LTE: A Response To ‘The Heights’ Coverage Of Coates’ Talk

I truly did not intend to write. The Heights’ “At Coates Talk, Protestors Surface Narrative Of BC Racial Hypocrisy,” however, forces me to pick up my pen. While I do not want to criticize Shannon Longworth and Kelsey McGee, who wrote the story, their piece is indicative of a liberal hegemony that pervades so many college campuses around the country nowadays. We have become so accustomed to one point of view that we refuse even to consider any other than the orthodox “progressivism.” Of course, one might say, Miss Longworth and Miss McGee were trying only to report on what happened at the “Coates talk.” Yes, but that fails to address such descriptions as speaker Ta-Nehisi Coates’s giving his talk “…in a hall lined by portraits of Boston College’s 24 white Jesuit presidents…” There is no reason for the portraits’ description in supposedly objective reporting. When I read that, I did start to wonder when being white became a crime. Rather than objecting to the color of someone’s skin, shouldn’t we look more at that person’s character, morality, or even basic common sense?

I seem to recall someone saying that he wished his children to be judged not by the color of their skin but by the content of their characters. Yet the modern liberal mindset seems not to heed Dr. King’s words but to jump in, without thought, to condemn “white privilege” and “inherent racial hypocrisy,” without ever judging people not as racial beings but as people. The liberals’ obsession with race is not only erroneous but ultimately tiring. Miss Longworth and Miss McGee clearly sympathize with Mr. Coates and his opinions—one wishes he could not tell their sympathies so obviously. The writers also detail the goals of “Eradicate Boston College Racism,” a group whose members showed up in droves at the event, but there is no alternative point of view, no defense for the University. One sees in this story less of a news article and more of a polemic. I am not surprised, but I am disappointed. If the liberals’ relentless attacks on white people, on Christians, on conservatives, and on any dissenters from their absolutist dogmata do not end, I will not be surprised to find the whites and the Christians as the ones turned away from lunch counters and buses in the future, and the liberals will chuckle as their own power rises exponentially.

26 COMMENTS ON THIS POST To “LTE: A Response To ‘The Heights’ Coverage Of Coates’ Talk”