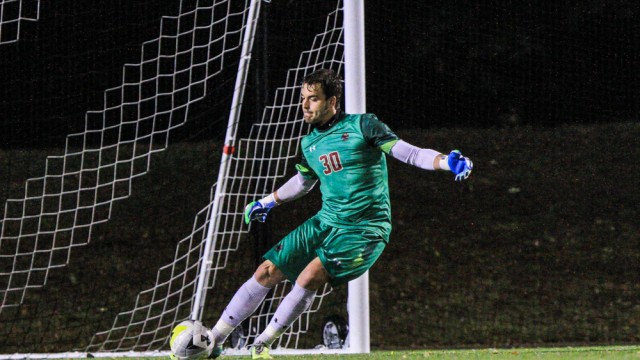 On Friday, Boston College men’s soccer took on the No. 4 Clemson Tigers for the Tigers’ Senior Night game in Clemson, S.C. The Eagles fell to the Tigers 1-0.
Following a short pregame ceremony honoring Clemson’s four seniors and a pregame handshake as mandated by the ACC’s Fall Sportsmanship Week rules, the game started with the Tigers in possession. They retained possession for most of the game, scoring in the seventh minute and controlling the ball throughout.

The Tigers had scoring opportunities from the get-go. One minute into the game they were awarded their first corner kick—although nothing came of that chance, they would score the only goal of the game six minutes later. Paul Clowes sent a through ball past the Eagles’ defenders. Thales Moreno found the ball in stride and sent a shot flying into the upper left corner of the net for his third goal of the year, giving the Tigers a 1-0 lead.

For the rest of the first half, Clemson dominated play. The Tigers created opportunities through corners and crosses, and shot seven times to BC’s five. Their shots tested the Eagles’ defense, while Clemson goalkeeper Andrew Tarbell handled BC’s shots with ease.

With 18 minutes left in the first half, BC’s starting goalkeeper Cedric Saladan left the game in discomfort to seek medical attention. He was replaced by senior Alex Kapp, who finished the game with three saves and allowed no goals, but the damage was done.

Play started getting more physical throughout the half, resulting in yellow cards for BC’s Idrissa Bangura and Clemson’s Kyle Fisher before halftime.

Clemson continued to control play in the second half. Its heavy pressure on the Eagles led to countless scoring opportunities, although they failed to capitalize on any of them, finishing the game with 13 shots. With 16 minutes left, Clowes created the most exciting moment of the game as he attempted to score off a bicycle kick. His shot went just high over the crossbar, preserving the score at 1-0.

The game continued to get chippy and physical, despite taking place during the sportsmanship week—a week for teams to showcase their good values through pre-game handshakes, fair play and social media campaigns highlighting the importance of sportsmanship. BC amassed two more yellow cards—one for Mohammed Moro and the other for Kapp. The aggressive play peaked, however, with 25 minutes left in the game. Clemson’s Saul Chinchilla fell to the turf after appearing to be kicked in the head or neck. Heated words were then exchanged between various players, and referees and other teammates had to separate the two teams to prevent any fighting. Meanwhile, fans screamed for a BC red card.

After 90 minutes of tough play, the game ended 1-0 in Clemson’s favor. Tiger fans, who packed Historic Riggs Field and kept the energy high with their cheers throughout the game, erupted as the Tigers won on their Senior Night. A lack of real scoring opportunities and failure to control the game contributed to the Eagles’ loss.