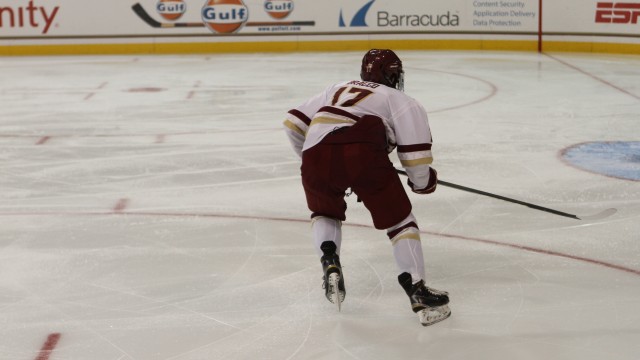 After a swift blow to Boston College’s pride last summer, when Sonny Milano suddenly de-committed from the program three days prior to school starting, head coach Jerry York has been burned by another highly-touted freshman. Jeremy Bracco, the speedy forward from Freeport, N.Y., has decided to bolt for the OHL’s Kitchener Rangers on his path to the NHL.

In five games, Bracco showed flashes of brilliance working with Alex Tuch and Zach Sanford on the first line. He didn’t notch a goal, but had three assists, all coming in the same game against Colorado College.

This shouldn’t come as a surprise. Many were shocked that he had come to BC in the first place instead of opting for a potential AHL contract with the team that drafted him, the Toronto Maple Leafs. His potential impact on the team was a large reason why BC was ranked No. 1 overall entering the season.

But don’t worry about their prospects from here on out. The Eagles will do just fine without you, Jeremy. Don’t let the door hit you on the way out, bud.

Last season, as we all know, BC was built on its impressive stock of top-notch defensemen. When Steve Santini went down in December, the Eagles filled in with Teddy Doherty. That experiment worked. Doherty excelled in the role, while it led Noah Hanifin to pick up more minutes. The latter, now a member of the Carolina Hurricanes, showed significant improvement over the course of the year.

Had one of BC’s few top forwards fallen to injury—and based on their play in 2014-15, I’m limiting that list to Tuch, Sanford, Ryan Fitzgerald, and Adam Gilmour—the Eagles would’ve really had issues. No disrespect to last year’s senior class, but the likes of Michael Sit, Destry Straight, and Cam Spiro don’t scream “elite players on a championship team.” If one of those four had gotten hurt, York would have had a big problem filling that gap in productivity.

That isn’t the case this season. The Eagles have plenty waiting to replace Bracco on the top line. Tuch and Sanford, the star sophomores, are back playing with Gilmour, their former linemate. So far, they’ve returned to that same high quality that they played at last season.The elder Fitzgerald is still here, too.

But look at the newcomers and the up-and-comers. Juniors Austin Cangelosi and Chris Calnan have looked impressive in their first few games. Two of BC’s freshman forwards, Miles Wood and Colin White, have excelled early on—they’ve played much better than Bracco has, I must add. Christopher Brown, himself, has been surprised with how quickly he has adjusted to the college game. This also gives a prime opportunity to Chris Shero and J.D. Dudek to step into more minutes and increase their values. They may be playing on the third and fourth lines, but their ceilings aren’t as third- and fourth-line players, the way Straight, Sit, and Spiro were destined to end up.

Maybe, however, BC’s forward talent won’t matter given the way its defense has played. Before we get too carried away, let’s recognize the teams BC has played—Army, RPI, Wisconsin, and two against Colorado College, which have a combined one win. Not exactly offensive juggernauts.

Nevertheless, we can’t ignore the performance that Thatcher Demko has put up so far this season. The junior goaltender has been a brick wall, giving up three goals in five games. Demko has shut out his opponents in each of his last three games, making him only the 21st netminder in NCAA hockey history to do so. Plus, it’s BC’s best defensive start ever, the closest of which came in the 1963-64 season. I’m not saying we should expect this same quality defensive performance from both the blue liners and Demko all season, but it’s amazing what healthy hips can do for a man.

In fairness to Bracco, his style of play was simply not fit for college to begin with. He’s only 5-foot-8, which won’t match up well against men who are almost four years older than he is—think defensemen like the Chicago Blackhawks’ Mike Paliotta, the 6-foot-3, 203-pound bruiser who bodied the Eagles into submission for Vermont in last year’s three-game Hockey East Quarterfinal. Bracco is not the dynamic skater that Johnny Gaudreau was—bigger bodies will demolish him. He will, however, thrive in the OHL against players who should be closer to him in the size department.

Most importantly, this decision comes down to a detriment of Bracco’s character. According to several sources, Bracco was at practice as early as yesterday. From many reports, BC’s staff—and more importantly, his teammates—had no idea that he would be on his way to Kitchener only one day later. As Demko made it clear earlier today on Twitter, that’s not a guy that you want on your team. He retweeted reputable team insider @bchockeyblog1’s angry comments about how Bracco abandoned his team and coaches.

It’s hard to blame a kid for picking what, in his opinion, is the right choice for his professional career. And if Bracco thinks that’s through the OHL, then, for his sake, I hope it’s the right decision.

But it’s hard to believe he wouldn’t have gotten effective training at BC. There’s plenty of time to spend in the weight room with BC’s … decent facilities. Many players have rolled through Kelley Rink on the path to excellent NHL careers, whether they stay four years (Kevin Hayes, Brian Gionta, Cory Schneider) or just one (Hanifin, an All-Star in all likelihood).

And we can’t forget that much of that has to do with the greatest coach in the history of the sport. York, who will be the first man to pass 1,000 wins in college hockey later this season, consistently emphasizes putting the team over one’s individual accomplishments. If Bracco was willing to give up his commitment after playing a mere five games in college, it’s doubtful that he would fit with that mission. York’s success is built on that mission, and keeping a guy who cares more about his career than the team will only hinder BC’s quest for a sixth national championship.

Over the summer, many people in the BC hockey community were thankful that Bracco didn’t turn into Milano. In the end, he turned out to be much worse. But BC will be just fine.