Home » On The Second Floor Of Carney, A Showcase For Student And Faculty Art 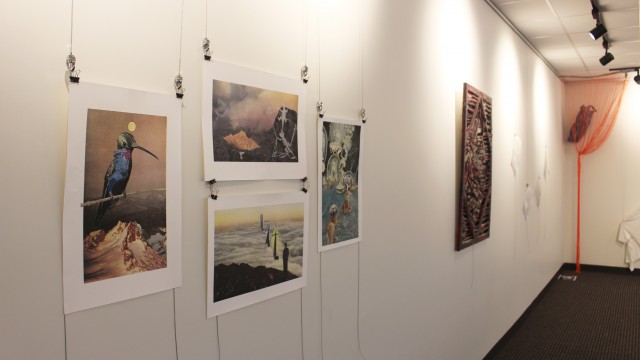 On The Second Floor Of Carney, A Showcase For Student And Faculty Art

Beginning next week, students and faculty will have the opportunity to display their art in Carney Hall. The first official exhibit opens Nov. 2 with visiting professor Sammy Chong’s work on exhibition. This gallery was renovated over the summer and is available to Boston College students, faculty, and staff to showcase their work.

After the Bapst Art Gallery was shut down due to issues with accessibility, among others, there has been a push for a dedicated space for the display of student and faculty art, Vanessa Maramba, a graduate assistant in the Boston College Arts Council, said.

Through the efforts of the Arts Council, the Office of Student Involvement, and Space Planning, a gallery was created in Carney Hall Room 203.

“It’s really for the students and faculty, so we are very open to what people would like to display,” Maramba said.

Prior to the first official exhibit, a temporary exhibit called Artifact by students in the “Contemporary Issues in New Media” class will be on display from Oct. 26 until Oct. 30.

This exhibit is made up of a combination of wall pieces, sound art, and video.

Chong’s work on display is titled “The Pilgrim,” and will run until Dec. 4. An opening reception will be held Nov. 2 from 3 to 5 p.m.

“It is inspired by some etchings I found made by Rubens in the early 17th century about the life of St. Ignatius of Loyola,” Chong said.

He explained that he had discovered the etchings during his education and later when revisiting his notes, saw the etchings.

“I found a whole collection of etchings made by Rubens and decided that I could use that narrative of the story of the life of St. Ignatius to talk about what it would mean to search for meaning in the 21st century,” he said.

Chong explained how he scanned the images of the etchings from the Burns Library and subsequently printed them on canvas to form the basis for his oil paintings.

“I was trying to recast the life of Ignatius from the perspective and concerns of modern generations,” he said about “The Pilgrim.”

When he found out about the new Carney Gallery, Chong approached Sarah McDermott, director and program administrator of the Boston College Arts Council, to display this collection.

“I always felt that it fits with the overall goals and vision of Boston College, a Jesuit University that is trying to infuse within the students Jesuit values,” he said.

Though he did not create the collection for this purpose, it was a coincidence that the subject he was painting fit so well with the values of BC, and he decided to give it a try, he said.

Chong encouraged everyone to use this space to their advantage and to be proactive in creating artwork in any form, whether it be paintings, photos, prints, sculptures, or installations.

He also commented that this new gallery will be a good space for the display of 3D art such as sculpture and installations, as there are not many areas on campus where such works can be exhibited.

“I encourage everybody to do work that they feel confident about that is solid in terms of concept and in terms of execution to be seen by the larger Boston College community,” he said.

art student work
Lower Campus Printers Stalled In Logistical Limbo
‘I Was Like A Kid In A Candy Store:’ Senior Member Of The U.N. On Success